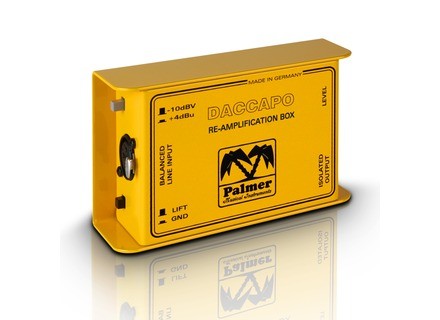 Palmer DACCAPO Re-Amplification Box
5
I've had it for some months now and have had the possibility to use it with different sources (guitars, basses, synths) for different applications (amping and reamping but also to send the signal to hardware processors).
The result? It does the job. To compare it to the Radial would be comparing six of one and half a dozen of the other, but you have to admit that Radial does a better marketing job.
Finally, regarding the debate around the intrinsic utility of this type of boxes, it depends a lot on the source signal and the time you have to dedicate yourself to process it; in other words, you'll gain a considerable amount of time.
Did you find this review helpful?yesno
»

Palmer DACCAPO Re-Amplification Box
5
I have only used this small yellow box once this August for a reamping session for a project I'm currently working on.
I have no way to compare it to other models, since it's the first time I ever do reamping!
It has a very sturdy look (and I think it is...we'll see how it ages) and has a nice yellow color. It doesn't take up too much space on my desk.
I don't have the impression that it colors sound, it's very easy to use! You simply plug in and reamp!
A friend of mine recommended it to me and, for its price, I would surely buy it again!!!
Did you find this review helpful?yesno
»

Palmer DACCAPO Re-Amplification Box
5
The Palmer DACCAPO is a robustly built passive re-amping box that converts line level, low impedance signals to High-Z, or high impedance signals for use with guitar amplifiers and stomp-box effects. It is entirely passive, therefore does not require any phantom power or external power source. Despite it's simplicity, it does exactly what is says it does with great aplomb.

For guitar recording enthusiasts who like to have more flexibility later on in the mix, re-amping is incredibly advantageous. In my case, I record both my live amp sound and DI signal of the same performance to two separate tracks. I split the signal right from the guitar using a DBX DB12 active DI box. Having the dry performance straight from the guitar archived in my recording session makes it much easier to edit sections, adjust timing and re-amp later for changes in guitar tone and effects.

For example, let's say in your original performance you had a used a phaser on an electric guitar solo. Upon playback, you decide you want to edit out a few sections. Due to the complicated waveform of the full recording and the inconsistent timing of the phaser modulations, this would be almost be impossible. However, the dry signal will have a much more simplified waveform with no modulation, making it easy to pick out singular notes and to modify the performance. Then you can simply send the edited dry signal out of your soundcard to the Palmer DACCAPO and then back through your effects chain and amplifier. You can also loop a section of your performance and with your freed hands you can adjust pedal effects on the fly, which is perfect for dialing in timing for delay and tremolo effects.

The ability to free up your playing hands and to reamp your original performance, opens up many creative possibilities with guitar pedals. If you scour YouTube for some videos of renowned mixing and recording engineer Eddie Kramer, you're bound to find some clips of him doing this very technique! By re-amping archived, dry performances, you can use your hands to improvise with a wah pedal or with feedback-induced delay swells. Additionally, the re-amp box opens up your arsenal of stomp-box effects to any sound in your mixing session, meaning you can re-amp synths, vocals and all other sounds sources.

While the sky is the limit in terms of the creative possibilities afforded by re-amping, I'll put up a simple test of a clean guitar:

To further demonstrate the effectiveness of the Palmer DACCAPO, you can refer to the attached image comparing the waveforms.

Ultimately, I would recommend the DACCAPO to anyone looking for an inexpensive utility tool that can greatly open up their creative horizons outside of the box. As the reamping box opens up the whole mix for use with the pedals, this will be especially appealing to guitarists, who have invested heavily in pedal effects but are lacking in rack units and plug-ins, .

PROS
+inexpensive gateway to infinite creative abilities outside of the box
+effective and accurate recreation of the original performance
+solid construction
CONS
-Only an XLR input, which will require most home studio users to get a unique jack to XLR Output cable for use with their soundcard outputs.
-For the more serious reamping enthusiast, one should also consider an active reamping box, like those made by Radial.
Did you find this review helpful?yesno
»

Palmer DACCAPO Re-Amplification Box
5
I connect this small box to the TRS jack output of my Steinberg UR824 soundcard.
It couldn't be easier, you connect, adjust the gain if needed and start reamping,
This little metal box seems super sturdy, it comes with 4 adhesive rubber pads.
No noise nor interferences! I tested it with Engl and Hughes & Kettner tube amp heads.
Did you find this review helpful?yesno
»

Published on 05/18/09
Palmer has announced they'll release a new reamping box by the end of the week.