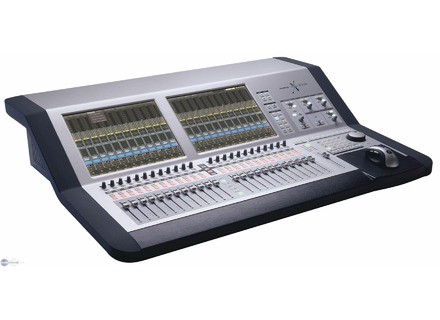 Mackie Digital X Bus X.200
5
You can read a little bit of everything on this console. I still wanted to supplement and / or clarify certain issues.

A few months before my purchase, this console was still about 30.000euros (in my version see below). I would come in more detail the components used and qualitée of these.

For baseline characteristics veiled basically all that comes to mind and not lose too much time:

The Working! Its strong point!

Devised a console brewed up digital signals, automate the console, having a control surface for the software we use, loading a project in a few seconds while the patch and configure visual and interaction icroyable human / machine ... This is awesome.

I tried an equivalence and it is very difficult to find without sacrificing features. Working comfort is simply the best I have ever encountered. I really like the Yamaha DM2000 and Sony DMXR100 but the comfort of the past can not hold a candle to the Mackie DXB200.

About crashes: It&#39;s very simple ... This is a problem with the Midi sync. I assure you that ALL crashes (rare) that I had at the beginning was a mistake and / or Midi configuration (automation, control surface emulated sync image ...) once configured ... it works perfectly.

Both problems use are:
1 / Noise of ventilation that can be changed once frankly declined.
2 / manual delay compensation VST (when output ProTools was at the same point then ...

From the moment users know that they XPe architecture and imagine that you can do anything with it! ... and plant ...
I know I did it myself in the beginning ... Once it is quiet and you ca use it as a console. It is very stable and reliable. For Tascam and Yamaha already had (several years) I do not regret anything at all (especially not the Tascam)

Nobody ever talks about the sound of this console and that&#39;s a shame. Well it is digital so we will talk mostly preamp / converters and micro

Converter is the AKM 5394a (I remember you back to ca per message) circuits with Burn & Brown upscale analog part. Roughly 95% identical to the RME and RME OctaMic 8DS. And this is the model just below the converter UA2192 (pin compatible for aventuriés). Part convertion is strong enough I sold at the time as my RME converters render sound very similar look better in the subwoofer.

In the studio I Neve1073, ChandlerTG2, Trident S80 (voila for more colorful) évidament there is no magic that you can have with these references but the sound is in all respects identical to the Hearing / RME (tested on several scéances). The preamplifier is perfect for rhythm parts. on the other hand for singing and other main track a large slice of good will when the colorful pro key to your projects.

ADAT card to avoid the above 44khz because they are not all day
The FireWire card to avoid completely because it may offer features and it causes crashes like Tascam, as in Motu and digidesign003.

The big price drop qualitée devalued the real sound and technique of this console. Once the console hands, compare it to others and you will see that to find the comfort, options, qualitée you should reach a pretty penny and sometimes scrifiant options.

Thomann helped them to malgrés this vision sold between 3200 and 2800 euros (without options acune) she took a nasty blow to his popularity. The worst is that some sites had yet to 17,000 euros (without options) at this time. I know of more than a few months before I was a quote by a Parisian club with a total approaching 30,000 euros. When I saw the offer Thomann I did not wait a second longer. I have a thought for those who bought ç this price ...

Do not miss this console ...

Last thing: Use it to AES / EBU and Analog few cards is the best configue.

philippemoebius's review (This content has been automatically translated from French)

Mackie Digital X Bus X.200
4
Great console. Nothing to say great work, I have inputs and outputs in ADAT (The cards are optional) compatible with VST plugins notament the waves .. Eq A and B can morph ab .. ect In world clock

The config is yes touch screen or two with a USB mouse .. trs intuitive but can be for the civil Midi with Nuendo, the manual is in English. No damn good also trs.

Filter ben-level meter can be a UAD card. In addition I do not use filters. I have two racks on the Manley Massive passive EQ and a Compressor and Limiter Manley MU output. Also the TC Reverb 6000 home, and all these people work well together ... trs

I've had about two months. I love this console. so far no problems. on the other hand config problem between Nuendo and Mackie DX Bus. Required to have an M Audio Midi 4x4 card that does make more also.
Price level? One can expensive for my taste. Besides the additional cards as an option.

Level choices? Yes eSite can be with the tascam DM 4000. But Mackie DX BUS is a nice console trs ..
Did you find this review helpful?yesno
»

itchounet's review (This content has been automatically translated from French)

Mackie Digital X Bus X.200
2
A superb digital mixer with a per Eq, compressor and gate and routing capabilities incredible! Reverb and multiband compressor are also available from the outset on the console. A serious impression emerges from the console, with incredible finishes and a great look! After this first observation is the branch: it is not silent at all! Note: Mackie played it tight on the map with this modular console, in fact nothing is included with the console from the Sync Card, for you to pay a few hundred dollars more for the enjoyment of mic and line cards, ADAT etc. ... The mixing console is directed primarily ...

A very simple console take over as having a very readable and neat interface (thank you 2 touch screens), you have the slices and routing capabilities at your fingertips. Speaking of touch screens, they are not multitouch and are not super responsive, that is sometimes painful, I advise you to invest directly in a style made for it ... 3h on the console and a passive reading of the manual 't have enough to use the console session. The faders are very nice too. Brief as the console market, it is very nice! But when the software starts buger, you can stop the session: freeze faders, loss of sync, touchscreen down ... It is a console that is really too far ahead of his time, and was poorly thought through mackie a technological standpoint.

At the preamp is approached quite sound the Onyx range of the same brand I think it quite bland, fairly soft but sufficient for small projects or as Additional preamps. The Eq is not too bad either, the compressor is bad enough, however (relatively speaking). But what he is good that is that the console can manage external plugins and above are provided slots for inserting cards UAD! A console "interface" to some extent, an extension of your computer. It does not degrade the mix, however do not expect mixer with internal effects of the bikes, in my opinion insufficient, or even make its own decision with the preamp to the table ...

I have used the 3 months intensive DXB before she falls down ... Intolerable for a console of this price, the touch screen on the left broke down, I got to get a refund for the console my dealer service department so Mackie is idle (after months of waiting, scandalous ..). Mackie made a console moldy, and they know it ... The console would have been a wonder if she had been more developed, but the fragility of its design and software bugs make her a console anecdotal (see to avoid). Many features advertised do not work (at least on mine), and certain features can not walk that was provided to invest again (like the Mackie Control function does not work with some interface). In short very disappointed by this product for my part, and many echoes make me say I'm not alone!