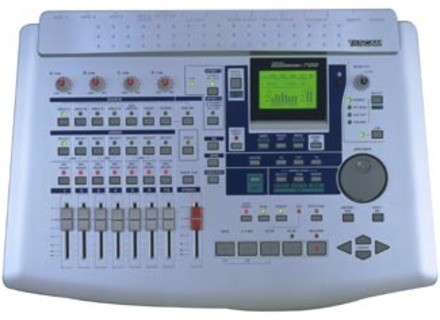 Tascam Portastudio 788
3
I bought this at at musiccenter in Belgium for 750 euro. I needed a digital recorder to record my musical ideas I also wanted to make a CD out of my songs.

First of all, This unit is the only one in this price range to have 24 bit recording capability. I downloaded about 10 mp3's made by the Boss Br-1180 and 20 from the fostex VF-80 just to compare the difference between 16 and 24 bit. I can really hear the difference in sound quality. I'm very picky when it comes to sound quality because I play the trombone and I'm studying music. It can play 8 tracks at a time and it can record 6 tracks at once, it has 250 virtual tracks, 999 levels of undo although some who has reached that much undos should just start over. It has a waveform display unlike the Boss Br-1180. The manual was ok. I tried placing 1 mic infront of a trombone quartet and it sounded excellent except for the phone ringing and the door banging in the background. It has a very nice form and the knobs are very firm. (Wow, am I talking about my girlfriend or recorder??) It's has a 10 gig hard drive which is enough for 1 album but the drive can be replaced. The costumer support was just amazing. I bought it with a version 1.10 system so I emailed tascam Germany and they said that version 2.0 was coming out so they decided to send me an upgrade cd. I didn't have a cd drive for the tascam so they sent me an eprom microchip instead. It arrived here in the Philippines in less than 2 weeks. That was really quick. The sound quality is really good. Check out my songs so you'll know what I mean: www.nowhereradio.com/slidemasterx/singles

What I don't like about the tascam is that you have to buy a separate external cd burner to be able to back up, or import/export files. It only has a digital output. (no input). It doesn't have a built-in mic which I really needed because my ideas spring out during unusual times like when I'm in the shower or while I'm sitting on the toilet bowl. It's heavy and doesn't have batteries. I need to record during the vacation. One big factor that led me to buy this was the user forum on the tascam website but after I bought this, they closed it down. There is another 788 forum but with fewer members. it on: www.cmoore.com/forum
I had a difficulty with the effects because as a newbie, I needed EQ and reverb presets. The 788 only had 1 good reverb preset but there were lots of wierd effects for vocals and guitar which I didn't really need. The boss and fostex had a lot of presets.

The 788 looks solid to me. just don't drop and bash it around because it has a hard drive. It only crashed once. I just restarted it and everything went fine. I wish they made a softcase for it.

Well this unit is pretty good and it's better than other brands in the price range. It costs $600 now and a lot cheaper used. If you're experienced with EQ and effects then the 788 shouldn't be a problem for you but If you're a newbie who just wants to record ideas and you need presets, then you should get a boss br-864 or tascam pocketstudio 5. There are a lot of features on the 788 that I don't use. I should have waited for a few months until the Boss br-864 or Zoom mrs-802 came out. I regretted it a lot. Overall this is a good unit if you have a background on recording already.

Tascam Portastudio 788
5
I purchased the 788 after much internet research. I'm new to recording, and decided that it offered a lot of flexibility for a decent starter price. I paid approximately $900 through an online retailer - Musicians Friend.

At its most basic level, it is VERY easy to use and the manual is mostly self explanatory. It has 250 virtual tracks per song which, for my use, assures that I will never run out of space. Records at 16 or 24 bits. Non-destructive editing and a fairly simple editing structure. Pretty good effects tweakability. Tascam provides a very useful and up to date online service forum which I've used extensively to clear up any misunderstanding between myself and the manual - excellent resource for beginners like myself to explore the recording world.

Multi effects can only be applied to one track at a time which is frustrating at times. Example: If I record two guitar tracks and want to add flange and reverb to one track and a little distortion and reverb to another, I have to bounce the first track to an unused track, and then change my effects settings and bounce the second track. Since there're so many virtual tracks, its not such a big deal . . . but it does involve a lot of track shuffling. The manual is mostly self-explanatory. There are a few sections that are a little fuzzy and don't seem to illustrate the full capabilities of the unit.

The construction is very nice. It's buttons, dials, and little lights are well organized and obvious, making it easy to navigate, although the display window is a little small. I've had NO problems with the unit, although there have been many reports of software difficulties in some of the earlier versions. Software upgrades are easy to get, however, and free. Pretty small and compact which make it good for portable recording sessions.

I think the 788 is an excellent option for musicians ranging from complete beginner to experienced recording artist who wants something to work on at home. It is capable of producing very high quality sound recordings, and optional CD burners make this a very easy process.

Tascam Portastudio 788
4
I ordered through Full Compass Mail order, and paid around around $1250.oo .

I feel that the 788 as with all the other new Hard disc based desktop recorders has an initial learning curve requiring some diligance to master. However, once I got a feel for the digital mixer interface, the 788 was easier to use than most other units. If a user has had any experience with the older tape based Portastudios, then this one will make you feel as if you finally got your sundae with the cherry on top !
Boasting uncompressed 24 bit 8 track recording, and 250 virtual tracks (all save-able) you won't be pulling your hair out with quality loss usually associated with bouncing and mixdowns (which are undoable as well) The onboard compression is fairly adequate, and adjustable per track, its like having a separate compressor for each track. The EQ works in much the same way, although a bit tricky to visualize a curve from a few numbers on a screen.
Mastering is a cinch, more on that later though.
Another nice feature is the wav edit-jog/shuttle, for mostly precise editing of a track.Simply set your in & out point, and wha-la cut, paste, punch in, silence, whatever you like on your pizza. The display is easy to read, and even the waveform editing is simplistic.
Midi control of external devices is a snap, and in addition to the 8 actual tracks, Tascam has provided a real submixer section with 8 additional channels for your virtual instruments and effects, adding up to 16 actual channels of final recording at 'mastering'. This is very useful considering the 8 recorded tracks are assumably already recorded and mixed from the various 250 virtual tracks, leaving drum machines, keys, and sequencers for the submixer section and controlled through the midi clocking. Ghost tracking is very easy with the onboard metronome.
The guitar amp simulators aren't bad, some are relativly usefull (although many leave something to be desired).
One more thing most salesman don't know about.... if you have a problem, online tech support is pretty good, with a company moderator, as well as a whole host of other users available on the Tascam BBS. (Fostex could learn from this).

You'll need a good mic preamp and a good studio mic, at least for vocals anyway. this is pretty common though, particularly with digital recorders.
Learning the effects routing will take some getting used to. Routing to effects outside of the unit is a bit tricky at first. And the manual does a loose job of explaining this. The biggest peeve with this unit is, get ready..data backup. three CD's for an average song with a few virtual tracks, and can take up to two hours (thats a twelve pack and a movie folks). Although there have been a few software upgrades to fix some of the data backup issues, they still have a ways to go.
As far as mastered recordings, the CDR788 lacks in the audio quality, and will generally need to be ripped and mastered (normalized) on a PC in order to kill some of that 'demo' sound and help your final tracks breathe more like a professional release. The biggest nag besides Data backup is no support for .wav export, however, being a scsi device, I think there could be a software upgrade for this in the future...we can only hope. The Tascam BBS has breathed a bit of this as well.

The case is well constructed and strong enough to inspire confidence moving it around, with all patch points on the rear, and out of the way. The faders are firm, the four trim knobs, a bit wimpy feeling -dont drop anything on 'em though! The surface is well laid out, and intuitive with an easy to read adjustable LED.

Ok, get ready, this isn't your Daddy's Portastudio. With some good mic pre's and a few additional outboard units, a recording of 'label' quality is possible. More remarkable is the sound quality instantly acheivable, even by a novice. But, do some reading, compression can be ugly, and this box will do what you tell it. Don't be afraid of the lack of knobs, the menus are easy enough. A solution for wav file export is a must, but patience....compared to other digital hard disc units, this one tops 'em. With 4.5 not available, I'll give this a 4. A smaller learning curve, and ease of use and quality we expect of Tascam. Before buying Roland, Korg, or especially Fostex, give this bike a ride-its all downhill from here.