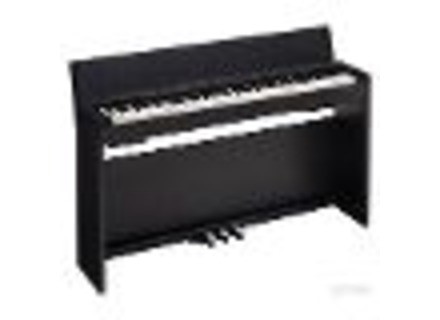 Privia PX-830, Digital Piano from Casio in the Privia series.

Casio Privia PX-830
2
It's woodgrain painted jet black, a really, really beautiful finish. I think the best word is that it looks almost 'stealthy' the way it's painted. It's really small as digital pianos go (see Casio's site for details), and with the top down it makes a great coffee table when you aren't using it. I've been a professional musician for most of my young life, playing keyboards in churches and musicals since I was 10 and playing in various bands on keys and bass guitar since I was 12.

Got it through MusicGearReview.com, straight from the Casio representative. They go for about $1000 new, which, feature for price, isn't bad. Still, the higher end keyboards, the Celviano line, that Casio sells only start at around $850, so I recommend looking at them first.

I like the feel and the sound of the organ and electric piano settings. I like the look of the unit, as well. It was also very easy to set it up as a MIDI controller with Finale or Sibelius during testing. I also like that it's very small, portable, and light.

I don't care for the Function button and using keys to change settings, and I ESPECIALLY don't like the 'ping' sound that happens every time I switch sounds or settings. I like to have a display in front of me and buttons for all the different things so that there is never any confusion as to what my current settings are and I can make quick changes live. I was not impressed with the piano sounds, either, which were thin and lacked any midrange presence. The action felt springy for a digital piano due to the lack of a hammer action. This piano only featured counterweights. Casio can do better with key construction as well. Keys move side to side, not as much as in older models, but still enough to be noticed.

It's well made, although assembly can take an hour or two. I wouldn't trust all the screws to hold together in a house where roughhousing was a regular activity.

It's a decent piano for home use, but there are cheaper and better options from the SAME COMPANY. I don't care for the format of the dashboard. The feel is awkward and doesn't much resemble a piano. The piano sounds are thin and not very well done. I wouldn't pay $1000 just for the jazz organ or electric piano sounds, even though they were done rather well. It's just not worth it.

The sounds are very correct, obviously there is better but it is much more expensive!

Used 2 years. I went on an acoustic piano for classical studies. Very good piano plus a very classy look, this is silly, but in a room that is not negligible.
Did you find this review helpful?yesno
»