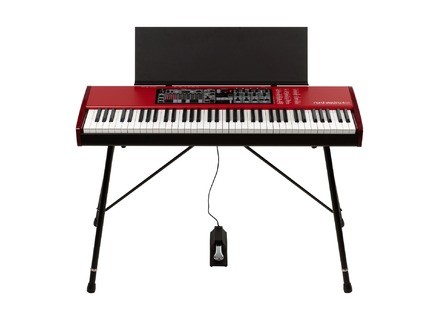 Sergio23's review (This content has been automatically translated from French)" This is NOT 4HP fantastic!"

Clavia Nord Electro 4 HP
5
It is a 73-key hammer keyboard, so six octaves ranging from Mi to Mi (NE4 hit the waterfall from the Fa Fa).
Connectivity: Midi, USB ...
The number depends on the weight of sound sounds loaded in the internal memory. Basically, I think there should be any 40 sounds (grand pianos, upright pianos, electric pianos, organs, synths ...).
The sounds can be edited fairly intuitive.
The strong point is portability. Only 11 kg, it is really super nice when we have to move! In a soft but solid cover, it's almost like carrying an electric guitar.

The configuration seems simple enough, and yet I am not a fan of technology and hacking.
The manual is not very thick, but it was enough to find and do what I wanted so far.
Editing sounds and effects is really easy. It's a real keyboard scene, no submenus in the menu. We want a reverb, the reverb is switched hop. Need an equalizer, just press a button and adjust the knobs directly accessible. We want a bit of distortion on an organ, you press a button and a knob is turned. It's that easy!

This is where I'm in heaven!
The sound is absolutely fantastic! I did not need to look or change anything. Grand pianos, electric pianos kind Rhodes and Wurlitzer and Hammond organs are incredible! The sounds are super hot and deep. The drawbars for organ are very effective! Leslie simulation is a killer!
If the sounds are realistic?? When I play the piano, I feel that there is a real piano in the room!
The effects of electric pianos are tops and really allow you to change the sounds, making them fatter, dirtier, this is stunning!
I use two pianos, 2 electric pianos, 2 organs and accordion tears. That's all for now, but it's perfect! This is the best keyboard that I've played so far. Apart from Roland, Yamaha and Korg are very good though, it really is a cut above!

I use it for 2 months.
Before, I had a Roland that I liked but weighed nearly 30 kg.
And to move in rehearsal or concert, it was horrible.
My criteria were the size, weight, quality of sound and touch, and the Nord Electro 4HP, I found exactly what I was looking for.
I tried the model with the touch Waterfall but as I mainly piano and electric piano, I preferred the heavy NE 4HP touch. I also tried the Nord Piano 2, but I have not found a big difference so I opted for NE4HP that more organs and drawbars. It seems that heavy touch is better on the Nord Piano 2. I did not find it obvious ...
The price / quality ratio is a complicated and somewhat subjective in my concept. In my case, I would say that if this keyboard is robust over time, then the price / quality ratio is very good even though I know it's expensive.
With experience, I would do this choice without hesitation.

Published on 09/29/12
Clavia have announced the arrival of their new Nord Electro 4.