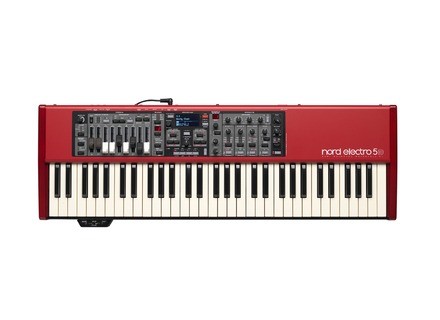 -The keys’ touch seems to me slightly better than the 4D version, as I play more easily some piano pieces which were problematic.

-The knobs are smoother than the 4D version, and they don’t move on their axis. I prefer the way they feel.

-The drawbars have slightly changed, now they’re even more comfortable

-Ergonomically, perfection is within reach

-The compact and lightweight format with a free and customizable sound library is perfect, especially with 1 GB for piano sounds and 256 MB for samples.

-The effect section is better, with more settings for some of them: Phaser/Flanger/Chorus/Vibe with a "deep" switch

-The tube distortion sounds very musical – I love it!

-A new split feature – at last! You can play 2 different sounds in the same time, or organize them in layers to enrich the harmonics: it sounds just great!

-The church organ is a really good feature, use it alongside a harpsichord and you can access perfect sounds for a gloomy/gothic/classical ambiance, hmmmmm!

-The screen is a perfect example in terms of simplicity and ergonomics, with a perfect contrast (real black background with very easy to read white letters).

-The sample part is enriched with a minimal envelope, very practical to use. Depending on the samples’ volume (which may vary), you can set their output level in dB, which is very practical when mixing two sounds.


Now, let’s go to where it hurts (but only very slightly)

1/ Still no wheel or pitch bend controls: Why? They’re quite practical when using plugs or the synth sounds from the Nord library. Also, why no real resonance filter (even if there’s a filter level control)?

2/ It’s also a pity that you don’t have 4 separate outputs to record split performances: you’ll have to record the parts separately in your DAW.

3/ The effects are shared and you have to choose from either Lo or Up, so no way to get two independent effects on two parts, which I consider a bit of a pity.

4/ You can’t play 2 different samples or 2 different piano sounds in the same time in “layer” mode, only a B3 and a bass pedal

However, you can play 1 piano or Nord sample sound shared in split mode, e.g. piano with a drive effect with the left hand and a phaser with the right hand. You can even cut the sustain of one part over the other, which is very practical to play a chord and let the sustain on a LO part for instance while letting the UP part playing a solo or bass – or the other way around.
Still, the split or layer capacities are limited.

5/ the reverb is common to both sounds, which is pity if you want the reverb on only one of them.

6/ Another thing I regret is the fact that when you change program among the 4 available in the “set list” menu, the sustain suddenly stops working

A real problem for live IMO, perhaps this is the device’s main fault compared with a Kronos, but the price range isn’t the same either.


In the end: as a whole, I’m seduced by this new version which really adds something, especially with the 1GB of piano sounds, the split/layer, the new, better-sounding effects, the screen and “set list” mode to prepare your shows, the church organ, the way the delay and reverb can now be used together or separate… I didn’t give it a full 5 stars however, as while it’s close to perfection it still lacks a few features...

Published on 01/22/15
Nord introduces at NAMM the 5th generation of its Electro digital synths. Audiofanzine visited the team for a special presentation…

View the 6 files about the Clavia Nord Electro 5D 61 »