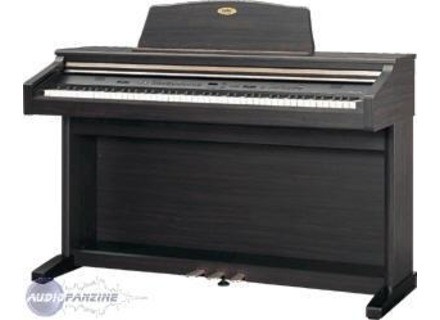 CA5, Digital Piano from Kawai in the Concert Artist series.

th0rgal's review (This content has been automatically translated from French)

Kawai CA5
5
I just rent one has to practice all the time (especially at night).

For specs, refer to manufacturers specifications:

My opinion on the functions rather standard, the recording function is useful. It may be accompanied. Possibility to mix different sounds, divide the keyboard into two parts (low tones and not lower) with two different sounds, etc.. In short, nice.

Keyboard: All right. Bcp care has been taken in the design of the keyboard: button wood, etc.. Possibility to change the resistance of the keys (conf user presets and curve resistance, your choice).

General Conf: simplicity itself. Buttons explicit connections easy. I just wish that the USB is behind, and not before as the Yamaha CLP 240.

Manuel: super clear (to me).

- Sounds: in my opinion, is the only point a little weak. Despite the presence of different sounds, I find that the midtones (~ middle of the keyboard) of the great pianos are a bit artificial. The low and high are OK.
The effect: not really play with them, I just buy it.
The expression is very good! But I am not a trained pianist, who has just self-taught on the job with various pianos, often of poor quality. I have an old grand piano at home, a Ritmueller a century ago, and there is no comparison, the difference is obvious as this good old Ritmueller needs a real REFURBISHMENT ... by comparison, the feel of the CA5 is very nice. on the other hand, my old one acoustic sound to which I am used to it. So very biased on this one it.

Operating time: 1 day
+ + +: General feel and ease of use, with a special mention for the keyboard
---: Midtones of grand pianos and USB at the back of the beast
I tried qq digital pianos: CLP230, CLP240, Kawai ES4, CN2 and CN4. What motivates me to CA5 is the keyboard with keys made of wood. For that price (~ the same as CLP240), I think it's worth it. On the other hand, the CLP240 had appeared as a better reproduction of the sound of the grand piano.
Repeat this choice? I do not know. Not enough experience ...
Did you find this review helpful?yesno
»

foguy_lucky's review (This content has been automatically translated from French)

Kawai CA5
5
In order to play the piano, he has what it takes.

Level connections, it has everything I needed, line out, MIDI ...

Touch is a huge asset for me. Touches of wood and Hammer, no spring ... no equivalent in other brands even more expensive despite several months of prospecting, note that I did not linger on the models to more than € 5000 anyway.
The manual is necessary to enter the settings a bit forced, and yet my usual textbooks are unnecessary.

Being an audiophile warned (concert and recital of classical, equipped with high-end stereo component-marantz_sacd_sa12s1 rega_mira-triangle_antal) I can say that the sound of grand piano is more realistic and good, at this level, the priority of a particular digital piano sound is a matter of taste, unless you type in digital pianos very high end (large touch or similar ..).
Of course the responsiveness / speed is just as good.

The resonance between the strings is very realistic too, just play two notes at a time or to use the pedal to realize it.

As for sounds, I only regret forgetting the xylophone much more fun than the "fourth electric piano" for example ... but it is secondary to me.

I use it for about 5-6months and I'm delighted every day, and I put about as much time to make up my mind for this purchase, so I had ample time to test everything that is (Korg, Yamaha Clavinova, Roland, Casio ...) and for me the choice was obvious, only the price was blocking me until I found a good opportunity.
The Yamaha sound too cold / metallic touch is not bad but worse than the CA5.
I did the korg'm not retarded .. casio for it is the entry-level models that are interesting.
The sound level rolland (latest models), I found them pretty good but the feel was fishing.

To learn and play the piano, it is ideal, Of course I would spend to say it's the best ...
At this price, you do not pay unnecessary gadget, only the good touch, great finish and sound more than adequate.
Did you find this review helpful?yesno
»

anonyme's review (This content has been automatically translated from French)

Kawai CA5
3
Piano keyboard with 88 keys made of wood and the most advanced mechanical all brands if I believe the descriptions I read.

We can register, not on 10 tracks, but more accurately as shown on tracks 2 to 5 times. These two tracks are recorded separately and mixable.

Touch is changed (light, heavy, etc.) but all other options not remembered. And so I started systematically on a light touch that I leave for beginners, as it should be repositioned every time I turn on the piano, and it's annoying. Same for the rest. Too bad that the manufacturers have still not understood that we would like to keep in mind once and for all the configuration that is being done.

One detail that really bothers me is the inability to quickly play the same note at high speed because the key does not have time to go back! Annoying to play the letter to Elise for example. As my very old Yamaha stand without problems.

The documentation is clear enough, it must be read anyway because everything is not intuitive but it does not pose a problem.

I bought this piano for the keyboard and its mechanical and here I was not disappointed. But the rest, if ... Piano sounds are average and a little dry. I think the special effects (reverb, etc.) uninteresting. Do not buy for expressiveness.

Other non-piano sounds are nice overall (vocal, very good third organ sound). Pre-recorded tracks are quite fun as they emerge from the obligation to know the score, leaving dependent rhythm and expression.

I use this piano for a couple of weeks and I must say that I am still not used to the simplicity of the piano (the main, because the others are less realistic but that I think it's all about pianos ). I dream of expressive sound of concert pianos.

Quality / price ratio honest I think, but I bought it at the end of a series is with strong promotion!

In order to remain impartial, I said that I had reached a very good piano but it was 20 years ago on an acoustic and than I really am given only a little over a year. On the other hand it is difficult to try all the models we would like because the sellers have very little stock. I still took the time to do all the shops in my town. Therefore probably difficult to judge the actual quality of the instrument. But if it again I think I turned to another model.

After more than three years of daily use, but normal, problems have arisen. Some sounds began to disturb a year ago or two? (Not rated but it's been a while). So if I use the mute after set some options, the sound starts to shake.
While I play certain passages, the sound moves from piano to bass without my touch anything.
The VAS is disappointing, a single point and not very motivated to provide answers.
Very angry on the pedal that yield. Explanation: The support bracket is plastic and not based on anything (only the middle pedal is based on a big screw when it is not often used), he ended up breaking. It seems absurd to put plastic plates, not metal on pianos that price in order to save penny-pinching. Replace this pedal will be expensive. I change brands for the next purchase.
Did you find this review helpful?yesno
»

dunamai's review (This content has been automatically translated from French)

Level connectivity was an entry in the CAR, an output jack and a MIDI input and output.

There are lots of sounds: pianos, electric pianos, strings, organs, pads and various other sounds a little space ... Sounds are not really editable but can be coupled with another sound, or apply effects (reverb, chorus, delay, tremolo)

To touch, it's really excellent! It is believed almost on a acoustic piano! Otherwise, access to the different sounds is fairly intuitive but it's not really the case for recording. Anyway you read the section on enrigstrement in the manual and hop! is known to use it. Speaking of the manual is very comprehensive and detailed and available in lots of languages! Moreover there is a large very useful section on MIDI which they explain all the basics and the principle of MIDI. Very useful for beginners (comments mine) that does nothing to MIDI pigeaient before.

In general, the sounds are pretty good. For me it was not a very important criterion for the purchase, knowing that I had a computer, a sound card, MIDI interface, I could very well have to mesh sounds.
Otherwise, the piano sounds are great and I are perfect for my use of the piano (I practice my songs, recording in midi or Line Out). on the other hand, as it was said in other opinions, for piano sounds, realism is very much in the bass and treble in the middle of the keyboard but it sounds a little artificial! Too bad because this is where we play the most.

I also like the sounds of violins, ambient, electric pianos ... Anyway, on average, like all the sounds!

I use it for almost 2 years and I'm really happy
The +: touch, appearance is also very elegant
the -: the middle of the keyboard that sounds a little artificial on the piano sounds, the weight too! It is really heavy so it is for stay at home! But good to have as good a touch requires good key so it's normal that it is heavy!

Before buying it, I tried a Yamaha in the same price range. As my main criterion was the touch, I'm not so focused on the sound after some hesitation I took the Kawai, which was a bit more expensive but had a better feel.

In my opinion the value is very good.

To be honest, I do not know if I remake that choice! That not the piano itself, which is great but my needs. I think I would choose a piano, albeit less aesthetic but more transportable, more to the scene. Such as the MP4 of the same brand, or the YAMAHA S90 ES.
Finally, if you need a piano made to stay in your apartment or home and you do not intend to carry this piano is for you!
Did you find this review helpful?yesno
»