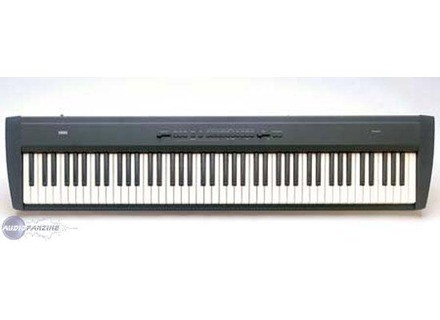 The Korg SP-200 has all the essential features of a quality digital stage piano, and is ideal for piano students who'd like to try some other sounds. Gigging musicians will find it a pleasure to play, but might find some of the features a bit limiting for stage performance.

The piano, electric piano, harpsichord, vibraphone, pipe organ, and clavinet sounds are excellent. Though not quite as grand-piano-like as those on Yamaha's P series stage pianos, the weighted keyboard is very fine indeed.

The control layout -- a row of buttons with LEDs, and just two sliders for volume and metronome tempo -- takes an excellent less-is-more approach, making the SP-200 easy to use for beginners.

Korg claims 60-note polyphony (simultaneous notes) for ther SP-200, but that's not always true. Some of the better sounds, like the first two stereo grand pianos, use two sets of oscillators and reduce polyphony to 30 notes, while the reverb and chorus reduce polyphony still further. If you layer two complex sounds and add effects, it's not hard to make notes cut off if you hold down the sustain pedal and play a few two-handed chords. On the other hand, if you use the lovely mono grand piano with no effects, it's nearly impossible to make that happen, so whether the polyphony limits are an issue depends on what you want to do.

The jazz/rock organ and synth string/choir sounds are merely adequate to good. There is no way to store custom user settings (for reverb, key-touch sensitivity, etc.), so when you turn the keyboard off and on, everything reverts to factory settings, which is why the SP-200 might not be best for those who primarily use it onstage.

The SP-200 can act as a MIDI controller or sound source, but neither is its forte -- it is designed to be plugged into some speakers, turned on, and played. Those seeking a weighted keyboard controller probably want other features, such as a pitch bend wheel, that the SP-200 lacks.

The case is about as small as it can be for a weighted, full-88-key stage piano, and at 40 pounds it is even relatively light. All the connector plugs are on the back, even for headphones, which is too bad, since a front-mounted phone jack would be more useful. There is only a single headphone jack, and no line-in to play along with CDs. The power adapter is a standard "wall wart" type with a small plug, rather than a more robust three-prong plug. The included damper pedal is just a footswitch, though a separate piano-style half-damper pedal is available.

For compact, high-quality, excellent sounding stage pianos in this price range, it's a tough competition between the SP-200 and comparable models such as Yamaha's P60 and P90, Kurzweil's SP88X, Roland's RD models, and a few from other manufacturers. The SP-200 acquits itself well, and can be a wise investment if you understand its few limitations in advance.

the simplicity of the key board, the weighted keys, and the compactness. like a mobile grand piano.

there is no midi thru and usb outputs and more over, some samples are sounding out of tonal quality at the extreme lower and higher octaves.

the design is extremely good, its totally rock solid, iron body. the quality depends on how you use it,, i have seen some other stage pianos where the keys are damaged due to rough handling.

it is good to go for this product if you have a good sound card and a computer and also a hi end tone generator like triton rack. as far as just performance matters this is the best option for a pro pianist.

Korg SP-200
4
For technical info, read the other reviews.
My only regret is that the sounds can't be edited.

For me, the keyboard is excellent.
I tested, among others, the Yamaha P140, whose keyboard felt too "heavy" even in light mode.
It's extremely easy to use and the manual is really helpful for certain settings that are a bit more complicated.
The response is perfect, it is exactly what I was looking for.
I haven't had the time to test midi.
Impeccable manual. That said, there aren't many settings to modify...

I was looking first and foremost for a good piano sound, and I'm really satisfied!
The sp200 offers no less than 12 pianos from classical to more "artificial" ones.
Personally, I prefer pure sounds with the metallic sound of the strings. One of the pianos is really satisfying.
The other ones are OK and the classical guitar is also pretty good.
The strings are rich but not realistic (too "stringy," in fact).
So it's not bad when it comes to sounds.
The excellent keyboard and response make it a real pleasant piano.

I got it 2 weeks ago.
I love its looks, weight (40 lbs) and ease of use. The effects, chorus and reverb, are awesome, as well as the setting of the keyboard.
I only regret that the sounds can't be modified and I don't like the sustain pedal at all, it's really cheap.
As I said before, I tested the yamaha p140 but I didn't like its keyboard.
I was ready to buy a secondhand roland RD500 that is very comprehensive and whose keyboard I like a lot.
I think the sp200 has a very similar keyboard (although I haven't played an rd500 in years, so maybe I'm not being too objective...).
As for the value for money, I found one for $700 online, shipping and handling included!!! I think I bought the last in stock. I got lucky...
I would certainly buy it again, especially at that price!!!
Even if you buy it for $800 in other stores it's a great deal, IMHO.
Did you find this review helpful?yesno
»

Korg SP-200
5
- 7octaves.
- 30 sounds in 10 banks, so you have 3 sounds available for each bank. Possibility to mix two sounds. 2 effects: Chorus and Reverb, 3 settings for each effect. Touch function for the keyboard. The piano sounds are obviously the most interesting (I like especially three of them), which is what made me decide to go for the SP-200, considering my budget and the other pianos I tested.
- Mono/stereo audio outputs PLUS headphones, midi IN/OUT, sustain pedal (not the best...)
Considering what I was looking for, and at this price point, it has the perfect features.

- The keyboard is very nice, but that's something very subjective. I learned to play piano on my own, so I'm not very technical (not at all, actually!). Up to now I'd had a "real" entry-level acoustic piano and have had the opportunity to play synths and other digital pianos (Yamaha P-80 / P-90, Roland RD-150). I have never liked the keyboards on synths, so I was looking for a weighted keyboard. After having tested the Roland FP-2 and 2 Casios at the same price point, I preferred the keyboard of the SP-200.
- The overall configuration is very intuitive. I miss a digital display and the possibility to configure sounds banks (to be able to switch quickly between sounds, which ought to be possible via MIDI, but I haven't tested it yet).
- I haven't tested midi, so I'll let you know my thoughts once I do.
- The manual seems very clear, but I have barely looked at it because it's very easy to use.

- I was looking for good piano sounds right from the start and that's what I found in the sp-200! I didn't think I'd be using the other sounds but have surprised myself playing electric pianos (including one with a very '60s sound) or mixing pads with piano sounds... I love it to play rock/pop-rock!!!

- In terms of realism, and compared to other pianos I tested, for me, this is the best one (below $1500).
- Good expressiveness. There's some sort of "damping" sometimes when you press the same note quickly, which is something I hadn't seen in a real piano. But I still need to confirm that it's not a problem of me not releasing the key enough, which reduces the velocity.
- I prefer the following sounds: Grand Piano 1, Bright Piano 2, Classic Piano, There's no single sound that I don't like, but it's true that I don't see myself using the Acoustic Guitar, for example. I would've liked a bass sound better.

- I've been using it for six days.
- There's nothing in particular that I like or dislike about this piano, I like it as a whole. I'm happy with my investment. I bought it new and think it will be my companion for years to come! What I regret a bit is the sustain pedal, which isn't worthy of this piano, and (something I think has been mentioned by other reviewers) the low level of the headphones output (very, very limited...). I plan to buy some active speakers to really profit from the sound of the piano.
- I didn't test too many products (3 Roland, 2 Casio, 2 Yamaha). My main reference was an acoustic piano, so I was looking for something that resembled it in terms of the keyboard feel and that, at the same time, had a good sound. The SP-200 was the best for me.
- I think it's an excellent value for money, compared to the other models I tested.
- After one week of use, I'm not ready to get rid of it! We'll see in a couple of months...
NB: Since I had no experience with digital pianos, I underestimated an element that has proved to be very important: A stand! I bought one for $40 online and as soon as I get a bit excited it starts rocking with me, in every sense of the word... It's all right for the time being, but I need to get a better stand in the future. Think about it when you buy a piano!!!
Update: I ended up making my own stand out of solid wood. I spent less than $50 and have a very solid stand that it took me a couple of hours to mount.
Did you find this review helpful?yesno
»
Read the 11 user reviews on the Korg SP-200 »