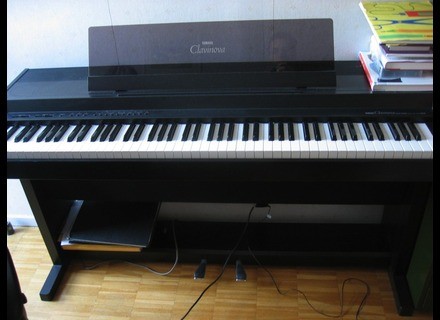 Yamaha Clavinova CLP-500
4
The keyboard has 88 keys standard. All controls are located on the left side of the instrument, two sliders define the overall volume and the effect of brightness, some little buttons provide access to preset timbres and effects.
The instrument is very heavy and imposing, I can not wear it alone, but that's nothing compared to a quarter of a tail. As with all Clavinova it is possible to work only with what Yamaha calls the plays and more prosaically auxiliary headsets. If your neighbors do not like your lines at 3 am, the headphone jack will be very useful. But it would be a shame not to take advantage of this amplification, which distills a good bass and treble equally treated.
It is possible to connect the Clavinova to a mixer through the audio outputs that are located behind the instrument.

It is very simple at the same time it is not a synthesizer to act on phonemes, envelopes or waveforms. It is still possible to do ten presets and 16 polyphonic notes. They are unfortunately not mixable with one another but the sound quality is amazing.
I find this keyboard with a touch quite natural, and finally relatively close to that of a grand piano. Thus allowing a comfortable playing. The answer is also quite interesting, you can go from pianissimo to fortissimo without difficulty.

I think the stamps are returned to a somewhat probing realism and evolve according to the dynamics of play the first two meets preset name Piano 1-2 are of excellent quality. The piano-2 is brighter than the piano-1. As for "Electric Piano" they remind me of the legendary Rhodes but not this small distortion Fender. In fact, they are wrong to be ... too perfect, and then in any case a Rhodes Rhodes is one that you want.
Attacks the harpsichord are great and realistic hope, for cons, the outfits are not blameless. Also as for the piano sounds, the timbre of the former is more matte than the second.
The "heavenly" in the middle of the keyboard is very close to the Glockenspiel (if you know), a favorite patch of Mike Oldfield.
The Vibes-1 is also very successful with a perfect vibrato, the vibraphone-2 does not benefit from this effect and its timbre is close to the Marimba, and again the attacks are very neat.
The guitar (classical) is very good (it's rare that sound is still often murdered), the one to do do do 4 to 5, it tends to become a Celtic harp, which allows to enjoy a sound further, but after 5 do, do not stress enough, the sound quickly becomes banal.
All these sounds presets can take when using a different color effects available, namely, tremolo together chorus, which unfortunately are not adjustable (no depth or frequency).

I played it and did my lines with my parents when I was a teenager. It allowed me to progress without the crazy (I was playing for hours). My parents gave me last July and it is certainly a beautiful gift. He did not join my other keyboards and pianos in our music room we call our "cocooning studio," but it is installed in the lounge. This allows me to work the lines to my husband, and even when he does not want to .. (but not). And also learn a few chords to my daughter this summer also has a passion for the piano, although she prefers the guitar. In short, all that to say that it is not only a good musical instrument, but also a great keyboard to learn and get started.