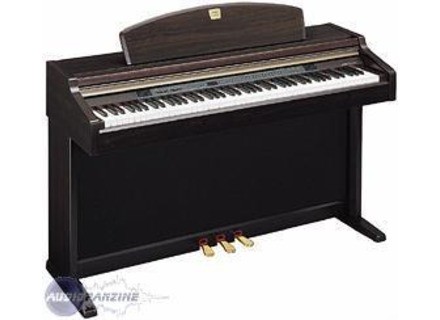 Jay Desaix's review (This content has been automatically translated from French)

And of course, two headphone jacks.

The sounds are really superb. The amps are powerful and perfectly reproduce the sounds of classical piano.

The term is excellent (at least comparable to a good upright piano).

Use since February 2002 and I have not found any real flaws in this Clavinova.

With experience, I do it again the same choice.
Did you find this review helpful?yesno
»

Koolloo's review (This content has been automatically translated from French)

Yamaha Clavinova CLP-950
5
- 7 octave keyboard, 88 keys, nothing revolutionary until then (or later by the way, if you want innovation, go your way xD)
the keyboard is splitable double-zone, with the possibility to assign a sound to the left and has his right side. based on transpose + / - 12 semitones

- Includes 12 sounds (Piano Gd 1, Gd Piano 2, Ep 1, Ep 2, Harpsichord, Vibraphone, Church Organ, Jazz Organ, Strings, Choirs, Wood Bass, Ebass) more or less réalistes.pour the effects section is are four different reverbs, delay, a phaser, a tremolo and chorus, the mix can be adjusted to each of them. Note that you can not use these effects at the same time, except for the reverb section which is REALLY a part and which can be coupled to one of four other effects.
The sounds are not editable, you can only add one effect to the set and then change the mix the effect with his choice (what is call&#39;d ca ... sound editing I&#39;m skeptical even xD qd). possibility of coupling two sounds except in the mode split (exple: Gd2 harpsichord or Gd1 + + eBass two winning combinations that please me well)

- More than enough connections for the use that I have to do: input jack x2/output x2, midi in / out / thru classical decision to host with selcteur position, 2 headphone jacks
There are three pedals, sustain and una corda course, and the middle pedal to the concept a little different: a few keystrokes of your choice on the keyboard by holding them and press the pedal-known, and without releasing the pedal release both keys. the sound of keys selected will sustain, while the nearby keys will not have and always maintain a condition of the pedal of course ... interest? I do not see this right away ... apart can be put to test the synchronization of gestures of the pianist must press the keys, then press a pedal, release the buttons, hold the pedal, play without releasing the pedal ... short, the engineers yam &#39;trip to have a coffee break anything). Because no mute master volume inside ... the magic of digital, I say more ...

- Touch is it seems the highlight of the keyboard, it has nothing to envy to the competition and approaches a touch of good quality upright piano. touch is adjustable to four templates selectable by a button: soft, medium, hard and no shade whatever the power of touch. It is suitable for my use, in the sense that learning the piano it provides a very realistic sensation (this keyboard was for me a working and learning above all, although today it is more a play intrument proper)

- The manual is very complete, in several languages, there are even more things than necessary, I had once used the manual to understand the history of functions to adjust settings, sometimes not very important to elsewhere (Saving settings before firing off the next, which is very useful in that it is sufficient to support up to three buttons on the desired sound for what is the matter of 2 seconds or adjusting the volume of the metronome in the overall mix ...)

- The general configuration could not be easier, everything is settled by pressing buttons for features summary ... In fact, it&#39;s simple and it works, ask more than that would be a mistake, because it is made for that and he does very well ... big advantage for this kind of keyboard where the primary interest is to "play" more than to take the lead with zinzin itself!

- I did not serve MIDI, I do not see the point for this type of machinery (except maybe marketing), or at least not for the fact that I use (learning and playing in groups ...) on the other hand I use frequently output to connect to sound or to register, and sometimes to make use of input and integrated speakers, but it&#39;s rare.

- The sounds are generally very good (I&#39;m talking about piano sounds of course, the sound you would expect from such a keyboard). I use these sounds for the most part I was never disappointed and I really insist, are very good, unlike some that are not really bad either, but just unusable to me: vibraphone that faithfully reproduces the ringing of glass that everyone loves that reminds those magical moments spent behind the sink to do dishes, wood bass to play Tarzan in a repeated zicos with friends, and totally psychedelic choruses under the grotesque caricature, to mimic the voice of Jane in response ...

- The reverbs are very good, for against the other effects are not editable (the delay of the delay damage for example ... It would have been a more significant). I am using no internal effect qd I play sound, I prefer to use my guitar pedal to the place that is a little more dedicated to this sort of thing ...

- The expression is just great for the piano sounds of course! it&#39;s like on an upright piano ... shades at will, really no problem there, it&#39;s just perfect

I use it since 1999, has been from the time I wanted a real keyboard in the flesh so to speak ... sick of these little casio workstation has 100 euros in the supermarket! (I caricature a bit ...)

-I like the sounds very realistic on the whole, remarkable touch compared to the competition, advanced connectivity always practical and useful, the general appearance (handsome, massive and it is not only an appearance ... ), its robustness because even after many transportation (to places together, yes I know it is not better to do, but lack of a better ...) it does not fall into disrepair but is even when not like the car of James Bond that he is still a few scratches, but it was inevitable xD
Well if not, I&#39;m sorry it does not include a mute function on my drummer: It would have been quite so soon as he had wanted to speak, the keyboard would have tied with tape over his mouth ... good fun but I had to find fault with respect to the functions
A detail that bothers me seriously: this keyboard is aging badly I think. 1/2/6/7 octaves of keys are in very good condition, while the keys are damaged 3/4/5 octaves. I mean they are no longer fully aligned and the touch is changed, less frank and sensitive ... FYI I have already changed the 3 keys, and a fourth going to the dogs right now ... knowing the price of plastic surgery to change a key, it starts to scare me a bit when it goes t stop it? my touch is involved can be sure, I tend to force a little, since I even managed to pull all the pedals yet sealed with 6 large screws ...
Another downside: too many sounds unworkable: already there are only 12 sounds, if more than half is not essential ... good but I have already said and repeat: the piano sound is by appointment and that was the objective

- I tried the roland, and I much preferred the feel of the Yamaha, it was for me the decisive factor. sounds are in turn more nearly comparable with the yam &#39;. in hindsight, I think I should have listened to the weight, too, is an argument that could just tip the balance in favor of Roland if you pardon the pun.

It value for money .... hum .... I found that these keyboards are a bit expensive all the same for what it is. It is 4 plywood boards covered with strips of fake rosewood, with a fairly simple compared to electronic synthesizers of the same price range (well not like it, I withdraw this argument, but even ... qd) , all made in indonesia of course.

- Yes I certainly do it again if that choice has to use it for the same use I&#39;ve done so far, which is not the case because today my needs and expectations have changed .. . I think I now turn to creatures such as ghost or the Nord Modular for group play, and then resell it, after making the necessary repairs (keys)
PS: sorry for the view a bit long qd but know that we love one does not count: Go a little 9 / 10 for this keyboard!
Did you find this review helpful?yesno
»