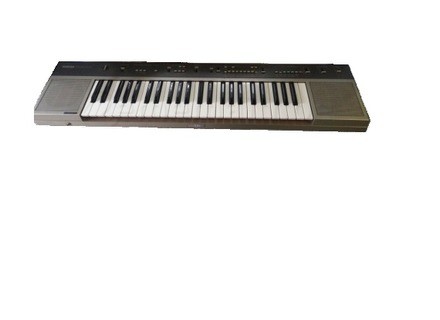 Mojoworker's review (This content has been automatically translated from French)" Unlikely"

Yamaha PS-35
3
The configuration is extremely simple, it is an instrument easy to understand with a handful of some rhythms sounds (but no metronome) and other features such as auto chord that plays a chord when you play only notes in the bass.
It is a 4-octave keyboard with integrated speakers, not noon, an output jack for headphones or possibly amplifier.
12 sounds sometimes do not correspond in any way to what they are supposed to imitate, it is also what gives it its charm.
Chorus and vibrato with integrated speed is not adjustable, the keyboard is not touch sensitive.

This instrument is definitely not for a beginner, the keys are not exactly the same size as on an acoustic piano so when you change from one to the other we lose a little. As stated above the keyboard is not responsive to touch and feel really bad. the manual is useless given the simplicity of the instrument, there is no MIDI sounds are not editable.
And the integrated console is unusable.

This is where it gets interesting, it produces sounds really unexpected.
For example, the piano sound does not look like a piano sound, and many sounds are a bit "8bit". In short sounds good crossed outside the organ sound a bit like following a organ. With sounds like "vibe" or "cosmic box" you start to get a little more attack and sounds rather interesting. To me this keyboard take any interest when plugged into an amp with some effects. organ becomes quite fun, and take a side harpsichord saturated enough funk and throughout the attack becomes more percussive notes and overall quality of sound is better (the integrated speakers sounds pretty bad).
One obtains a summary sounds pretty cool and fun by distorting or plugging some effects to bring out the side shifted sounds already present at the base.
I'll try to post samples quickly.

I use it for about 3 years, I bought it simply because I did not have much money, as I began, and that the knowledge thus possessed a purchase rather fortuitous.
Cons:
Touch, integrated speakers, the absence of noon.
most:
Weight, personality, chorus / tremolo.
Original keyboard that sounds good but it is a very cheap, although for other sounds in addition to a "real" digital piano or not, but avoid really for beginners.