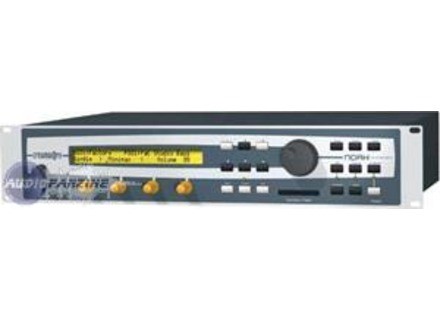 gratteman's review (This content has been automatically translated from French)

Creamware Noah EX
1
This synth crunches when changing presets, polyphony of voices are insufficient.
Do not buy I c resells the conned too.

arter
Did you find this review helpful?yesno
»

gratteman's review (This content has been automatically translated from French)

Creamware Noah EX
1
Highest guy did not seem to make a lot of scene or he works for creamware.

arter
Did you find this review helpful?yesno
»

In addition there are two "big effects" using one multitimbral parts: the Vocodizer a vocoder in mind EMS and Interpol, the Minimax filter for external signals.

All this is mixed via the mixer that offers a Chorus, Delay and Reverb and two insert effects to choose from a collection of over 30 effects and assign them to one of the 6 channels (4 parts, analog input or stereo audio input USB) or mix.

In reinforcement of instruments, each party has its multitimbral stepsequencer 16 step or arpeggiator. The parties are assignable to different MIDI channels but it is also possible to do splits / layers.

Any editing can be done directly on the rack via the screen 2 lines of 40 characters and 4 encoders that provides access to four settings page (useful for precise mod), if we have a PC editor windows XP. Personally, I prepared templates on BCR 2000 that allow me to remotely editing almost all plugs. The PC editor I use to prepare multis, then I refine using the BCR as a remote ...

Connectivity, it has inputs / outputs and analog stereo ADAT port allows out each of the 4 individual instruments in stereo and digital. You can also find this on the Mix analog stereo output on the USB Audio.

Given the versatility of the machine, the configuration takes a little learning but is quite logical.

The sound editing via the integrated display, the PC software or a MIDI controller is pretty easy.

Manual, done well, is very complete and available in French.

Sound side, there are the qualities of the plug-ins CreamWare Scope.

The "emulations" allow access to machines with its mythical model approach that probably. And offers a polyphony that goes well beyond the machinery which it is based.

Personally, the best that I have found in VA, "hotter" than others or VA I got (Virus, Nord Lead, Novation KS Hardware, Arturia VSTi or). A sound that I much prefer to everything I&#39;ve tried others. A taste of what will be the Creamware ASB (limited to a single plug and monotimbral but a control surface modeled on the Minimoog, Prophet 5, ARP Odyssey which allows to find the one button = one function).

I use a little all plugs with a preference for Prodyssey, Pro-One, Six-strings (especially to do things different guitars it is supposed to model - it is the synthesis, no samples ) and Vectron (also available in Beta but unfinished - functional, but is not accessible via MIDI CC). The vocoder is also a plus.

Purchased in 2006 for a price well below the more than 2000 € Tariff (probably the last new model sold off at the time of the first bankruptcy CreamWare).

Then I tasted the Scope DSP cards, more flexible but requires a PC before switching last year on the solution of the last generation that is SonicCore Xite-1 (a studio in a 1U rack with roughly 5 to 10 times more than the resource NOAH Ex).

There are 2 models launched in 2003:
- Noah limited which has roughly half of polyphony and is limited to two parties and was marketed around 1225 €.
- Noah Ex I bought was at its launch in 1550 €.

I missed the last but I had the chance to acquire a B-Stock for less than € 700.

The value was already very good initial costs but high ticket and versatility could be confusing compared to a VA "classic". But I could not prevent myself to buy a second-hand in 2010 when I had the chance.

Too bad that the first bankruptcy CreamWare is put a halt to the development of NOAH, there were still other plugs Scope to bear on the NOAH (Modular or whose finalize the Vectron oscillator integrating Waldorf) .

Since there was also the 2007 Plugiator Use Audio on the initiative of the founder of CreamWare fire, which provides access to a collection of plug Scope from 8 Monophonic but still. Noah Ex a light capable of providing almost the same as its predecessor polyphony at the cost of publishing on PC mandatory and disappearance of certain assets of Noah Ex (multitimbral plugs with several different arpeggiator stepsequencer, provided greater effects including reverb, complete edition possible without PC).

But the adventure continued in another form and gave the Solaris under the leadership of John Bowen ...

Gustav's review (This content has been automatically translated from French)

Creamware Noah EX
5
Expander rack usb - midi in / out - with adat power dsp!
I got to buy:
synthesis: the pro-one, the B2003, the minimax, the sixstring the lightwave
effects: Interpol, vocodizer, knew the mixer: reverb chorus delay and a host of other more specific
all is editable at the rack or via USB interface on the PC or Mac

Flexible to use with four compartments that can juggle DSP power available
handling the rack via 4 buttons or via software: visually graphic modules full of possibilities

The former includes modules noah excellent sound quality (difficult or impossible to get any better
I recorded songs with qq: http://hurpasard.free.fr - you feel even

Honestly - I do not know who posted the notice negative precedent but I think it's anything
Noah is certainly expensive, but it is a powerful tool that manages with excellence polyphony etc.
do not hesitate to contact me if you have any questions about this product!

Did you find this review helpful?yesno
»
Read the 8 user reviews on the Creamware Noah EX »