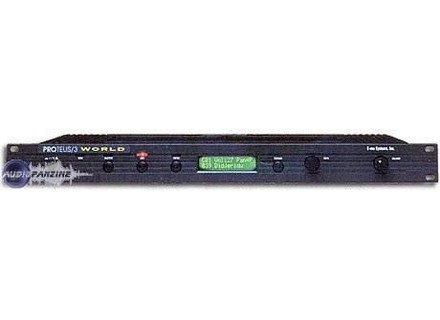 nikko666's review (This content has been automatically translated from French)

E-MU Proteus 3 World
4
Apparently many people ask an opinion on the Proteus, I decided to give you my impression.
I had all the proteus. So the Proteus 3 XL is actually a Proteus 1 XL but with different sounds. Moreover, all were sold proteus with the same manual, that of Proteus 1XL.
So even carractéristiques:
32-voice polyphony.
16 part multitimbral
392 programs
6 separate outputs
40 parameters in its

Basically, it's a rack that is made for that we use the sounds and voila ... There are many, quality and have on hand is very convenient.
But the Proteus 3 to the engine under the hood of EMU with good filters and a whole arsenal of analog synth (ADSR, LFO, VCA ...) and the flanger and chorus of other EMU EMAX 3.
For against the edition, with four buttons is not obvious.
The manual is very clear and relatively thick, it will be useful for those who want to create own sounds.

EMU sounds are generally more PRO than the Roland sounds. The Proteus 3 was not too much before, and have kits, and sounds of the entire amount is more that can bring a lot to any style of music.
The proteus WORLD has a range of sounds impressive, bagpipes to Indian flute, percussion kits legendary stereo (Tablas, Congas, Latin percussions etc ...)
Also many exotic instruments Indians, Africans, and French (yes for Americans is the accordion Emu 'World'). Drum kit and country harmonica are also planned.

The Proteus 3 to a value for money very good. The price of opportunity in 2005 is approximately 150 EUR, which is a good price considering the quality of sound.