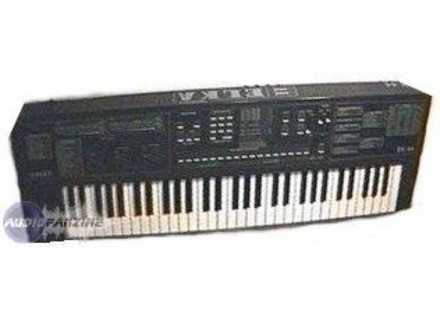 All user reviews for the Elka EK-44

rititi's review (This content has been automatically translated from French)

The use of the menus are clear and well structured.
I had a DX21 before, editing is native! lacking a publisher via a PC or MAC tool.
The manual I have ever had, for there against an online help on the display.

The sheets are beautiful, the piano is not the entire operation of the technology of the keyboard they are limited to two octaves!
The control is very nice and accurate cons (Velocity and Afertouch very well.

I have this keyboard for 15 years, he is my companion composition.
Apart from a note that "COAC" The A2 is very robust.
I use mainly keyboard master and multisplit assignable Midi came in handy.
Very good dynamic and touch after touch, it lacks a touch heavy.
After 15 years, I do not regret my purchase.

Valken's review (This content has been automatically translated from French)

Elka EK-44
4
It has a 5 octave keyboard CC
It has a controller with a pitch controller integrated modules (one push =
Three connectors noon in thru-out.
Its two outputs, left and right.
A headphone output.
4 controllers Jack ...
- Portamento
- Advanced Perf Reg (Ca I have seen and I'd like to know what that is)
- Sustain
- Volume

A port for cartridges.

I did not find any documentation or utility for exclusive Systmes ds but I ca I made an editor.

The manual What is a?
Well, the keyboard there is a reminder of how it works, it works like that FM technology.
I will not go up to say that the edition is easy or as intuitive as the HS 2000, but with a PERIOD learning how we get so many sounds.
But it is certain that it's easier to edit a sound on the D-110, despite the 8 osciliateurs per track (2 total)

Cot configuration, well there stuff is a bit Nerva, but it's not complicated.

Sounds, well, there are no tops. Well, not the original ones, except the Tubular Bell makes her great.
I guess he does the music used in the blue.
The effects are nice but there is not a ton either, the only consistent with the status effect is the chorus.

The piano is horrible.
The sound of a trumpet which is not provided with recess is super nice.
Nampers is a home made one is nice too.

Clearly, a synth with pretty sound condition but to hack.

It must be ten years since I have this synth and I use it more as a keyboard matre than anything else.
The touch keyboard is great and that's a beautiful particularity of Elkas, they always managed to give the penalty for keyboard. Too bad this synth dnature with the brand, they had us habitus much better.
I do not like is that of a sagit synthtiseur FM and me I like the good old vintage or modern stuff then.
I was top up this keyboard because it annoy people so it does not really a choice, but it is well made.

With exprience, and especially money, I would take a Synthex.