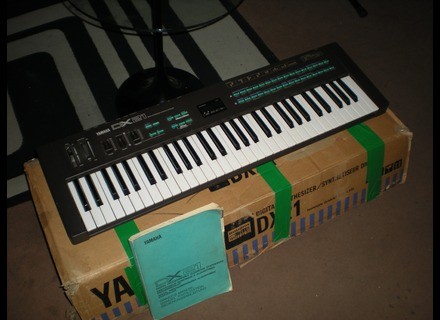 DX21, Digital Synth from Yamaha in the DX series.

pk.grs's review (This content has been automatically translated from French)" Old, but still nice"

Yamaha DX21
4
Of course, evaluating this synth in 2012 may smile, but prevents it still works perfectly, although more than 25 years of loyal service!

I had preferred at the time, compared to the DX7 because it had the function of dual or split, although its keyboard is not dynamic.

It has MIDI connections, making it still interesting today, coupled with a "simple" keypad (I have a CP33) for the sound bank (programmable dynamic!)

Just needed to replace the internal battery for backup of personal sounds (after 20 years!)

Very simple and intuitive.
Programming sounds is still a bit complex and requires some learning to successfully integrate the principle of the algorithm.

Very satisfied at the time, I kept for 25 years!

I gave at the time the "sirens" of DX, after long hesitation ... He absolutely had to have the "grain" DX and never go to a hippie ringuard! Lacking the financial means to buy a DX7, I rabatu on DX21. Partly because he had two generators with separate outputs (but less than the DX7 algorithms). I thought that spending time in programming, I was going to get something
Time, I spent, believe me, for hours and hours of concentrated effort to try to make it sound. Yes, but here, one is a DX DX. I know that these instruments are still strong advocates, which I certainly respect the opinion, but in my case, on arrival, there is one word that characterizes their sound to my ears overall, and particularly the DX21 (the poor relation, it is true!): "plastic" ...
When I re-listen all I was able to record with, including the studio, I feel like crying, so it seems to deal with a toy. Say that I almost take the place of a Korg DW6000 at the same price (a synth of the same period, with digital oscilloscope, but much more loving and caring, and with a real analog filter)! Almost 30 years later I still regret that choice, that says it all ...

Go, go, I do not really hate you Pet, we still spent a lot of flying together, even if you're not by my side ...

9 of 13 people found this review helpful

Sounds unrealistic own fm has slipped into a mix but not the presence there of the possibility Etrema forward
I use it with guitar pedals and it pulls nicely out of the game ...
I hate the sound effects and imitations all possible (a base) but with an FM is worse then any realism = 0 points but it's not his goal lead and bass fx are specially its

I like it because it is quiet and clean with a character .... But it's really not the best machine fm from Yamaha but I like qqchose

in any case to purchase only with a reasonable price and consequently set .....

nibla's review (This content has been automatically translated from French)

Yamaha DX21
4
Cheap and tacky keyboard FM (marron!) of 1984 with 128 presets and of course the possibility CRER own sounds.

So easy when it comes to import sounds from internal bank, a little harder when it comes to programming, the FM synthse of Yamaha DX is not intuitive, but we MRIT it tries, it is an exercise INTERESTED ...

I n'tonnerai certainly not many people by saying that the sounds of this keyboard are super 80's, but what is thundering trs is that when you dig a little, there are sound REALLY terrible in all areas!
Personally I like the Rhodes sounds that are not so ridiculous, and I even found a couple of organ sounds for use. The top is the sound-effects spciaux type (eg Doppler effect is gnial!) And the bells and other sounds mtalliques or machine excels, of course if you dig a little. ..

I do not use it for a long time, but I rather gnreusement note, because for a ridiculous price (90 euros for mine ...) you can have a machine with weird sounds used in lots of situations, for we love the little hack, for example, with pedals of cradingues scratches or other ...
the overall score of 8 bit sound fMeasure but a note qualitprix

Did you find this review helpful?yesno
»
Read the 8 user reviews on the Yamaha DX21 »

Yamaha DX21 manuals and other files