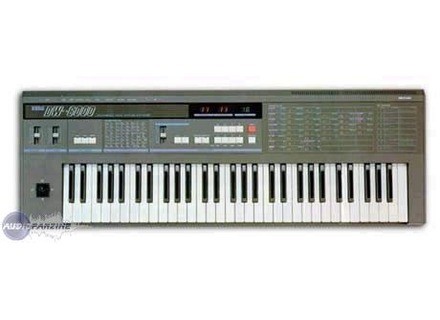 Same as dw8000 function is selected by a button and enter the value in data ... the book of record is clear but concise

particularity the filter self-oscillation whistles and more ..... his sinus problem (which is also a quality for certain) is the diffrence levels during the action of the filter ... ... so large compressor required filter sweep
volume falls as a increases as the resonnace

but a real analog filter that gives it its charm

attention to the pots and buttons that do not age well ....

Korg Dw-6000
4
The Korg DW 6000 is often presented as the big brother of poly-800, but apart from the look, he finally little in common. It is a Polyphonic Synthesizer 6 voice hybrid, using an original technology: the waveforms are not the sawtooth, square or triangle normal, but complex waveforms generated by calculating, for a harmonic content richer. The envelope generators (one for the oscilloscope, a filter and another for the noise generator) are managed digitally, and are 6points ADBSSR)
The filter, however it is analog and is quite consistent with what we expect from a Korg little of the time: it is very good, and that's good because otherwise the oscilloscope are somewhat maigrelés. but to give some volume to all this there is a small chorus.
However we may regret that the DW 6000 is not richly endowed side modulation, a single LFO, providing only a sine wave must address the oscilloscope and the filter. No poly-mod and routing of madness in order: it will remain classic.

Finally, it has 64 memories to keep his findings, and contrary to appearances, there is no preset and can crush everything. The instrument is noon, and seems, can transmit the sysex ...

The interface is at the heart of the 80 interface with a calculator, but it is very easy to handle and it has a knob for liénaire changment value.
In addition, the instrument is made of plastic but enjoys a good finish, and the keyboard 61 keys is pleasant enough although it is not sensitive (at least I got one in mint condition)

The DW 6000 is very typical pop 80 'but it gets more easily lead 70', with its strong unison mode which brings together six votes to one. The portamento will add the touch funky. The organ sounds are comvainquant, but his favorite is that of dommaine sonoritées further and air of deep aquifers. It does well in low because it has a good filter, which sounds great: it has what it takes to decide, but without excessive stiffness. Finally those who seek the sound of '80s pop will find happiness here. But let's say it again, it is very different from the Poly-800 since it does not share much with it. The amazing thing is that it is very powerful, but at the cost of polyphony and a smaller keyboard.

This synth is very easy to find on the market, but has the advantage of being very accessible price. It can be purchased for an introduction to the synthesis at lower prices, or to complete a set, or just ... becaufe like it. I've come across, and as it is in new condition, it gives me any satisfaction, along with four other synths in the same péroide.

Korg Dw-6000 manuals and other files