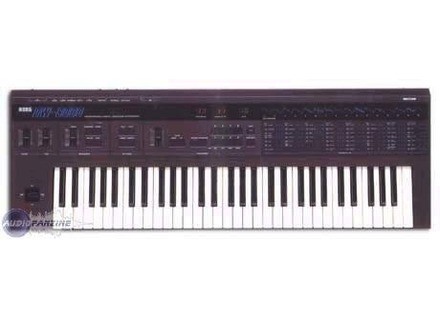 Korg Dw-8000
4
I got it from an online store 5 years ago. It was always my dream keyboard because of its amazing sounds. I paid 500 pounds.

It's an analog-digital hybrid; there are 16 samples instead of oscillators, but the rest (LFO, Amp, Filter, etc.) is analog. The sound is amazing and when you switch from poly mode (8 sounds) to unison mode, all 8 oscillators start when a key is pressed. Very fat, excellent for leads. Instead of a pitch wheel it has a 4-direction joystick, where left-right is a pitch bend, up is an LFO boost and down is an Amp boost.

The organ sound kinda sucks. Also, the joystick tends to fall apart. Some of the function buttons tend to fail sometimes.

Generally a very good keyboard, mainly useful for synth sounds (leads, pads). I use it for progressive rock, but it can also be used for techno and stuff.
Oh, it was manufactured in 1984...

Korg Dw-8000
4
The DW-8000 made its appearance in 1985, along with its little brother the DW-6000. Both synthesizers are based on a rather original architecture, unusual at the time, they are hybrids, as indeed the American Ensoniq ESQ-1. If the filter, envelopes and LFOs are analog oscillators themselves are digital. Where ESQ-1 uses sampled waveforms, Korg has chosen a slightly more complex technique, called Digital Waveform Generator System (DWGS). It is not quite samples, but samples calculated waveform produced by additive synthesis (you follow?) The result is a particular sound quite clean to the family of DW, and remained unprecedented since.

There or DW-6000 features eight waveforms calculated, the 8000 double bet, and offers ADDITION traditional forms of analog synths. Caution, however, is not found so far all waveforms on 6000 8000.

Among the forms available on the DW-8000, there was a predominance of such wave forms enough to render metal or copper. It is clear there will Korg fetch the Yamaha DX7 on his supposed stomping ground.
Note: a recurring fault on Korg this time, there is no modulation or possible synchronization between the oscillators.

8000 DW is one of the last avatars Korg before the acquisition by Yamaha in 1987, and thus is distinguished by its high quality analog filter, which made the reputation of the brand. However, this filter is based on a fairly standard CEM circuit, but in fact sounds particularly good! Please note: the resonance achieved self-oscillation, and "keyboard squaling" function offers a four-point scale against three for 6000.

Moreover, there or DW-6000 contains every feature LFO Poly-800, 8000 brings welcome changes: there are four waveforms instead of two, but no sample / hold, and c is a shame.

Small feature of the DW-8000 compared to 6000: portamento addition, there is a "self-bend" configurable: it is introducing a glissando in the attack of each note. Again, we feel the desire to align with the DX7, which offers him squarely a dedicated envelope generator pitch.

The DW-8000 is eight polyphonic voices, instead of six for 6000, and provides two polyphonic modes, and two powerful unison mode, a different influence on the triggering of the envelopes to the attack of the notes.

Finally, conclude with what clearly distinguishes 8000 6000: first are digital delay, which also serves as chorus plus offers a very useful digital LFO to assist the main circuit. However, the value of delay time is not gradual as the Poly II-800, but offers only seven values. Suddenly, it misses the great flanging effects of Poly-800 II. Shame ...

Then, of course, arpeggiator, with its latch function, which transforms it into small sequencer. It is in line with the Polysix and Poly 61, but was well ... If the Up / down mode, the Up and Down Mode is replaced by an Assign mode still groovy least in some cases. It is a shame to have removed these two modes.

Novelty, the joystick control on the 8000 live opening the filter, as in Roland.

Finally, finish with the keyboard, different from that of 6000: there he is sensitive to the touch, and offers after touch. For those familiar with the Korg M1, well ... it&#39;s not the same keyboard as the M1 manual mechanics there DX7 or DW-8000 uses a special keyboard, which amortization is less pleasant.

In the end, even if there was some flats, the DW-8000 proved to be fairly complete in 1985, and today, it complies well enough fans synthesis.

The only real fault DW-8000 is to belong to the generation "calculator", and not to propose knobs facades, as major U.S. synthesizers where some Japanese legend. But here the controls are really intuitive, well thought out, with the summary of all front panel functions, all presented with more elegance on the DW-6000.

It is clear, it is clear, and an amateur synthesis can do without instructions. One in English, also not reveal any major secret, and who is fluent in English, it is very didactic. We do not take the head as the reading of the DX7, far more complex and complete synthesizer it is true.

In addition, the DW-8000 can address a beginner, to be a good school.

Let&#39;s be clear: the DW-8000 is a pure electronic instrument to make electronic music, do research, and nothing else. It&#39;s not in his personality to go imitate an acoustic instrument. This is not a Workstation-fed PCM and other General Midi sounds, this is a real synthesizer. And in his field, he has a personality, it shall be clean, and it should not be confused with one another. For those who love the Korg very typical of the 80s, the filter is to delight the ears.

Oscillators, they do not sound at all "American" as the SSM and the Polysix Poly 61, and do not sound like either of Poly-800, even if you feel that all these people belong to the same family.

Amazing fact: if it was reported that it is not found on the DW-8000 all waveforms 6000, when they are common, well ... they sound different! Is this due to the D / A converters? it is certain that the sound of 8000 seems heavier than the 6000. Suddenly, the DW-6000 is capable in some cases of a delicacy in harmonics, a more ethereal side not found on big brother, but it is more round and copper. Somehow, it is closer to the sound of a Poly-800 at times, while maintaining the specificity of its inimitable stamp specific to its hybrid nature.

In short, 8000 is not 6000 and vice versa. We like the DW-8000 for its low short, impeccable for sequences and arpeggios, its progressive sound with a high quality filter, its, special effects these powerful brass. Its digital delay also brings a very distinctive and attractive color.

Clearly, the DW-8000 is both very Korg, but not equivalent. if you are attracted by the instruments with a strong personality and know how to make part of it will find its place in your set, and projects of electronic music.

I have for many years, Korg, which just a DW-6000. I am equipped with the 8000 for what it brings more thinking have to do a synthesis part absolutely comparable. If this is the case on paper, listening, however, the two brothers are distinguished clearly enough ... and I will definitely keep both!

It is also clear that the DW 8000 does not affect the power of synthesis of some tenors of the time, as the DX7, Oberheim Matrix or otherwise more expensive, it is not comparable to the another hybrid of the time, ESQ-1, very typical U.S. and more complete.

However, the DW-8000 is not a toy, and remains effective for its time. And most importantly, there is the sound, his personality, his trademark inimitable. With its own personality, it is capable of varied sounds, and offers with ease exploration.

The DW-8000 is therefore aimed at enthusiasts synthesis, those who like real synths. So those have interest to go find out, often for a small fee, but beware, the rating goes up.

30 of 30 people found this review helpful

The config is simple (if you know what a real synth), no menu, a setting, it goes directly to the value by the number keypad. We need the manual just to clarify obscure points 2-3 (found on the internet), for beginners they introduced the basics of the synth.
The program is very simple there are not many parameter and they already can reach a large variety of sound.

The sound is that you made, so if you find bad .. ben is that you are wrong!
The bass is so powerful you can really fzire large sounds, to the point that after it is difficult to board on a Yamaha PSR you feel is missing half of his alone, mostly on organ type sounds.
Now the beast has limitations related to its generation, especially in the attack: the sounds hyper modern dynamic forget,.
Sounds kind organ, electric piano, brass, chorus, violin, synth delusions are his thing, but if not look for realism, realistic sounds forget.
If you feel your limitations Fill in the current price (in 250) and the release date (1985).
Oh I forgot the keyboard is good, the sturdy, well designed with buttons, for it is semi weighted against trend, very good for muscle fingers but not much.
This is the blade contacts, so a small cleaning the bomb contact can be necessary.

Zebra trois's review (This content has been automatically translated from French)

This is the same simplicity! PSE and I my words!

As for sounds, the original ones are not extraordinary. It's a synth that requires a little research, to have a rsultat INTERESTED. It blows a bit, but ...

As some of the era synths, the DW8000 is a synth numrique (waveforms) and an analog filter (VCF, VCA)! Aprpgaiteur and more! For the price second hand, ... Why do without is a synth plutt complter for a set.

Did you find this review helpful?yesno
»
Read the 7 user reviews on the Korg Dw-8000 »

Korg Dw-8000 manuals and other files