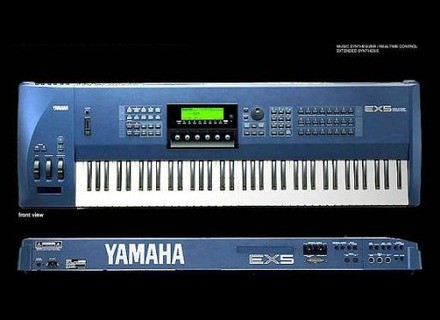 All user reviews for the Yamaha EX5

Average Score:4.2( 4.2/5 based on 7 reviews )
Not satisfied with those reviews?
Our members also liked:

Yamaha EX5
4
A whole world of synthesis (EX: expanded synthesis) lot of techniques to make sounds, but not very friendly to integrate as one. Sampling is very cool with the EX5, but the memory capabilities are very limited. you can reverse sounds without accessing editing screens, and make 1024 waves from the samples you have recorded. The sequencer is the worst feature of EX5. It has 16 tracks, but you can assign effects only with three of them. If you jump from one track to another one, there is an annoying interference on the sequencer playing. If you use an analog sound, you can't assign effects to the other 15 sounds. The arpeggio secuencer is really cool, but complicated also, and with some innecessary feaures. You have a four track secuencer for making 50 user arpeggios, an 8 track secuencer for 50 user patterns. and a song mode for lineal recordings. But only 30.000 notes capability for all these features???? Who understands Yamaha enginneers??????

Well, the EX5 is one of the most complicated synths to navigate. The user interface is really annoying, you get lost in a huge mess of directories and subdirectories. They try to put too much features in just one machine, a terrible waste. Yamaha put a lot of their synthesis knowledge in this synth. The result is a keyboard with too much software, an infinite path to create original pads, with a really confusing hardware to operate it. the sequencer is a waste. It has 30.000 notes capabilities.

The EX5 has FM, AWM, FDSP, virtual, sampling and analogic synthesis. Something else? The quality of the sounds is really good. The virtual sounds rocks, you can improve thwm with a brath controller, and the FDSP effects are very original, it has very realistic effects, for example, for playin' an acoustic guitar. If you combine the different ways to edit sounds in just one, the EX5 can make incredible sounds. For example, you can layer a sample wave, a FM voice, and a virtual voice, and make an original pad with these features, and resample this pad. EX5 synthesis is really original, an odditie for pads creation. The coolest feature of EX5 is its capability to make new sounds from the combination of all the Yamaha's different synthesis into a unique instrument.

No customer support for this keyboard. I can't even find accesories, supplies, memories, etc. how much EX5 or EX7 users around the world? 600, 700???? This keyboard is the factory prototype for the Motif. Motif is the improved version of EX5.

I like EX5 because just a few people has it. It's a freak, and a failure from Yamaha sound engineers, who tried to make &quot;the new DX7&quot; for the ninetiees. you have to take your time to learn how to operate it. But it's an incredible machine for sound editing. Combining the different synthesis like FM, Analog, FDSP, virtual and AWM into just one single pad is possible. I use it for editing weird sounds. Its very handy for me when I want to create sounds with my personal signature.

Yamaha EX5
5
76 weighted, very nice to play keyboard keys, I have a ts12 and AN1x and ex5 and much higher.
Many assignable time, which also helps for the edit control.
The synth itself and beautiful, it is very solid and quality, but also very heavy I carry every week, eh Ben c is sport.

The strong point c is really the very fast access to all parameters for sound editing, have enable or disable the elements that will constitute the final sound very quickly.
The general configuration is thought, the comprehensive manual.

The sounds are beautiful but only if the create because of factory sounds are quite uneven, has also found much on the net.
Strong point are the synth bass, sound sequences, tablecloths ....
Brass can also be very realistic with the synthesis vl
Ex5 its grain apart, c is of the high level synthesis.
Only the drum kits are not terrible, and the piano sounds that are far from being the best.
The effects are very comprehensive, principally made with fdsp synthesis can make sounds unusual

I bought the new in 1998, always impeccable just the battery that I have changed to paid time 15990fr
I m still using a lot even with all the vst that I have because it is the grain I used in all the pieces I made.

Laurent0300's review (This content has been automatically translated from French)

Yamaha EX5
I bought it new, all options at its output ..... and frankly, I do not regret it at all because it is an excellent workstation.
I do not know enough about the series "Reason" to really compare, but from the few docs I've read above, it seems that the "improvements" are mainly located at the ram which is relatively low EX5.

I find excellent ergonomics and the only difficulty could (possibly) be due to the large number of adjustable parameters added to different types of syntheses.
Well ... it should not be too stuffy anyway, it helps!
For my part, I spend a lot of time on my synths and fifteen years later, the EX5 is always a pleasure.
Some complained at its output a MIDI latency problem when using multi-timbral. A particular set of EPROMs corrects this problem.

The low power DSP limits the use of multi-synthesis therefore, actually ... always depends on what you want to do!
Synthesis VL is excellent for strings where brass, it is only when associated with the synthesis AWM2 (16 bit/44, 100 kHz).
The AWM2 is reading and editing samples, the principle of which all sampler!
AWM2 in the synthesis is very extensive and the possibilities are enormous.
The AN is nice here but not worth a good analog.
Synthesis FSDP is a set of effects applicable to voice where AN AWM2. The result "may" be very original here depends on you.

The possibilities of expression are tip-top, it's simple ... everything is customizable!

I had bought it new when it came out and then live his competitor was the Korg Triton.
I did not hesitate a second and even today, I do not regret it.

For my part, I have other machines more, but in almost all compositions mas there at least one of the EX5.
The presets do not interest me on a synth and I love creating my own sounds.

If you want to buy a OCCAZ go ahead but I would advise you to find a fitted options because then it will be mission impossible to find.

VERY GOOD MANUAL. I got it in French. a little "thick" as many references on other pages but overall well done;
a config simple enough but you still even get their hands dirty!
edition sounds good bill, I also grounds are but some of the sounds are well worth the former motive;
flat: split mode I have not managed to put more than 2 lanes??? still no solution;
effects sontde good quality and do not require always a lexicon input type or another, many audio outputs allow a lot of patterns

very good machine and still has many years ahead of her despite recent models, in terms of sound, have not made real improvements; many gadgets but too few innovations;
for proof: OCCASES are rare!!

mark.darvers's review (This content has been automatically translated from French)" the reference number for the happy posssseurs"

I use it since its release !! equipped analog and SCSI cards !!! I never in sparerai !!! wise !!! this synth will indmodable ...

Davedoudou's review (This content has been automatically translated from French)

Yamaha EX5
5
Same as above

The config is a mathesis universalis: c of a paradigm in its time, a technological species to synthtiseur!
Fast Fashion The sound is complex, a basic knowledge of both analog modlisation Year at the level acoustic / physical VL with sound combinations of AWM2, couples or not, including the selected algorithms offer sound reproduction still virtual fab. The edition is fairly simple for a novice, for example.
The effects are good trs.
I emphasize that this is a synth sound of Fast Fashion more than a workstation! Synth rich o one can extract textures grazed, fat, round, or vice versa, endless ... And that can mimic a lot of sources such as simulating the synths of yesteryear from the best-known brands, American or Japanese ... 70/80!
The manual is a little "catch-all" less likely explanations clear and distinct that help: a jumble sometimes insufficient as it passes most of ct, much information in a sluggish translation for so little about the use of clear!

All sound sources are authentic and less like what we hear today: that synthtiseur possde primarily a singular grain, a crude state of treatment, by which we can adapt any course Fast Fashion of Sound, a music game whatsoever.
Groundwater is he, as opposed to gnrations postrieures dpourvues since they are constantly reworked as hobbies Stril the game, what is not found in longer Yam today!
The EX5 is not a gas plant: it is just dlicat, effects such as provide the monstrous FDSP, limiting treatment, including treatment of c limits the effect supplmentaire : Synthse overkill but dvor all!

The term is itself sensitive trs: VLOC impressive.

The Sampling type of A3000, yep, blah ... No need for this type of instrument that focused more on the solidity of its synthses that this tool is not exhaustive.

All sound (1 trs BIG BMOL: some piano sounds are catastrophic!) A Z (sf also for drum kits that can be amliors with a little modification sound) is EX-CEL-LENT!

But what happened to this synth moves away from the workstation, so that it dsintresse much?

I tried some synths in the same era, especially before and also during, and then today, of all latest generation which are sometimes large PRFA 'clone s, but not an own signature sound! And this finitude is progressing from year to year with these entities increasingly labores whose fallacy musical identity no longer has any sound, unless it is an instrument that possde Difference them as the EX5 and many others, the nature of sound, identifiable, has its own characters!

I consider this a synthtiseur intrt paradigmatic (use + 9 years) who served as an example for other future forcment synths but not with the original color, or even with original architecture of the late 90's, which nanmoins food sublimely successful gnrations postrieurement of synths, calls the sweet name of Barbary: workstation!

Coyote73's review (This content has been automatically translated from French)