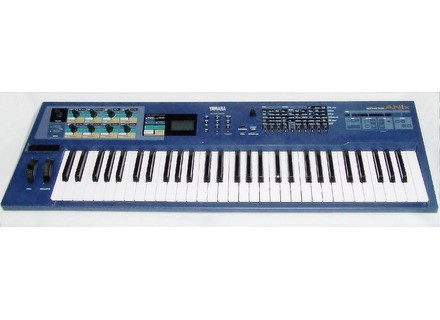 Yamaha AN1X
5
I purchased this for $500 during the great Sam Ash blowout of 2000. Before the blowout it was retailing for three times as much.

Synthesis Architecture
It's a ten voice virtual analog synth with two oscillators, two LFO's and a single multimode filter per voice. An additional high pass filter is located at the end of the signal chain, but it's passive with no resonance. The AN1X sports a ring modulator and white noise generator as well as FM and Oscillator sync functions. The oscillators have an "edge" parameter which allows you make them more rounded or more jagged. So you can go smoothly from a bright saw to a sine wave. One feature that stands out is the amplifier's feedback parameter. This emnulates the minimoog trick of taking the output of the amplifer and feeding it back into the filter. This adds a smoky, tubey saturation sound, warming things up nicely.

There is a well featured modulation matrix in the synth which can control nearly all synthesis parameters. Sixteen concurrent routings can be mapped in a single patch, allowing for a lot of expressiveness.

The scene morph function allows you to morph (i.r. interpolate) between two patches with the mod wheel. The morph yields lots of complex timbres and is much more expressive than a simple cross-fade.

Effects and arpeggiators:
The effext section is quite comprehensive which each voice passing through a multi-effect, a delay, a reverb and an eq. There's an arpeggiator on board as well as an analog style sequencer.

As you might expect it does analog polysynth sounds very nicely. In monophonic mode it does yield brassy Moogy sounds as well as some rather nice Roland type "wet" resonant sounds. It does lovely synth effects since it's filter self-oscillates. Of course it doesn't do natural instruments like pianos and violins at all.

It has a clunky wall wart power supply, The filter does stair-step on high resonance settings. I wish it had an octave/transpose button.

It's well made The casing is plastic but feels sturdy. It's extremely lightweight and convenient for gigging.

I have had no problems in the 2 years I have owned it. And I am thinking of geting a second one because I like it as a controller.

It's emerging as a cult synth. Although Yamaha has put much of the functionality into the AN200 board and the PLG-AN plug-in card, the AN1X appears to have an ardent following. With good reason.

Yamaha AN1X
5
Analog modeling synthesizer.
5 octave keyboard dynamics ... Particular features are the easy ...
The keyboard is good, against a plastic hull, Yamaha could have done better.
Real-time front panel controls, everything is quickly accessible and understandable.

for use, the manual is very convenient (especially for programming scene).
The manual, which is essential for the discovery of the device at the beginning is pretty much done, except for returns: an explanation is given then glue "if you want to know more about this or that, and look at page .... it's boring.
the handling is quick, everything is accessible by rotary pots left of the keyboard (VCO, VCF, VCA, LFO FM ...). For the rest (effects, game scene ...) a matrix with a selector is present hard right.

It goes to the heart:
great synthesizer with 2 oscillators and noise generator can be programmed all kinds of sounds, models emulate analog synth.
Needless to look for acoustic sounds, this is not a ROMpler!

The bass is superb. we get no closer problem sounds a Moog Prodogy!
Pads, strings, percussion of the hovering ... endless possibilities.
Leads, aggressive or air, only your imagination sets the limits.
And fx: pure madness !!!

effects, very good and varied, adds the key to a sound coloration to convenience. Reverb: superb chorus .... everything is good!

A small portion of FM synthesis is based on the board; on the other hand I have not hooked on this (I myself am not retarded either): we like it or not like it.

For the non-programmer, there are banks Sysex on canvas. for fans of Mr jar is a bank with sounds of oxygen, Equinox ... it's super damn good, but it's not my cup of tea. With these banks, there are tons of sound bases just waiting has to be modified to include in your compositions.

I used it for 7 years, I do not see the end so the possibilities are enormous.
I'm not a big fan of Yamaha, I find them quite cold synth (this is my opinion, sorry!), but AN1X a heat that I was not familiar with the Japanese manufacturer.
I sold part because he resented (I had bought for a small OCCAZ with broken plastics, he fell);
I think probably bought one in good condition. but it's not my priority.

This is a great synth, it still hold the road very well meet current standards. A timeless synth!
If you find one, do not hesitate for a second!

Cola verde's review (This content has been automatically translated from French)

Yamaha AN1X
1
Characteristics are known, but I would emphasize the ability of the machine to produce various types of oscillators. As we know that the sound signature of analog comes from both its oscillators that its filter, we understand why the AN1x also offers a varied sound pallette.

The keyboard does not please me at all with a race too short keys. This gives the impression of having a wedge below the key that locks the device ... aftertouch is may be responsible. I would rather be deprived aftertouch but have a race longer key.
And the keys are narrow (less than 2.5 cm on a piano on a beach of 61 keys that's a lot)

for some sounds it is very close to a true analog ....

Yes, very good choice, I think aquérir a PLG AN board if the opportunity presents itself against but it seems that the sound is a little different and less hot by some to ..... for now I keep my AN1x while most of my synths have been sold .... that is to say ....

Fenschlive's review (This content has been automatically translated from French)

Trs simple to use. Just open the manual.
Everything makes sense with the matrix edition that helps a lot because if the screen is small

If you are looking for bass, leads or pad for your nice music (trance, techno, goa ...) and for cheap ... take the one l. .., O) There are better (Nord Lead! c !!!!!!) but not the same price ...
It's not a keyboard with XG sounds acoustic. it's a real synthtisuer.
Some nice organ, same for the EP but otherwise it's good fat dynamics in low and very sharp in the treble. Filters are good without being the best in the market but also as a matter of taste.

A bo synth blue advisor ... but cost before. If you are the azz, look elsewhere ...
Good quality price
I sold a 6 Emu PK got my most versatile style of music that I play with my band.

Did you find this review helpful?yesno
»
Read the 15 user reviews on the Yamaha AN1X »

Yamaha AN1X manuals and other files

View the 8 files about the Yamaha AN1X »