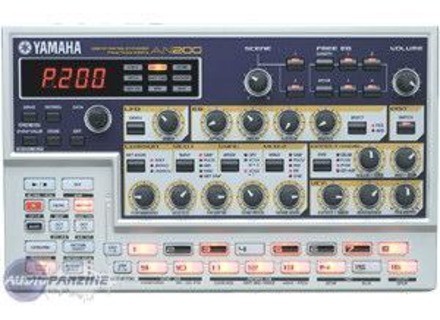 Ranz Adamson's review"A maintenance review of the Yamaha AN200"

Yamaha AN200
4
A lot of great reviews with regard to functionality, however, now these are starting to age - I thought it was a good time to show how to repair one the most common problems - a failing data encoder!

I will be doing a functional review using today's operating systems and the aging legacy software to still manage and connect to the AN200 - coming soon!
Did you find this review helpful?yesno
»

Yamaha AN200
5
I recently bought this unit from Zzounds.com for $200.00. I felt this was an excellent deal as it retails for $600.00. Don't take their advice and buy the optional power supply though, as I did, only to find out the unit was shipped with it's own adapter.

This would be an excellent introductory unit for anyone looking to add a groovebox-style instrument to their sound (DJ's, a band, whatever). I thought about buying a Korg EA-1 until I saw this box, the analog modeling is as good or better than the EA-1 and it includes it's own drum and bass sounds, plus three tracks per pattern to sequence them! The synthezer voices are fully programmable and remind me of the Korg PolySix I used to have. Each pattern has a "scene" function, where each scene consist of 2 different sets of stored synth voice parameters; you can then "morph" between the two with the scene knob. You can dramatically alter the synth voice with the different waveform settings, tweak it with the LFO, or boost it with "Distort" button (useful for lead synth sounds). Also included is an effects unit assignable to the synth and each rythm track (delay, flange, phaser and overdrive/amplifier). The Voltage Control Filter is another really nice feature, also assignable to each rythm track. The sequencer is intuitive, easy to use, and provides a wide range of swing time. The unit comes with software that gives you full MIDI control of all parameters, but I've been having so much fun tweaking the box manually I haven't gotten around to that yet.

A drawback is when you are playing patterns in real time, and you switch from one pattern to another, the first note of the synth voice is cut off. I've noticed that if the synth voice is kind of low it's not as noticeable. I don't think this happens in song mode, but I haven't written any songs yet (the demo songs don't cut notes whent they switch patterns, so I'm assuming it'll work the same when I write some songs). It'd be nice if the synth and the rythm tracks had seperate outputs, but having fewer outputs seems to be the trend (I've got an ES-1 and it's the same way: a headphone out and a left/right line out).

In my experience, Yamaha has always made quality products; I had a DX-27S that flipped over on it's face from a height of 3 feet, and continued to work after that with no problems. The box is plastic and looks sort of toy-like, but the knobs are solid and made with grippy rubber. I don't think I'd want to experiment with a three foot drop but I anticipate no problems if it's transported in a case. Nice big display too.

I'm really satisfied with this unit, I got a sequencer, drum machine, and an analog synth in one, for half the cost of comparable units. What else is there to say?

Yamaha AN200
5
This little synth/sequencer/drum machine is packed with features. The only thing missing is an arpeggiator. But this is a super powerful tool.

The manual is great, very simple. a little lacking on the science of sound synthesis, but i learned a lot from the internet. once you've been playing with this box for a while it's great, especially if you trigger it from a 64 note keyboard (the 12 note keyboard on the box is a little limiting).

it's &quot;robust&quot;, but i'd need more than one to play a lot of my stuff live, as i layer the synth sounds i've got. in terms of hardiness, this thing is made of metal. it's tough and won't be breaking any time soon, a definite long term investment.

This synth is pretty versatile. It's good for house, techno, trance, and jungle. The synth effects are great, with 2 oscillators that can be master-slave or work just one, you can sync pitch the two oscillators, it has some good noise and distortion effects, a 2 pitch lfo's (sin, square, pulse, and a few others), a variable delay, flanger, pulse, and distortion effect, cutoff, feq, and resonance knobs. it's great to change these effects in real time. the snares are great too. however, the bass sounds are few and far between, but with a lot of tweaking you can get some phat sounds. i write drum and bass, and getting lots of cool bass sounds has been my main problem.

I love the synth sounds on this thing, and it has good drum sounds. all in all it's just a fun tool to play around with. great sounds, easy to use, versatile. it does the work of 3 machines. i've had this thing for over a year now, and am only begining to scratch the surface of it abilities.

Originally posted on FutureProducers.com
Posted by: Unknown ( 4-, 2003)
Did you find this review helpful?yesno
»

Yamaha AN200
5
I will try not to repeat what has been said in previous reviews also ...

Format groovebox for me the ideal. Why? It takes up less space than a keyboard is programmable single transportable (pads can be used as extra keyboard) and ca can make sentences more easily than a rack. However, this is not a groovebox common sense ... A more limited both in sound and a typical pallet MC for example, the sound that comes out has however nothing to see with this one who looks for typical analog. The synth part is limited to a track, as saying that apart from minimalist electro, and despite the system mixing two patches, it&#39;ll just be super for anyone who wants to be limited to this bike. The rhythm part is well made but it quickly turns round despite some editing capabilities. Few less percussive sounds (bass and fx) we are at the end of the keyboard are also quite limited.

The effect part is rather anecdotal, although I find many effective overdrive. One effect of the 4 arranged by track (4 tracks including three rhythmic therefore) + overdrive.

For the synth part, I agree with the previous review, big sound analog typed in that spot rather low, with one side a bit unstable ... The very pleasant system mix between two patches is excellent, it has still a variety of sounds pretty huge even with the limitations of the editions façade. The filter is effective without being ultra violent, only the depth of the filter envelope (FEG depth) reacts capricious, not always pleasant with a staircase effect.

We saw the edition of the sound complicated when you want to go a little in depth or from scratch ... A look at the silkscreen knobs give you an idea. However, this machine is just me finding ideas from things already drawn, and avoids the blow of losing the menus for efficient sound and not too experimental. To be honest, I do not know the software, and I prefer fighter with the venom of the leaves make a sound research ... With two operators for each "scene" (or patch), there&#39;s still a matter to stuff that will cock in ass (200).


The sequencer is effective without being perfect. Registration movements knobs (16 bars) alone has justified its existence by 8 measures against programming is just too much for the rhythm part (in my opinion). The annoying thing also also can not deactivate recording or even change tracks without stopping the sequence ... It is personal and it is drunk rédibitoire to compose live. Otherwise it&#39;s classic groovebox staïlle.

editing sounds is said above, it is indeed the black point of the machine. But it is a replace in the architecture of the machine: who has a bass-station such that sells without the same price range, or n "any other mono synth, it has direct access to some more parameters, but significantly less margin synthesis on this machine.

An annoying thing though, is that there is no preset location. It backs up the entire sequence more sound settings under the same number ... it&#39;s a bit stupid, but it&#39;s groovebox baby.

I among other electro, hip hop, to the atmosphere. For the first two types ca goes well, there&#39;s more to press against by the atmospheric layers, although the act of mixing patches and modulation possibilities for long envelopes allows creating very interesting kinds of drones ... The machine is more comfortable in percussive sounds with the support of the sequencer.

I had all kinds of groovebox other brands and it is truly unique. It is more a synth with a sequencer and a practical electronic drum kit that sounds although limited. I also have her twin sister, DX200, much more capricious edition (FM synthesis requires) and whose sound approach than my style (although I&#39;m big wobbler with!). Both are complementary to the synth part, but the PCM kits are the same and that&#39;s a shame.


This is a box that sounds undeniably make a lot of jealous VA for its sound quality and some analog for its range of possibilities. Definitely worth the shot OCCAZ who love his particular format. As I say, we must look beyond the screen "all in one" and that she not play in the yard groovebox electribe Korg, Roland MC or EMU. However, its particular format allows things we would not do with AN1X, version Keyboard shipping the same card. Little or no sufficient alone, she hides a sound monster for a really reasonable price Cygnus.

I think this machine (and even its FM sis) are not going to be eaten by newcomer low cost analog which are still much more limited. With defects of ergonomics, some fagilité of encoders, it remains a UFO craft a little for his time that still has wood to send for a few years.

I&#39;ll come edit my review if I put one day hands in the editor (just). It&#39;s been a song that I connect the binoculars on a lil netbook to take a look!

Did you find this review helpful?yesno
»
Read the 11 user reviews on the Yamaha AN200 »

Yamaha AN200 manuals and other files