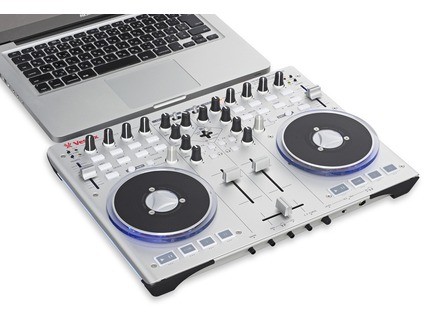 VCI-100MKII, MIDI Control Surface for DJ from Vestax in the VCI series.

Have you tried many other models before buying it?
Not at all. This is by searching the Internet I found this controller. I was looking for a controller that is strong, with a good price / quality ratio, and using the most features of TRAKTOR. Given these criteria, the Vestax VCI 100 MK2 was and is the best controller on the market.

What thing do you like most and least?
Pros: - This controller uses four decks;
- It controls perfectly fx TRAKTOR, in addition to its ability to use 4 fx units;
- The presence of filters;
- The reactivity of the knobs and the locking of those mix;
- The accuracy of jogs wheels.
The -: - Non crantange knobs gains and filters, this is the only flaw I found him!

How would you rate the quality / price?
Top notch! The equivalent model of Native Instruments, the S2 is 30% more expensive ... and has only 2 decks!

Moksha.Project's review (This content has been automatically translated from French)" Degradation in a few months"

-Not before buying but for the kontrol Z1 in NI.

The +: The reactivity of the knobs and the locking of those mix.
The ability to have 4 groups with traktor scratch pro fx (fx The 12 are assigned directly, not bad)

The-(s): Non crantange knobs gains and filter, 0 being at a bit boring in full center mix it sometimes not knowing exactly where it is without looking traktor.
The pitch is not super accurate.
The jog that unscrew a little, it is possible to manage the strength of these, but is a good motto in full mix and got me totally shifted sound use force, then the registration with the jog imprecise remains difficult ....

The BIG BIG - the controller is that the usb output only works very well liked after a few sessions, however, placed on a table, and it has never dropped a big flaw (big disconnect full mix, 5 times over 1 hour ... . bummer!)

I recommend, if you play a hand in sync and you're not afraid of the manufacturing defect that is the usb output, I do not think it is all good controller but ....

slamspider's review (This content has been automatically translated from French)" Tested mixmoove 2011, is a very good machine"

Booogie's review (This content has been automatically translated from French)" Okay!"

- Did you try many other models before getting this one?

+ Perceived quality, robust and lightweight at a time.

+ Set the hardness and jog jogs in themselves are nice (he took a grip on that a little more).

+ The faders are neither too hard nor too soft.

+ The integrated sound card this time unlike the old VCI 100 and that looks to be very well made, I have not tried that with me and I'm working or not yet but it 's looks very good, and allows course preview.

The + button to browse for the selection of track.

- The race to pitch a little short but I chipotte because contrary to what one might expect, there are still many adjustable and can manually calibrate and banish the Sync button

- Switches to move to lanes C and D is good, but 2 additional faders would have been better.

- The version that comes with Traktor LE is very limited as some know it and can not operate the machine which I think is commercially not terrible from Vestax. That the pro version makes things more ok and it's a personal choice than to buy, but the version supplied does not permit: to have the 4 channel mode and use of filters so that they are functions on the controller at this price point they could have included the pro version because it is 100 € to 700 € budget then Eton is even closer to the S4 S4 Traktor version that included dedicated ... Brief enjoy, prefer a Pro version.

- Yes I think it is perhaps a little early OPUR answer this question, but to use that jen did it for me, I mix in a bar so it's enough.
Those hoping that this review will be helpful

Published on 01/24/11
The VCI-100MkII integrates 4-deck control, new MIDI controls, and an audio interface designed to allow DJs to include CD players, turntables, samplers, or effects into their Digital DJ set up.