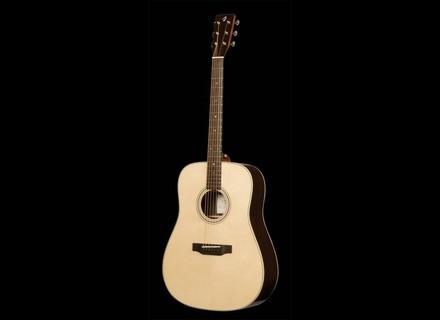 Breedlove D/ERe - Retro Series
5
It is for this guitar a series made in Korea but creates the U.S., at least that's what is written on the label on the bottom of the box.

Despite this, the guitar takes the traditional style guitar like Martin pre-war one finds the famous dam X, lifts open (Grover of the way) and the simplicity of the finish that I actually find the charm of this type of guitar.

Included a case that protects well the beast. It is plastic but not bad at all ...

No pan of cut (mostly not), a true dreadnought!

For cons, I have a little note, when I received it, I have brought him to the luthier for the E string curled slightly at the 10th box, nothing too bad, it did costed only 10 €. But I do not know anything about adjusting the handle, I had to go see a specialist.

So then I would say stick satin, there it was real! Besides this one is very enjoyable to play, it does not hang absolutely a treat!
When the handle itself, it is D-rounded but not too broad without being nor end, it was well in hand it is very easy to play ...
Good afternoon, this is not a dreadnought cutaway, so if you want to play until the 20th box, it will be forgotten with this, I would say that it is easily accessible to the 14th freight, ample ...

This is a solid wood guitar, so it starts to weigh a little but mostly it has a certain size, for someone quite this menu could be a problem, I have no problem with that ...

The open lifts are very good at Grover, accurate tuning they take it very well, even with a quite sustained not need to connect the instrument to each piece!

Sound! This is where it makes sense!
It sounds and it sounds great even! the sound is deep and balanced, it is expected a rosewood, good bass, clear highs and mids present. If you play softly, it sounds perfectly fine and if you gum it follows without flinching!
However, the sound is still "soft" in contrast to a guitar with spruce STIKA. Which allows play nice rhythmic brushed with a pick or fingers.

I was in this particular guitar because I was looking for an instrument with sound approaching that of American guitars, especially as Martin ... Obviously, it does not ring a Martin, but when I listen to the songs of Neil Young, I find the sound very American folk!

However, in spite of its very Country / Bluegrass, it remains versatile, I think it rings in all styles precisely because the sound is not too typical.

I have this guitar for the past one year and a half at the time I write this opinion, it is no longer manufactured for Breedlove to review these models, a very poor choice on their part I think because I found their old models significantly more interesting and I was close to reinvest in a guitar purely American home but unfortunately it is no longer in the catalog ... Shame!

Yes, a pity because Breedlove is one of those manufacturers who do not have the reputation of Martin, Gibson or Taylor instrument and are much less expensive for equivalent quality quite see better especially for Asian models Breedlove near the bottom range of these American brands.

This guitar is simple because of its finish, and I think the manufacturer has therefore highlighted the quality of the violin, at least that's the impression felt when he was in hand!

A good choice I would do with your eyes closed and that I recommend to many people!
You can still find new home sellers who have not passed all their stocks ...