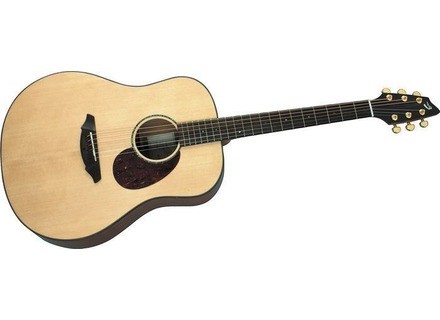 Breedlove AD20/SM
4
The Breedlove AD20/SM acoustic guitar was made in the Korea and has 22 frets. It is strictly an acoustic guitar as has no pick up and therefore has no tone controls. It is made of mahogany and has a great overall feel to it - both in the neck and the body. It is built well and is designed both for feel and sound, which are the two most important things to me when looking at guitars.

The neck feels flowing and it is easy to play all around the neck. It isn't too heavy and the big body of the guitar helps to add to its big tone. It is easy to get a good sound out of this if it is in proper condition and is set up properly. I love the overall sound from this guitar as it is fuller sounding to me than most other acoustic guitars.

This guitar is good for all types of music that you would want to play acoustic guitar on. It has a full range, both with a solid body and bass and a crisp high end. Its good feel makes it easy to play and therefore easy to get a nice sound out of it. This isn't the best sounding acoustic in the world, but it is above average and full in tone.

I've had my Breedlove AD20/SM for about five years. While it isn't my only acoustic guitar, it provides me with a great option that I know I can rely on for a good sound and will always be easy to play. The price is reasonable, but there are plenty of other guitars out there that are great at this price and for less, like some of what Martin and Taylor makes. It is a good deal, but I would encourage players to go check out the guitars for themselves, as different players have different preferences!

LeBeginner's review (This content has been automatically translated from French)

I do not like too much the binding of the fund is even quite ugly. It has the same shape as the shield on the body. Yuck!
But honntement I n'achte over my guitar because it is beautiful. So in the end, I do not care a bit. I do not endorse. Other apprcieront less!

With a C shape and satin finish, the handle is a real rgal.
The case possde a more traditional varnish.
Although a rather small box, the guitar s'avre relatively heavy. But with a good strap, it's not a problem.
Lack may be a little potato when playing the finger, but that in his dtails!
Personally, I play most often with a rather fine mdiator (Jim Dunlop 0.48mm). It gives me is the sound I love.

The sound!!
Well, that's what surprised me when I tried it. At this price level is simply INESPRE!
Clean bass and treble but not crystalline mtalliques. Harmonics not knowing what to do and a great sustain. Trs equilibrated sound!
It's the sound that I researched!

I've had four days!
Littralement I'm in love!
What I like most? Sound ... Obviously! The playing comfort and price!
If I tried other models before? Oh yes, and much more expensive (Taylor, Martin ...)
THE qualitprix report is simply incredible! This is the ball Atomic!
Is what I would do this choice? your opinion?

EDIT: When I reu my guitar, I t's just because I could not find the sound that I had tried in the store. But in a few days (less than a week), the sound was skating and now he has really taken a nice size. Truly a Russianness!
Did you find this review helpful?yesno
»

lilacwine400's review (This content has been automatically translated from French)

Breedlove AD20/SM
5
This guitar has t made in Korea. Say anything about the finish is well done (and trs simple)
I must say the only weakness of this guitar the look! it does not really have style, or at least a style that is being discussed (the shield burgundy and binding of the fund in the same pattern, it is not my thing ..

Channel trs enjoyable, easy to play with a beautiful matte varnish trs.
A guitar suits me perfectly, as in picking strumming

L is really happy!
4 This is my acoustic guitar .. I went through Fender, Epiphone, Washburn now I know that I will stay at Breedlove
For history, it is my ERRF buy one, I fell in love with the sound in the second and I tried. It took me two weeks to sell my guitars and buy the l.
It has a trs his deep, serious, dull, trs trs own. You will not find a sound overly lens / high way most mid-range guitars (including Fender). I advise all levels, even for beginners. it's so much more motivating to play with an instrument that sounds at once beautifully!

I for 1 month. I play 2 times more often than before
I pass over the look without much personality for some it is an important CRITERIA, for me it is secondary.

This guitar is a quality price ratio out of the ordinary. Bought 600 (normal price 830), was a sound that ACCS & Martin Taylor would have us pay double the minimum.
And the icing on the gteau: there is pleasure not to buy the same guitar that everyone (except me with my ERRF!) .. you know a lot, you, the homeowners of Breedlove?
Did you find this review helpful?yesno
»