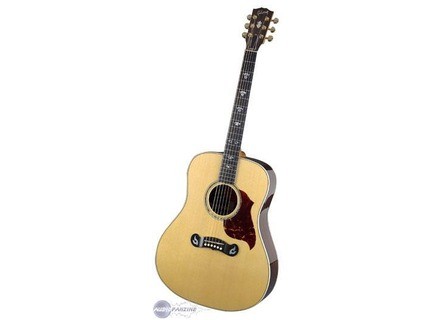 Gibson Dove
5
I started playing at age 14, so now that's 35 years ago? Wow. I thought I'd be better by now! Played in several bands from High School through the Navy, played in USO's overseas and in the states. Now, play contemporary Christian music. Still manage to play some older country and bluegrass as well, though.

I bought it in 1979 after seeing one in a music shop in Jacksonville Beach, Fl. I looked through the catalog and saw the Cherry Sunburst color and knew right away I had to have that guitar. It was very expensive, even though I got a huge discount on it I still paid $825 for it. Today, I've seen them list for 4 grand.

The build quality is wonderful. The sound just keeps getting better every year, deeper and richer. The tuners are still originals after all these years. It's basically everything you would expect in buying a Gibson guitar and more. I like the ease in which it plays. Very smooth all the way up the neck.

The only thing I've seen is the string position (action) off the fretboard. It gets wider than I'd like and there doesn't seem to be much I can do about it without major repair. It's not bad, but playing a newer, acoustic/electric you can tell the difference.

The construction is superb, the quality is first class all the way. The color is still bright after 26 + years, and it looks almost like new still. It's worth every penny I paid for it.

The Dove isn't for everyone, obviously, it's very showy to some folks. If you don't mind showy, and have the extra cash lying around, go for it. It's a lifetime investment that will only get better with age.

See all 75 photos of Gibson Dove »