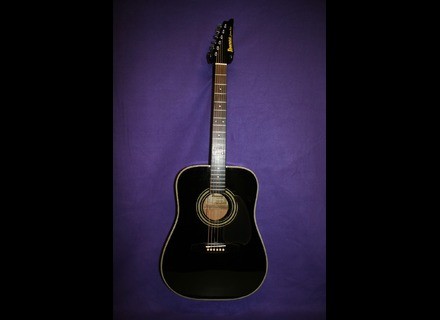 the handle is very comfortable and the action is optimum (for mine ...
heel tiny fulfilled its role surprisingly well because the body handle junction is still perfectly aligned, however it should not be abused on pulling the strings.
the sound is balanced, with a bump to the medium, there are serious despite the fineness of the handle

matter of taste! it belongs to everyone to try the guitar that covets .... or not (there's really twisted!

owl scratching its playability. it covers almost everything without any problems (a folk bossa) spectrum balance, we could blame a lack of character, but it is the price of universality!
hat designer who for a handle end also have nothing sacrificed ...
Did you find this review helpful?yesno
»

sherpa64's review (This content has been automatically translated from French)

Ibanez LS300
5
An Ibanez original, made in Japan in the 90s, for a short time, making it a MODEL rare.
20 small frets.
Dreadnought body with a handle and a head electric guitar!
table in solid mahogany enough pais, mahogany sides and back (seems solid), mahogany neck, rosewood key, mechanical Gotho ts of good quality.
Satin varnish end that puts the wood value, wood and let live.

The handle is typical Ibanez C, trs end, but it is a dread without pan while for acute stroke ... but I got trs enjoyable.
To form, it is a good dreadnought, rather cumbersome, but easy to take because the handle and the head are LGERS.
This is not necessarily a beginners guitar, the frets are fine, but the sound box to mount a light shooting without losing the sound projection.

Big sound! Of mahogany, no doubt, and the age of the guitar has aged well trs in s'amliorant from year to year.
Sounds hard when playing rhythm, the sound is deep and Dfine quad is played by finger picking, his area of ​​prdilection (shape of the handle forces), with a prdominance for serious, although the treble are be clear without sounding crystal clear and well mdiums Submitted.
A guitar with the personality that still surprises those who dcouvrent, a rich deep sound even muted, and substain which to be proud!

I found some time ago, but since I do not play on it, leaving just my Takamine and my CORT SFX 10.
Trs original by the shape of the head, the fineness of the handle ..
It is simply different and rare, and question her, she did not envy the greater. For jou lot of guitars, I found the technique, but with a SON! And a look that is unusual (I do not spend inaperu when I play with ..)
This is a vintage guitar collector, so she did not have a price ..
If you find one, try, and up to 600 euros, you will still a good deal.
And if your a collector, go for it ....
I Discoveries by chance, and not CHRE, but I'm not prt of selling, even twice ... and if I find another CHRE not, I take it for my son to me too often the tax.

Ibanez LS300
4
It is a dreadnought acoustic folk format produced in the mid 80s.
Color black lacquered (ls300bk) with white pinstripes, no frills.
Back, sides and mahogany neck, spruce top and rosewood fingerboard, 20 frets and chrome tuners.
Six different models were produced including versions table or even a maple neck and cutaway colors ranging from black to light wood through the sunburst.
In terms of the headstock ... I love the look - inimitable -

Good ergonomics despite the dread format (used by my 11 year old son). We think of the handle designed for the electric guitarists feel comfortable on an acoustic, and indeed my son takes it out to avoid its stratum of his room.
In terms of sound, it's powerful enough to not be in exact amount of silk & steel (low strings comfortable pulling). Level and quality ... refer to the woods after a matter of taste.
Access to acute facility that will be on the cutaway ...
Given the size of the fund and the particular size of the handle, I do not necessarily recommend this model to a beginner, but given the ease with which my young son was adopted ...

The sound has a good projection improves by playing - bought second hand, it was not used for some time - the spectrum is well represented with a good definition but not be typed as an American ... in fact I ' just like ....
Obviously, I'll go with 3000 € choose a Martin but opportunity to € 2 / 300 is a very good choice!

Used every day at my place of work during the MIDI break for a year I'll replace it with a baby taylor for practical reasons (size, weight, especially with a hard case duplication - we will try to rationalize the use of guitars ...).
I bought it to go from classical to folk and it has since succeeded in Alhambra has left room for other folks but electro (zt ibanez seagull) to play with my son and his Stratocaster.
Obviously, I'll go with 3000 € choose a Martin acoustic, but for a hand to € 2 / 300 is a very good choice!
Did you find this review helpful?yesno
»