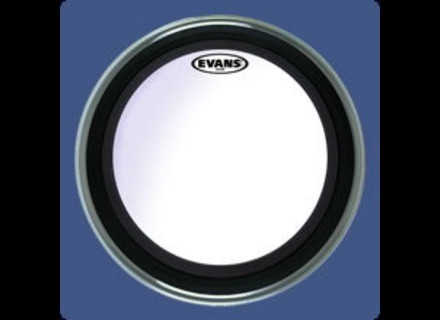 All user reviews for the Evans EMAD bass drumhead coated

Evans EMAD bass drumhead coated
4
Sound level: The EMAD sounds more serious and less precise than EMAD 2 (see my review ADEM 2) The EMAD is I think ideal for styles that do not need a bass drum that sounds for 10 seconds or at the opposite must resonate 3 tenths of a second. It is not in the bass drum without an attenuator, which argues for two hours, and not in a hyper-accurate sound for bass drum sound of black metal. PS: for those who notes rating on the material: if it is to say "it's crap" ... do not notice anything because you do not understand.

kastordrums's review (This content has been automatically translated from French)

Evans EMAD bass drumhead coated
4
I use this skin for 4 months on a 24 "is my skin deuxime 24" (SK APRS one) so my opinion is too subjective for now, if not 22 "I think I have a not test everything in doublepli prs (pinstripe superkick2 g2 powerstroke ...)

The - unnecessary outer rings (one internal, most would do) because I think there is too little diffrence to offer something of this nature, difficult to tune,

Basically an exellent skin at a price that goes well and offers a good alternative to the SK
(A bit less bass, but over and slamming down mdiums)

TESTED
View price information
Did you find this review helpful?yesno

Jonathan74's review (This content has been automatically translated from French)

Evans EMAD bass drumhead coated
2
Hello all I vien to buy that skin but transparent.
Well is not a good deal, I find that the strapping system (muffle emad) is the gadjet there is really very little difference in sound between the two size attenuatteur.
The skin is very thin and the sound is not catastrophic foams.
Basically it is a skin "shit" with attnuateur playing the cushion part in the kick.
Only positive attack is very clean and well slap because the skin is thin ...
Otherwise I feel I have to be me 55Euro,
the Eq3 is better now jen had one on my old drumkit ... I'm really dcu because I buy to replace the original skin and the sound is barely better now.
I also have a eq3 rsonnant perc is very well and good production (see Evans Eq3 pierces black)
View price information
Did you find this review helpful?yesno

voodoocry's review (This content has been automatically translated from French)

I bought this for my skin very special bass drum 22 "a month ago.

The first thing that stands out is the look of the skin with a black outer circle (on the bat struck by the bass drum so). This feature is explained by the fact that we can interchange the 'mute' circular foam that slips under the black circle, without removing the skin.

Before using it, I played mostly on Evans Genera G2 or G3. I also tried a transparent Aquarian superkick II, whose sound was really excellent (power!) But has relented.

The difference with these skins is that it sounds much better! Indeed, it takes a sound that does not compromise after adjustment: no choice between power and musicality, it was both! To return to the setting, that is why the 9 instead of 10 side note, because you have to spend some time (more than a superkick or sound is there right away) but it ' G2 is easier than, for example.

I tend to reach more than superkick II: it has the same explosive power but the grain of the sound is more musical (to me). To sustain and response, we can change the circular muted since the manufacturer provides an additional less dense, for interchange with the initial climb, all in 10 seconds flat!

I sanded to have taken a warmer sound, it is very deep (which is rare when you have a skin that 'slap' well), I imagine that the transparent version resembles more of a superkick II (which really had the inspiration).

The value for money

I'll see if it lasts a long time to speak but at the other Evans skins (quite expensive so). I added the patch for Evans double-pedal to increase the life span, the attack is a bit less aggressive but still very powerful. I play rock, funk, fusion, metal and it sounds for all (not for jazz anyway), I do not really regret this test (winner).
View price information
Did you find this review helpful?yesno
Cookies help us improve performance, enhance user experience and deliver our services. By using our services, you agree to our use of cookies. Find out more.