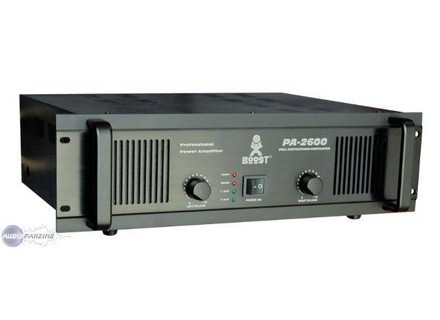 All user reviews for the Boost PA 2600

It is more reliable and durable.

Ipwarrior's review (This content has been automatically translated from French)

Boost PA 2600
2
- How long have you use it?
He has served only two times: once in the new year and another in the evening of July 2003.
Compared to the PA2200 served every evening.
- What is so special that you like most and least?
It was cheap to éopque it helps out, he does not like high hps BL
- Have you tried many other models before buying it?
PA2200 except at the time not.
But then: there is a design change between PA2200 and PA2600 one, so I write this review now.
- How would you rate the quality / price?
Not good indeed, but the worst when you know why you will roar with laughter ...
- With experience, you do again this choice? ...
No!
Differences in design-PA2200-PA2600:
PA2200: single power supply 60 Volts 250VA 10000μF
PA2600: double secondary transformer power transformer not shown 4700μF 94Volts
So here:
At Boost we are a bit silly: we forget that a single power supply is better for the bridge, for example, to distribute the current between the condos.
In fact on the map of the PA2600 amp, two power transistors have been removed: balance the races: the current protections are activated by the voltage detected on the emitter resistors, suddenly, it loses power in gross phase:
to save four transistors, we therefore gun down the perfs of the amp. Bravo.
Then the transformer'm not really I think this is a 1000VA.
Transformer ref:
048-00300-001
2002
In short, this amp was deliberately restrained, which is still quite annoying.
For me the fan is normally fixed on the two sinks amps: no strange attachments in mine.

It is clear that the choice of a separate power amps for an amp is economy class, something stupid.
It's still the only class that I saw AB +-94volts supplied, which is huge: the amp heats up and it makes perfect sense (it has never cut, even in saturation at home into 4ohms).

The only possible upgrade is to the switching modules in fact.

It's a shame: a transformer with a similar setup in class H would have given much better results at a cost not really higher.

Having removed the power transistors on the amp that this mark (KoolSound) is banned: there was therefore a misdeal between PA2200 and PA2600 sale.

djludo34's review (This content has been automatically translated from French)

Boost PA 2600
3
Hello DJs and aspiring DJs aprentas, to sum c is nice boost at the beginning we kan starts just in the sound system with a small budjet and especially kan was not the musical ear quality cot becaufe there is no and foremost not low but hey its all relative m had not cost too much kan I bought the 7 years ago with four speakers also boost 15pouces 200w rms if I remember correctly, jai lucky in Kelker dixaine of accessories ke j did it with the I've never grillal epoque trs was not violent j) I j parcontre pt 2 boomers and beaucouuuuup of piezo, but good replacement did not cost much , al unites the piezo fesait 5ou6 euro and 30 euro boomer or so, to replace all its and strain into the big day I opt for a Yamaha P3500S amp and a pair of HK prpro15 ...... .... as compared renault and mercedes and yet not much more expensive jy kan Swans Reflecting
Did you find this review helpful?yesno

logabass's review (This content has been automatically translated from French)

Boost PA 2600
4
I have used in this type of amp orchestra repeatedly to average benefits, it is not an extraordinary quality but give a lot of services.
For a DJ or a band sound with dsirant is to start, great, more price-quality ratio is unbeatable.
Did you find this review helpful?yesno

sasaintete's review (This content has been automatically translated from French)

Boost PA 2600
1
I work in PA for 20 years, and I worked 8 years until the end of 2006 in a store that sells boost, and although I have tried as I wanted at the store, one thing is sure I am very happy to have set the price for real amp for my own sound systems (and dynacord QSC). A proposal of Boost if you want a medium like the phone screaming, low medium (as low conait it not) a terrible fever and soft poor quality protections fictitious, and if you want to know what it is to have an amp that loose in the middle of night, and more if he or Exelle you want to cook eggs or warm your feet on it then you have found the gem of Boost and buy all these points you will really not disappointed,
It may even, when you get tired of it back for repair, use if you remove the tray cover a geranium. Remember, a good potting soil and water from time to time. Sincerely. His Holiness. va@skynet.be

saimon's review (This content has been automatically translated from French)

Boost PA 2600
2
I'm going to have a brief jen for 5 years, never had any problem so I think for good and I cest dpanne when nothing else jai.
He is being protected even in the circuit court to admit that he being protected Acesta owl.
For cons
Comparable vacuum fan.
Cest-sound soft and soft in May while fat.
-Not DEnter symtrique

Finally, a vulture that side; absolutely prohibited for any application of quality.

nb an amp that protects short cicuit ca saves the benefits if a guy is PRAND feet in a crouching or walking Speakon. if it smokes longer plays ca.

djmax88's review (This content has been automatically translated from French)

Boost PA 2600
1
I do not own this amp, I just test.
Verdict: well if you empty the Interior can make you a nice range techno cd I do not see any other utility.
As for those ads than in darkness and against short circuits or against remperature leve work very well, ask yourself the question, Is it a you would expect from an amp ? an amp that does not care about short-circuited just 2 things 1 - you know nothing in the connection and you do not make the difference between a socket 220volts and audio terminal, 2 - part I be the shit do not know which amp gets short-circuited without reason, I think it is the grave.
Finally remember that boost the amp sells EPA 5500 (2x500w into 8 ohms on paper 2x350 rel) for 499euros, crest audio markets the cpx1500 (2x300w 8ohm in the paper and 2x300w 8ohm real) for 449 euros in the knowledge that crest is recognized around the world for its reliable and stable amp, I have a personal crest cpx1500 and even background security did not start, never short circuit, never overheated, never pregnant Cramer and yet I am not kind.

Boost PA 2600
3
Well, APRS doing more studies, especially in the Contents of the advantages of ELECTRICITY and output are rotten, transistors and PDO are too powerful. But even when we just get a good sound if you put a qualizer just before, just to boost the signal for rcuprer the "softness" of the amp. Returning 6 dB max, if it is saturated just have something pretty good if we have good Hp. For example, RCF, Eminence, Beyma.
I'm trying to calculate in practice the power of this amp .... under 8 and under 4 .... we will see the rsultats.
Did you find this review helpful?yesno

Boost PA 2600
1
Mediocre say anything more
Did you find this review helpful?yesno
Cookies help us improve performance, enhance user experience and deliver our services. By using our services, you agree to our use of cookies. Find out more.