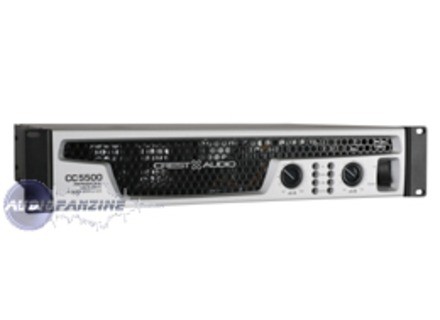 Crest Audio CC 5500
5
I have not tried this amp, but the CC4000 is really professional.
The CC 4000 holds much power overnight, faster typing and strong on bass without collapsing.
The bandwidth for the rest of the spectrum is very clean.
<span style="text-decoration: underline;">The only thing that may surprise:</span>
the same amplifier is produced not PEAVEY (same company) € 200 cheaper, and worse, the Award was presented to PEAVEY!
Too bad the Chinese production is compared to its closest competitor CROWN XTI 4000 made in the USA for almost the same price and preset programs + built-in filter.

<span style="text-decoration: underline;">HIGHLIGHT for 5500:</span> the manufacturer states in its operating instructions very well done "NO REVIEW"
Did you find this review helpful?yesno
»

FabriceBobo's review (This content has been automatically translated from French)" Fragile as possible!!"

What I like least:
- Power: to have the same volume I have to put my old eg CA12 less than half for the level of 5500 cc which is 2 x 1800W 4Ω while under the CA12 is 2 x 1200 Watts RMS into 4 Ohms illogical
- Reliability, has dropped the first ignition, the power he exploded back at crest and there is no guarantee told me there is liquid smoke inside. The we will have to explain myself because I am a disco and the amp is very far from the smoke machine, but good benefit of the doubt I stick another new amp
Meanwhile I make a sealed box with the amp inside a ventilated vmc takes clean air outside the whole system with a dehumidifier and then a new channel amp loose after approximately 3 months
Back at crest that said, there is no problem, my dealer asked to push the test and map their farts in his mouth while of course there is no moisture for me to deep
So he changed my card and return me the amp, upon receipt I see that the amp was dropped (twisted sheet metal) and when connecting I realize that clipe 50% power while his colleague ( the same) it is quiet
At that time I expect that commercial comes on-site to find defects

I judge the value for money not too bad if the amp worked, but this is simply theft

I certainly do not do this choice, or for any crest suddenly given their sav, I find the excuse of liquid smoke a little light, and when we saw a reference receiver down and he comes down. .. I still tank
Not to mention the announced power visionary
Short to avoid

Crest Audio CC 5500
4
I use it for almost 6 months to amplify 2 subwoofers 800 watts into 8 ohms. There's nothing to say it turns nikel I sonorise groups: blues, rock and hard rock and frankly I recommend.

PS: Do not forget that with such power should be almost forced to change its 4mm ² cable for the minimum, if not disappointment ...