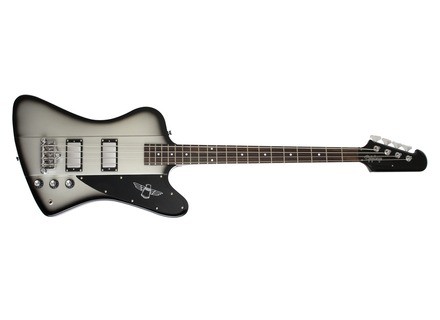 Epiphone Silver Burst Thunderbird IV
4
This is the 4 string, non-reverse headstock, version of the Epiphone Thunderbird in 3-tone sunburst finish. 2 humbucker pickups, volume, volume and tone knobs. Black hardware, alder body, maple neck with rosewood board and well that's all the run on incomplete sentences I'll include for this portion.

Local music shop browsing. These cost $299. I bought it, well be cause it looked cool. As an added bonus it sounds great too.

For still what would be considered a cheap bass, Epiphone does it right. The pickups are loud, yet not noisy. The hardware is solid, the instrument stays in tune well and there's plenty of access to the upper frets.

The action was a bit high. My biggest gripe with guitars in general is they are setup at the factory, then that goes south in shipping with climate changes, then stores put them right out on the shelf.

Hey a couple minutes worth of work, I had this thing sounding and playing great.

Well built. Expect a neck dive as the neck is heavy. A beautiful sunburst finish. Hardware is well built. Neck feels good. I believe it is a 1.7' nut measurement.

Great rock n roll bass. Full of midrange. I could get usable sounds out of both the bridge and the neck pickups solo'd or played together.

Epiphone Silver Burst Thunderbird IV
5
I got this bass from my local music store: soundcontrol in preston (official website www.soundcontrol.co.uk) for a amazing bargain price of £200 - the RRP is £389 and to be honest - it is worth every penny!

For starters - it looks plain awesome. Many bass players use the Gibson version (which is seriously way out of my price range) - these include Shavo Odajian from SOAD, Mark Hamiltion from ASH, The guy from Placebo and Frankie Poullain from the Darkness. It suits me very well because it is a huge instrument and i am rather big myself.

Not much really - i find that it does get fingerprint marks on it very easily because of its shiny finish. Also, the shape makes it slightly top heavy so when youre not holding it- the head goes down to the floor.
Also, it isn't the easiest job in the world finding a stand to keep it upright, tho i managed to find one eventually - it also doesnt fit into youre standard bass case easily.

Its a seriously solid unit and can take a beating. It has a bolt on neck and is made of two pieces of wood joined in the middle with a raised bit over the top. The pickups are twin humbuckers with a deep fat sound perfect for rock bassing. The controls allow for a good range of tone though they take a bit of getting used to. The tuners are excellent! It just never goes out of tune no matter what you do to it!
It comes in a sunburst colour with a white scratchplate or a fairly rare black colour which will add about 30 quid onto the price I think. I have never actually seen one of these black ones in the flesh and only a few websites seem to sell them.

This bass is excellent for anyone who has experience of playing. I wouldnt recomend it for a beginner or a small person at all simply because of its sheer size and awkward shape. It does however suit the big bulky rocker and it looks awesome on stage, I know that when i have the money - I shall be getting the gibson version.

The T-bird has to be the classic rock bass. It's unusual looking, it's HUGE and looks awesome on stage.

The Epiphone Thunderbird has a bolt-on neck and is made of two pieces of wood joined in the middle with the raised centre sections fitted over the top. That's really the compromise you have to make for not paying out over a grand for the real thing. As far as I'm concerned, it doesn't affect the playability or tonal qualities of the guitar to any great extent.
The pickups are twin humbuckers with independant volume controls. They have a full, fat sound and for a passive bass the output is pretty high. The controls themselves are good quality and allow a fair amount of diversity - take out the bridge pickup and you're almost in P-bass territory. There's no crackle from the pots and the jack is solid as well. The black tuners keep the thing in tune whatever you do to it and the bridge is a solid, chunky piece of kit. The only finish is vintage sunburst with a white scratchplate but it looks good, is well finished and you'd never know it was a two piece body. The fingerboard is rosewood, some I have seen have quite badly pitted fingerboards but mine is okay, oiling it is a good idea. The frets are well fitted, although the shape of the body makes it tricky to play the top frets, especially if it's slung low (and it should be...)

Okay, it isn't a Gibbo, but you'd have to look hard to notice. For a rock bassist it's a great instrument if you can't afford the real thing, fatter sounding than any passive bass I've ever played. That said, I wouldn't recommend the bass to a beginner as it's off-balance, has a very long scale length and the thing is so bloody big (long arms are a must).
The look of the guitar limits interest to certain genres of music which is a pity, it's versatile enough to play all sorts of styles on. Really, this is an ideal piece of kit for an accomplished bassist on a budget.