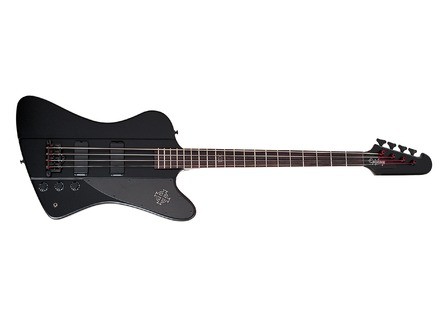 metalikman1's review (This content has been automatically translated from French)

The handle is quite nice despite its large longueur.L Access in acute is quite difficult because the low pitches down but not sy habitue.Basse trs heavy enough comfortable to wear
EXCELLENT sound ... personally I adore, especially in the mediator and slap

It's totally for me, I play a Fender Rumble 100, is not to say, c is effective
The sound that I use is somewhat typical love Nirvana so j
Obviously this bass that goes to Rock to Jazz

J has just had the day in and am glad, despite the default ptits (bite the nose for example)
J love this bass simply a unique design for a unique sound
Even with experience j REFER choice
The report price is trs good quality, 490 (french prices) for a good quality trs
Did you find this review helpful?yesno
»

cprail's review (This content has been automatically translated from French)

Epiphone Goth Thunderbird-IV
5
Same thing as the Thunderbird IV Sunburst version of the Epiphone diffrence that the body is alder but not in Mahogany (which is saying let's face it).

When compared with the sunburst Epiphone Thunderbird IV must IMMEDIATE put a black finish of the bass is not "glacquot, and varnish but a (beautiful) matte black. The diff ence is important for me who is a clear preferences for the varnish, finally, it's no big deal.
It is much lighter than the tbird but remains dsquilibre Sunburst. As explained in very easy to fix (a so should not count in the calculation must be so lazy not to find solutions).

In terms of the trs is fat. She rings the Manir the other Epiphone, its a little muddy, close to the original Gibson but with less DEFINITIONS (the diffrence is not worth 1500 euros though).
If this is what research is all done perfect. If we look slapper on board (anything is a not so bad as they say, simply refine his technique and not esprer miracles).

Test store dernirement I possde the Sunburst for a few months now. I t surprised. If this n'tait varnish (absent) and the pickguard (which does not include the Thunderbird logo and it is a shame) I made this version without hsiter Gothic.

In the present situation, if I hsiter between the two I think I'd flip a coin.

As the value of the low in comparison with others of the same low price: it's a great value. Sincrement, it is far end of the handle and fast gibson original, it is not the sound, but you have to admit that she has teeth that low. A style of boot, a sound that shook the walls as it should but who can also get unique sounds and refined, trs acceptable price ($ 450 Canadian) and, in this version Goth, a body mahogany, these are arguments that convince me russia.
Did you find this review helpful?yesno
»

brekersboy's review (This content has been automatically translated from French)

Personally it suits me very well even with a very fat and round that is easily settled on the other hand if it is set pa comprent we do not have to play that one but its a very nice anyway, and it responds very well slap

I just buy it but I was anounce a waiting 9 months!! May I finally got to the end of five days. its price was in dessou anounce the price (425 €). I do not regret having bought it in against it was difficult to find a bag for a good nose Taile always exceeds
Did you find this review helpful?yesno
»

bassman01's review (This content has been automatically translated from French)

The neck is thick and access to acute, difficult as the head pique "the nose" but only when playing standing.
form, I love it. I think it can change a low form a "round". it is a bit heavy (few grams) but it's not a problem.The sound is very fat (normal for Thunderbird

). You can get different sounds by playing a little different on the 3 potards.c is a very low type ROCK! is no such raegae with it.

It is perfect for my style of music that is also very rock.Je used with an amp Kuston KBA30 (to play at home) and a Fender Rumble 100 (concert and to repeat) and a Korg multi-effects like AX10B. The Thunderbird will "go very well with the AX10B and fender rumble 100.je higher repeat myself: it's a bold (see System of a Down, for example, who also plays on a thunderbird but Gibson) . is low for a game because the friction on the finger of the tab on the strings along very loud when they come out of the amp. the slap is not very good from this bass, I use my ibanez is more suitable because of TB, you'd rather a kind of "toutouille of anything but good ca is personal.

I use this gem since April 2007 (about 8 months) and I love the slightly X halfway between the basic shape and the Explorer, which it is a little tro X (lol). I also like the his fat fingers when playing and versatility (only in different style ROCK). oh yes and also the color of the black non vernie.avant bought, I spent the day in Cologne in MusicStore try decades and that is the me most attire.le price / quality ratio is EXELLENT. With experience, I do not know if I would do this choice "without hesitation" but would be part of my hesitation final a blow!

Did you find this review helpful?yesno
»
Read the 5 user reviews on the Epiphone Goth Thunderbird-IV »