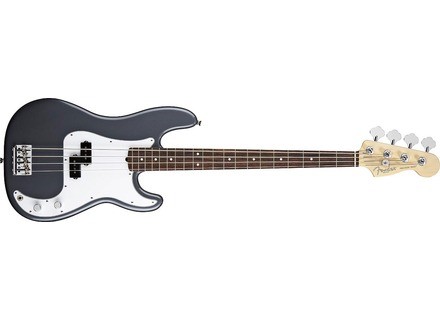 Fender American Standard Precision Bass [2008-2012]
5
This is a 2008 Precision Bass by Fender. This is after Fender did the S1 switching (the switch built inside the volume pot which was a series parallel mod to the pickup wiring.

The 2008 model came with a new high mass bridge and the limited Candy Cola finish. Candy Cola is similar but just a shade or two darker than Candy Apple Red.

I went to a local music shop to try out the new Hartke Hydrive bass amps and told the salesman 'Get me a P-bass' I loved the sound so much I picked up the amp and the bass! I believe I paid $1000 for the bass with an SKB rectangular case.

The bass itself feels light. Not cheap light, just a comfortable, 'Hey I think I can play this all night' light.

The neck is new, but I don't really think it is any better or worse than the older ones.

No improvements needed. The Precision bass is a time tested masterpiece.

Fender really paid attention to detail with the neck. The fretting is really nice. The neck feels really smooth and has an almost worn in feel, but no it isn't one of those power sander relic basses.

I also hadn't mentioned elsewhere Fender used new Hipshot tuners for this model. They are a bit lighter in weight and take up less space on the headstock.

A bass I can't put down. It thumps and plays great up and down the entire neck.

Fender American Standard Precision Bass [2008-2012]
4
I have always been looking for a bass with a deep dark low sound, a comfortable neck and oodles of style. I bought the ESP f155dx.Bought the Arctic White with Rosewood. Its a Fender Precision for gods sake! Added Seymour Duncan Quarter Pounders and a awesome II Bridge, and this turns into an out and out monster!

I had to special order it because the store didnt have it in stock. So it finally came and I pulled it out of the box hoping to play it. But the bass was literally unplayable the setup was so bad. The action was so low that the strings were dead the whole way up the fret board. Now I doubt climate change could affect the bass that much. But after a good setup the bass is awesome. Plays great, sounds great, and looks awesome. What else can you ask for? Besides better quality control. The guy who setup the bass said he's never seen a guitar or bass so bad right out of the box, and that upset me a lot.

Other than looking at the head stock, I'm not sure how to tell as to whether this is the Mexican made Fender or not... The Mexican Fender Precision I've experienced has Some of the best sounding pickups I've heard; suitable for recording with almost no EQ at all, which is unusual for stock pickups. Playability of the neck and fret intonation are excellent. Overall, this instruments offers a wonderful sounding combination of pickups and choice of wood. Though some versions of the Fender Precision may have more robust hardware, the tonal color along with excellent playability make this bass a great axe. I don't know how much of these qualities are up to chance, whether all recent Mexican Precisions are up to these standards, but it's definitely worth a try! Enjoy

Fender American Standard Precision Bass [2008-2012]
5
I don't think anything says rock 'n roll when it comes to bass guitars as much is the Fender American standard P – bass. This is such an iconic and brilliantly built guitar that is led to it being one of the most highly used bass guitars for any style of music. This guitar compared to the jazz bass from Fender has a little bit different tone and feel. This is more of a rock tone where as the jazz bass is probably a little bit more smoother tone. Both are good tones for most music and pretty much all rock music and pop music.


It features 20 frets and it has also a volume and tone control knob. The pick ups are slightly off centered so they give it a unique look and feel. The paint job has a nice sunburst paint job which is very gorgeous and extremely beautiful in my opinion. I also like the pick guard that matches this guitar very well. Looks like a vintage guitar straight out of the 60s. This is a four string bass and that is pretty much about it as far as features.


This is a kind a guitar that is going to be extremely versatile for pretty much every style of music. I can't honestly think of any style of music that this bass guitar would not work in. It is extremely versatile and the tone is very warm and blossoming. It has great overtones that really fill up the sonic spectrum and bring out the low end bass tones. It's a guitar that will allow the bass guitarist to bring in their own natural style of playing.


You can find these guitars pretty easily as you can find a gas station in a major city. They're very popular and the market is very saturated with these guitars. You can find one new or even used and it will not take you very long. They're available online and pretty much any music retailer in the world. It's a great starting point if you're learning the bass and if you can afford one I recommend buying one.
Did you find this review helpful?yesno
»

Fender American Standard Precision Bass [2008-2012]
5
American-made (I still name the girl who checked me - Jessica -)
massive bridge, comfortable handle, superb finish.
Fender they changed their technical patent, thinner for her, I could not check the difference with the older models. at least for this model it does.
The pickups are original with Alnico magnets.

It is a low light for me because before I played on a Jazz Bass V Delux which weighed its weight.
it is very well balanced, treble, are accessible 20 cases it is more than enough, do not forget that this is a low to rock this is not to make solos Jeff Berlin.
It was THE rock bass sound that is played with fingers or a pick, that's great. not need to tweak the knobs to get the sound, otherwise just volume and tone that's enough, if you want equalizer ago what to preamp.

I plugged in a lot of amp in all ranges. Transistor (sounds), hybrid (sounds) and full light (it cartonne) home I plugged into a Line 6 Pod connected to my PC even plugged it on a stereo system, I'm still amazed sound.
For concerts / rpeter I finally bought me the stack need for this bass Ampeg SVT CL and U.S. 810, too bad for the back, but it's beautiful.

I use it for 5 years I can not play anything else, it's been years that I was dreaming. I had seen and especially once heard a guy playing on a precision in a small room and it was the trigger.
I play mostly rock, fingers and pick, sometimes funk / disco, whenever it is a treat to my ears. I customized my bass way 62 'with cover easel, finger rest and micro cache, it gives it a vintage look fabulous.
I part with it for anything. It is not to say, but all rock bassists and even country use it is to say.

Did you find this review helpful?yesno
»
Read the 8 user reviews on the Fender American Standard Precision Bass [2008-2012] »