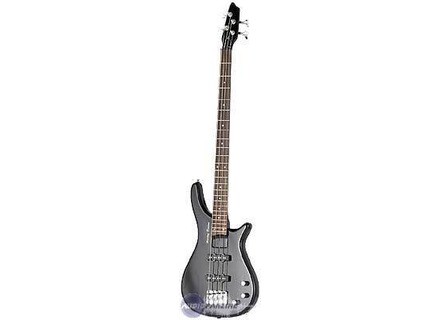 Da_gratteux's review (This content has been automatically translated from French)

Harley Benton B-200
4
Made in China, it is written on a small sticker, but the price we would have suspected ...
24 frets, 2 micros Jazz Bass type
2 volumes, one tone, no switch, cut the microphone volume on what we do not want to play ...
The handle is nice, wide enough for a 4 string I think
The body is basswood, maple neck and rosewood key

The handle is very nice, very good finishes for 130 euros, all is well, and it emanates a feeling of solidity of the instrument, the bridge is clumsy, the varnish well finished, the frets are well polished, not a hair exceeds the price was bluffing ...
The interface is nice, all is light enough, it must be seated if the horn is placed below may be too small, standing, the foot.
The key is not finished with great location, but it's really small and have a good look ... It is nevertheless pleasant to the touch.

A vacuum it sounds good, that is round, warm, you feel the beast vibrate, sustain, looks not too bad ... I have not yet connected, the amp is coming soon, I promise I will notice a day!

(Yes, I know "but what is the gus who advises on a low that not even plugged in?")

I tried it on a v-amp guitar on the "tube preamp" with the gain to 0, the headphone, well ... it has a bass sound, I shall not express it otherwise ... the sound is round, and the sustain is good.
Added 17/02/06: while there, I bought a small Laney HCM 15 B, a lil 15 watt bass that sounds great all things considered ... slap the spring well, it's round, the mediums are well defined, the sound is very friendly, good a priori that the instrument gives a vacuum plugged seen confirmed, I kept my note of 7 / 10

I received it today, my first bass, I wanted something cheap and not too bad, I was not disappointed ... I insist on the finish that is exceptional oO 'really nothing to report!
A 130 euros is given, I redeem the same again!

rhcpfan's review (This content has been automatically translated from French)

The bass is rather enjoyable, although the handle is plutt wide. The body is also enjoyable, especially since this low n'esrt excesivement not heavy. The BMOL is the quality of manufacture. When he arrives m'tais I said that it looked solid ...
But when I wanted to settle the action, the curvature of the handle and make rglages I glimpse the components of taient mdiocre quality. The screws broke blowing the warranty and when I disassemble my round I found a small slip of paper meant to straighten it. The original rglage my bass silent 7mm 12th fret, the action RULES at the bridge (bridges) to a minimum!

I dsormais vaccine against the purchase of instrument in VPC because any Manir the diffrence in price with the local shops is equivalent to the price of reference for the Service.

N'tait sound not too bad round but rather a lack of precision should be noted all the same. The rglages are versatile enough and have not found sounds slammin too.

I had been four months. I did not ssay of other models as low as guitarist I recherchaisune CHRE not ... But I found it better than a Cort Action Bass of friends.
INTERESTED price, the quality as it is default.
More buying VPC because as mentioned in any Manir the diffrence in price with the local shops is equivalent to the reference price for the service and one at least has the luxury of what the SSAI 'on achte.

antodiabolik's review (This content has been automatically translated from French)

Easy to use nothing to say

Deu then the highest degree, good so far everything was fine but after a week I do not know why the sound of two Premire box is horrible, I've never understood why I tried several type of rope but nothing to the sound of ay 2 Premire box or get out of each string sounds the same as box 3 or it leave a chtoing!! I am frankly horrible. I play with an amp harley benton mdiocre so it can not keep up if you put a distortion pedals.

- I use it for 4 months at his dpart went a little prs but I make rept with my band and that's the problem completely mdiocre ropes ruins everything sound, notes on all the strings of the boxes 1 and 2 are impossible to do
-I totally deprecated the

VvSurLeRiddim's review (This content has been automatically translated from French)

Note that I had little problems: first, one of the screw fasteners for the strap was done by embedding the trunk of small fragments of wood. It does not see but suddenly we could not secure it because the hole being left too it was no longer valid. So I had to plug the hole with putty hard, but no problem since it reflects the quality ...
Moreover, the two knobs for adjusting the microphones were passed away at about the same time. I did change, I pulled for thirty euros if I remember correctly. Not dramatic either but again it gives an idea of the quality components used.
Finally, I do not know if it comes from the pickups, the rest of the electronics or shielding (or lack of armor?) But there's easily the breath: the bass is very sensitive to electro magnetic interference. That does not mean too much on a big amp, but through headphones or recording yes! For the record I would say that it is unacceptable: do not expect to save even just a mock-quality drinking with this bass. In contrast to play live or repeat it to pass. Perhaps a change of pickups see all the electronics and / or re-screening could improve things but hey, given the overall quality not sure it's worth in the coup.

The neck is quite nice. Access to treble is good.

In contrast the lower horn is too short, which makes it difficult to use while sitting low resting on the thigh as it does not take much.

Second usability problem: standing with a strap, balance unsatisfactory gives him an unfortunate tendency to pitch down.

When easily get a good sound ... Yeah, well ... sound but not exceptional for this price should not ask too much either.

I mainly play rock band but in my home a little bit of everything.
The sound of this bass is pretty versatile, but does not break bricks in any style.
At first I was playing on the amp Harley Benton HB-40B which is a combo 1 * 10 "40W I had purchased together and which is pure crap. I realized that trying to lower real good big amps that it changed everything, and finally it was not so rotten. I have since invested in a big amp Ashdown and is much better.
Also note that the strings supplied backgrounds are really zero in *** ch when I changed to the GHS it made a difference as sacred.

In the end with good strings and a good amp sound level it goes ... nothing transcendent good either but for that price it's really honest.

I actually used (ie daily or almost) for 2 years.
I play in groups, and it is (for now) my only bass. So I use in rehearsals, in concerts, and to train all alone at home.
I have not tried other models before buying, this is my first bass.

The feature I like + the price
the -: not great sound, finish and quality components not really top

- The value for money? Well the quality is just passable, but the price is ridiculous, so the final report is pretty good, see good.

- Knowing what you know now, would you make the same choice?
Yes and no: for a first bass, it's more than enough to get your feet wet without breaking the bank when we started, so I do not regret having started with that. But now that I progressed I became more demanding and I think to buy something much better for the future.
Did you find this review helpful?yesno
»