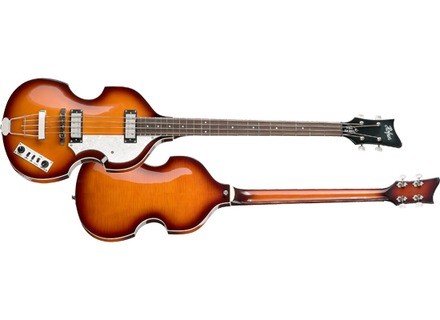 Hofner Guitars Ignition Bass
1
Product reserved for beginner and Beatles fan, but big problem with the circuit board for the selection of microphones and microphones oxidize a breakneck speed ...

In short, I highly advise against ...
Did you find this review helpful?yesno
»

Hofner Guitars Ignition Bass
5
Made in Indonesia, not in China, which is enough for me. The features can be read in previous reviews. Overall, it looks and feels nice. No rough edges on the wood, no glue drips or any other such blunders that you usually expect on an instrument at this price point. In short, it has that German look.

Short and adjustable neck. When you are used to classic basses, it's a bit surprising because the bearings are a bit different, but after a while switching back the other way around is disturbing. It's easy to get used to its ergonomic design.
In terms of weight, it's so light that it's a bit disconcerting.
I had a Rick 4001 and I had always the impression of lugging around a concrete block.

The sound is what I've been looking for 25 years.
Although forking out 2000 euros isn't that alluring.
It's round, warm and without too much sustain. I took up the pick again, yes, I did, don't laugh. That's the way it sounds best!
I play an old Roland Cube 100 or a 350W Fender Bassman TV (it's not mine, I don't have that kind of money).
Or connected directly to the console, for recording, with several plug-ins.
Its THE sound I wanted and now I have it. What should I complain about?
What about for slap? Well, no, it's to play bass, you know, that round and deep sound you can hear on rock and roll and many pop songs.

I've been playing it since February 2012. I put my other bass aside and now this one has become my favorite one.
First of all because it's beautiful.
And because, frankly speaking, for this price, I keep saying myself that in the worst case scenario, I could hang it on the wall as decoration, but no, it's incredibly easy to play and it sounds fine.
I love it. I often find myself just playing it softly, unplugged, caressing it. It's addictive.
The original strings are useless. I replaced them with Höfner flatwound and there's no comparison. They are very expensive, but they are really worth it.
I also changed the pots, to replace the hideous original black ones. And I removed the pickguard, unfortunately the small screw holes are visible. Although you can't see them 6ft away.
The tuners seem a bit cheap and they don't inspire much confidence. That said, the guitar stays in tune, but I plan to replace them with some Höfner, even if I have to do a bit of drilling.
It's obviously a must have for Beatles fans. It's a looker onstage. I know what I'm talking about: When I play guitar I use a Rickenbacker 330 and a 350, and it's similar, the nods are unmistakable.
And the sound...
Sigh.
I'll keep it. In a moment of madness, I'd buy another one, in black. To have a couple.
Just take a look at the pictures, guys.
Did you find this review helpful?yesno
»

Excellent value for money.
Good bass to practice at home
Did you find this review helpful?yesno
»

Hofner Guitars Ignition Bass
4
Black Beatles bass.
Manufactured in Asia, which means bad quality components assembled with care: The finish is good but you only get your money's worth, nothing more, the wood seems to be plywood, the tuners are really cheap.
I only got it recently and the jack came off already.
I tightened the neck and adjusted the height of the strings, with care not to go too hard on it, and the result is okay.

I read all reviews before buying this bass. They all said it had a pleasant and small neck.
Which is true, but be careful, when I say small it's really SMALL. I might have big hands (my other bass has a fat neck), but this bass feels more like a banjo! The strings are too close to each other, my fingers don't fit between them, so I play with my fingertips.

It has lots of controls but, personally, I only use one position and simply vary more or less the mids and bass controls.
It's exactly what I was expecting: It's not a double bass but it really sounds like wood! It has a truly nice and characteristic sound, although it may sound like cardboard guitar if you are too demanding. I like it a lot, but to get it sound really pro, you need a compressor, EQ, and what not.
I use it to write songs in my home studio and I could also use it for gigs, but more like a gag than a real instrument.

I've had it for several months and I'm entirely satisfied with it. I got this bass to have a different sound and it didn't disappoint me.
To me, it's a great toy, I love to play with it, it's light as a feather, you can take it anywhere with you and, in terms of looks, it rocks!

It doesn't like sound much unplugged, but you can still hear it and, since I have it lying around in the living room, I often just pick it up and start playing...and as a result I'm playing much more now than before!
It's a good value for money, since it doesn't cost much but you can have fun with it.
It's okay as a secondary bass, but definitely not as your main bass.
Otherwise, why would there be another version that costs ten times as much?
Did you find this review helpful?yesno
»
Read the 11 user reviews on the Hofner Guitars Ignition Bass »