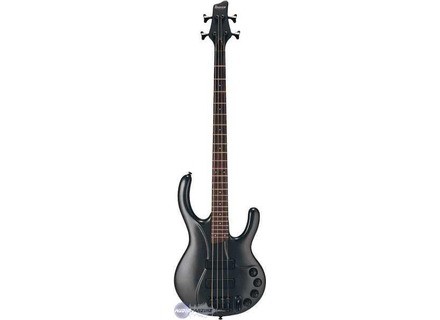 EDC700, 4-string bass guitar from Ibanez in the Ergodyne series.

Ibanez EDC700
5
I have been playing bass since I was 15 and am now 30. I have played in a few bands, recorded a demo, and have played many live shows all over the Boston area. I mostly like metal, but I'm good with anything.

I bought this bass at Guitar Center In Peabody Massachusetts. I traded in a 5 string Ibanez Soundgear, and a Peavy 100W amp and paid about 100.

It is THE most amazing bass I've ever played. It has the most amazing feel, it is completely sculpted to fit your body, and scooped out in the front so you can get under the strings very easily. It is also the best sounding bass I've owned, and I've gone through 6 trying to find this gem. Aesthetically, it's simply gorgeous and is very rugged. I have had no issues with scratching, denting, or anything of the sort. It looks as though I bought it yesterday.

There is not one thing I dislike about this bass. I have to tune it less than I've ever had to with my others, and everything is very very solid.

It is a molded piece, not carved, so it's very unique. It's balanced perfectly, light, is the perfect length and demands attention.

If anyone is in the market for a new bass, you really should do yourself a favor and check this one out. It really is an amazing bass which has made me look at construction completely differently.

This bass is very light for its size. It fits the contours of your body well, the neck is thin and plays well. The eq is infinately adjustable.

The nut on the 1/4" input is always loose. Some areas on neck lack sustain.

Construction is overall excelent. I have had this guitar for over a year and it still looks and plays like new. Never had any problems.

I think this is a good intermideate instrument. The overall quality is good and you cant beat the looks.

Ibanez EDC700
2
it was a gift bought for me from guitar center for $630 brand new i think.

i really dont like anything about this bass except for the color.

this bass is not reliable what so ever. ive had the get the intonation, action, and ESPECIALLY the truss set up more times than i can remember. i have put more money into this bass than it is even remotely worth to me. it stays in tune but the neck in more flexable than a rubberband. it might be the luthite or whatever its made out of, but i have to get it all set up about every 6 months or else it starts buzzing all over the neck to the point where its not even playable. the worst part is that i use this bass the least out of my collection and its mostly in the case. there are 2 knobs on this bass which are stacked so really you have 4 knobs so you can dial into certain hard to find tones more easily or something. anyway this is such a stupid design in my opinion and both of these knobs, or should i say all four have broken multiple times. i dont know if i got a fucked up bass with problems straight from the factory or what, but this bass SUCKS!

the construction of this bass is suposed to fit your body with the carved out back and the 2 cutaways that look like dildo's. the neck has 6 bolts which is a goodthing i think, maybe one of the only good things besides the color which is a black pearl color. still, none of this comp

does not even come close to comparing with a fender, musicman, or wal. my advise is to buy a bass originally designed by leo fender, carl thompson, or waller and you cant go wrong. this is not the worst bass ive played so i cant give it a 1, but still, this bass sucks. email me if you would like to buy it.

Ibanez EDC700
5
I bought my bass at the local music shop after bussing tables at a crummy pizza joint all summer long. I had saved my money with the intention to by a five string, but after trying the Ergodyne I fell in love. It was used so I got it for around $350-400; it had a scratch on the neck near the twelfth fret. It was one of the easiest playing basses in the shop. I was impressed with the onboard eq... because at the time I was playing out of a weak little practice amp, using a P-bass copy. I bought the Ergodyne because it was such a good deal... I'd been on the Ibanez website looking around and I never thought I would ever own a bass like that. It was kind of a cranberry color which I had never seen on the site, so I was pleased with my find.

I really like the onboard eq, and the blend knob (for selecting pickups). I can dial in any tone I want. I also like the two octave range on the fretboard. The sound is great too, no matter what you're playing through.
I like the color, but I don't think Ibanez makes too many of these basses like mine. I wish they would make a neck through bass, I mean, Luthite is supposed to be easier to make basses out of, because you can mold them. The bass is also quite a nice looking bass. It's got a thumb rest molded into the body, and the area under the strings is scooped out for slapping and popping.

I've read that there is a sustain problem on the D string, 9th fret. It's true. It's only a minor problem though. I play mostly slap so I'm only popping that note for a few milliseconds. The passive pickups are a lot quieter than other pickups on other basses. And the way the pickups look, I don't think you can change them without screwing up the bass. Since the bass is made of Luthite, it has a kind of smell to it, like some kind of solvent or gasoline. It's not that powerful and it fades after you break the bass in.

The bass is just amazing. I love the way it's built. The neck is bolted on, and held there with six big screws, as opposed to the measly four like most basses. The knobs are placed on a raised section, so it's easy to adjust tone on the fly. The bridge is setup for quick string changes, you don't have to pull the string through the bridge so the whole process is a breeze. The neck is fast, and the finish is nice and shiny.

This bass is great, a real players bass. If I could find another somewhere I'd probably buy it. Everybody who sees it or plays it thinks it's the coolest bass ever. I'd have to agree.

This review was originally published on http://www.musicgearreview.com
Did you find this review helpful?yesno
»
Read the 13 user reviews on the Ibanez EDC700 »