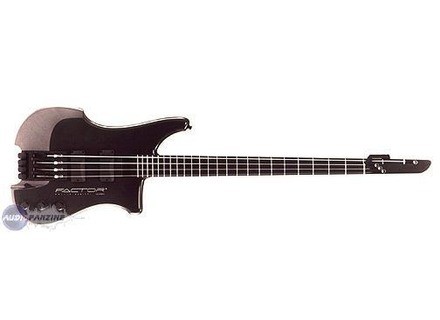 Kubicki FACTOR
4
Phillip Kubicki is a visionary instrument maker. He first began with Fender in the mid 60's researching and developing new designs for acoustic and electric guitars.
He left Fender in the early 70's and began producing his own instruments. In 1983, he introduced the Factor 4 bass, driven by a desire to produce unique, inspiring instruments. It was soon endorsed by Stu Hamm, and Vail Johnson, and demand for the instrument skyrockte, so much so that Kubicki could not keep up with the orders, and consequently signed a licensing production deal with Fender. When the Fender contract expired, Kubicki resumed manufacturing them in his own capacity for special orders.

The Factor 4 bass has a 32 piece rotary cut veneer maple neck, ebony fretboard with 26 jumbo frets, and an eastern soft maple body. All of the hardware and electronics are designed specifically by and for Kubicki, including the pickups, which are a hybrid active/passive design. The stringing and tuning system for the Factor is rather unique, and employs a design where the string ball end, typically anchored at the body, are seated at the headstock, and each string travels over its own saddle slot and is wound around a ratcheting gear mounted in the body. The string is then fine tuned with a threaded post.

What's more, the Factor allows the E string to be dropped to D automatically by modifying the scale length only for that string, giving it two more frets and its own small nut section separate from the other strings. A spring-loaded bar clamps the string at the 2nd fret to produce an open E note, functioning much like a built-in capo that only operates on that string. This makes going from standard tuning to open D tuning and back as easy and quick as flipping or releasing the lever.

Access to the upper frets is generous, and proper string action makes playing in the upper registers enjoyable. Truss rod adjustment is conveniently located in the end of the headstock, and can be adjusted with a medium-sized flathead screwdriver.

The Factor bass comes with either a 4-Way or 6-way selector switch depending on the model and when it was made. This particular model sports the 4-way switch.

This is where things get interesting. The Kubicki factor bass features a hybrid active/passive pickup system, that allows you to switch between two active modes and one passive mode. For controls, it includes a stacked EQ knob to control treble and bass response, and a stacked knob that controls Volume and Pan, which controls the balance between the neck and bridge pickup output. The active circuit runs on either one 9v battery, or two 9v batteries for 18v operation.

Despite its maple body and neck, the Factor is capable of warm, soft tones, but it truly excels in the high frequency spank and attack. The pickups are punchy and powerful in active mode, and passive mode offers a softer, more traditional subdued tone for blues and jazz runs.

The Kubicki Factor 4 bass is a truly unique instrument, even 30 years after its conception. No other bass employs quite the same set of features or technology, and for that reason, the Kubicki has a sound and a feel that's tremendously difficult to replicate with another bass.

Two design flaws of the Kubicki Factor bass are that the Switchcraft 125B output jack is positioned dangerously close to the preamp circuit board, and in some cases the solder terminals literally touch the board. With much jostling around, this can lead to shorts in the circuit, and as a result intermittent signal and audible pops.

The other flaw lies in the drop D lever. Since it's designed to hold the string at the 2nd fret (like a capo) to achieve the open E note, over a relatively short amount of time the string begins to dig into the fret, and intonation can be compromised and string buzzing can occur.


New custom shop Kubicki models sell for $2,000-4,000, whereas the original Factor models are difficult to find and fetch not much less than that.

If you come across an older Factor bass, I highly recommend buying it. If not, there's always the Kubicki custom shop. You can even get your new Factor bass in your choice of exotic veneer.

vspector's review (This content has been automatically translated from French)

Kubicki FACTOR
5
Here, all that is really lon in a legal instrument for demanding pro. At a price of 2795 USD dpart Factory (May 2005 prices on www.Kubicki.com site) for the basic version, it would be sen doubt. But some models o the benefit of their legends to show such rates, here we are in lefficacit high technology and modernism in the service of his. It's really the bass luthier.

The handle.
Its a round laminated (made up of thin strips of wood even staggered to avoid any game long term). It is superfine and trs enjoyable with this little detune the top of the slab that allows Mi jusquau R dsaccorder grave without the rope.
Mics: the Humbucking home, ultra versatile and powerful. 3 active positions, two positions that passive lon trs quickly forgotten, a stand-by.
The tailpiece: Modl home, place the bottom of linstrument, a system that keeps laccordage still intact, whatever the temprature or hours pass play. You can almost throw your tuner.
Changing strings is a bit physical, but once in place, it is said, was not moving.

The ergonomics are good as trs sitting and standing, despite its weight

I play in a cover band rock pop reggae, and this is low nickel in all styles. I often play on my amp, a Hartke 120, but on the other amps I've encountered have always been sound. I tested it in the studio with a DI, and ingnieur there is almost no input correction.

I have five years now. I had to be engaged for the first time in a cover band, I started looking for something more versatile than my old bass. I stumbled upon it in a store. Ds the time when I put the finger on it, a t hard to remove. Sure, it's an instrument a bit expensive buy it, but as they say in the Tontons "It's not something for everyone, the quality is, the price is forgotten!" De over the look between traditional and modern, albeit a bit 80s, in fact the bass for idalie quon by filing notices you and especially the sound.

See all 16 photos of Kubicki FACTOR »