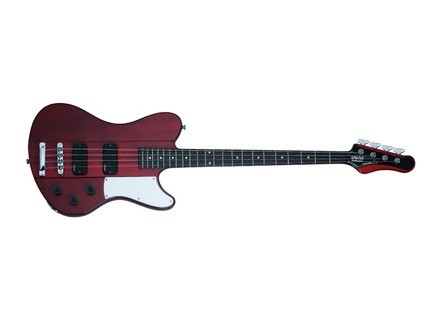 All user reviews for the Schecter Ultra Bass

Average Score:3.0(3/5 based on 1 review)
Audience: Anyone Value For Money : Correct
Not satisfied with those reviews?
Our members also liked:
Editorial review
Users reviews

1 photo
- Which amps or effects do you use this bass with ?
Pedalboard with a Korg Pitchblack, Carl Martin Quattro (Chorus), Isp Technologies Decimator and Boss BF-3 Flanger into a Markbass CMD 102P

- For which kind of music/playing style ?
In our band's original songs, my style is close to those of Cure or New Orders, I first wanted to buy the Simon Gallup signature model but I considered it too expensive for features similar to a Classic's.
Regarding covers, we play 1970s to 2000s rock but I haven't used it with a band yet, I think it'll be less versatile than my Guild B301 which sounds quite neutral.

- What do you think of the instrument's wood and construction quality, electronics and finish?
The guitar's finish is fine, it's a well-balanced instrument compared with a Thunderbird which tends to nose-dive. The pickups are not so punchy (compared with my Guild) and tend to distort rather easily.
The BIG disappointment is the knobs which are plain useless from 0 to 8, the shopkeeper told me it was a question of speed (I'm not really convinced). In a way it suits me as it allows to quickly get from a pickup to the other, but I would have preferred a switch. The tone knob is just the same, all in all I believe these are just low-grade parts...

- Does the bass stay in tune?
Strangely, it does, I didn't expect it to behave that good, no intonation difference at the 12th fret.

- Do its neck, fingerboard and shape suit your playing style?
It suits me perfectly for our original songs and I still have to wait to use in on cover songs, but I feel it's not going to be easy, the neck is really thin near the head.

- Do the sounds suit you in the different pickup combinations?
The sounds are really near those of a Gibson Thunderbird but it's quite logical as this model was originally made for Simon Gallup who essentially played on a Thunderbird (but since Schecter has endorsed The Cure for a few years now, the bass player was the only one left still without a signature instrument...).

Used together, the pickups sound really good, the neck pickup alone is really good (it sounds as if you were switching from left to right with the mids, the position of your wrist between the bridge and neck will influence the tone too and the distance is important and appreciable. The neck pickup alone will take more time for me to appreciate it, as of now I feel like all the lows are getting lost.

- Is the sound well-balanced ?
The low E string sounds different from all the other strings.

- What are the instrument's pros and cons ?
THE PROS = its shape, weight, balance, very straight neck, and sound.
THE CONS = the pickups that lack accuracy, he cheap knobs, the price.
I got it for €700 and for that price it's OK, but for its MSRP of €1,000 it's a bit expensive, let alone the (way too costly) €1,300 signature model...
Did you find this review helpful?yesno
Cookies help us improve performance, enhance user experience and deliver our services. By using our services, you agree to our use of cookies. Find out more.