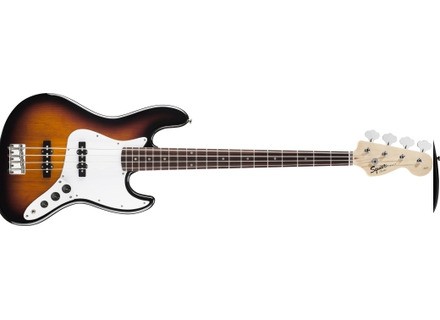 Squier Affinity Jazz Bass
4
I bought this bass at MusiciansFriend for $199.00. I bought this unit because I was wanting to try out a new bass.

I like the construction of the bass, the feel of the strings, and the warmth of the tone.

I don't really like the strap pins, they're way to big.

The quality is just what you would expect from Fender, only cheaper!

If you're an intermediate or beginner bass player, get this one!

Squier Affinity Jazz Bass
4
I bought this bass from a chain store for about $200. A buddy recommended a Jazz style bass for the type of music I play. As soon as I tried it out I knew why he recommended it to me.

It's fairly light. Easy playabilaty. You can get a great variation of sound and tone. It's a much cheaper version of a Fender Jazz but from my experience it sounds just as nice.

Theres always an area on the bass with notes that ring. I tried extremely hard to adjust my action but you just have to adjust it so the area that rings is somewhere you dont play on much. I've been told this is a problem with most fender/squier products but the area isnt too large.

The bass is extremely well put together.

I think anyone whos thinking about picking up a bass should definitly get a Squier Jazz. It's a much cheaper version of the Fender Jazz and I think it sounds just as nice. I think the good outweighs the bad. It's one of those basses that you can buy anytime and once you get into it you will never let this one go. It's a great buy and you can usually find them fairly cheap.

ThibaultEsteve's review (This content has been automatically translated from French)

Squier Affinity Jazz Bass
5
This pretty low in Agathis (cousin of mahogany Jecrois) is made Indonsie but the same design (and especially the hyper-heavy weight ...)
Fender Jazz Bass. On this point, nothing to say she is beautiful and makes you want to tter!

It does that only 20 frets, which is relatively low compared to other low montes of 22 or 24 frets.

The pickups are two in number. 2 single-coil Jazz Bass that sound! And yes they sound damned good these cons (Bobin by Fender, guys ...). The only thing I do not like is the micro center that I find too bveux. The bridge pickup, it is irrprochable for funk. It seems even a MusicMan at her! Yes, yes, I swear!

The English Channel is the best part of the instrument end, enjoyable. But the effects, it is better a Precision (the one I really do not like the handle)

The handle, as I said, is great but it is quite enjoyable Lourdeaux too.
CHAC is the acute trs ais thanks to the double pan. The body shape is very nice but for the time she nime n'chappe not the Fender RULES: IT IS TOO HEAVY TRUCK IS A DUMP!

This Squier Jolie has an advantage despite its name: The two large microphones allow sound, the finger mdiator, rock to jazz with some blues.

The CONTRL DIFFERENT allow you to change sounds. But a switch would still be useful t

Rpeter on my amp, a Hartke 60 Watts, the sound level is quite heavy bass and treble and mdiums out well too. Woe! The attacks are to mdiator surclaquantes ...

Scne on my amp, Hartke VX410 cabinet and a head of 100 W, the sound is nickel and chrome brilliantissime!

This will be ending for a year I have and I'm not. To say I hsit for 3 hours on it the one Jazz Bass Mexico and a Squier P Bass Special. The sounds are out just great. The three parliaments I would change would be the bridge, the pickups and mcaniques.

In fact, if I made this choice because I wanted to end a handle, not bulky and vintage sounds pretty cheap. (- 400 Euros)

If I had to redo this choice? No, I would have headed for the Mexican Fender Japan Used

Squier Affinity Jazz Bass
4
Nothing spcial say about this CHARACTERISTICS Low reprand that all points of "the" classic Fender Jazz Bass ... less well!

The violin is correct, the body is heavy and sounds enjoyable empty (non-amplified. Mchaniques The trs prcises are not, but it is not catastrophic. The major weakness for me c is the lctronique. potentiometers too soft, a jack base, and microphones with much dchet.

Sounds Jazz Bass in smaller, but not bad. The sound is round, no dynamics. More enjoyable to play on an ampeg fingers, as on a Fender mdiator.

It's been over 10 years I use this bass, the violin has not changed and is enjoyable to play trs. I changed the two microphones (by Dimarzzio) after one year. I am trying to change all the connections (cable, solder, pots, record). Without being exceptional, the bass is a good compromise trs. I bought 1800F, and I do not spare for nothing. It adsormais "my sound" and it is not empty to find an instrument that we match. It does not replace a "real" Jazz Bass, but it c'en approach, free those who can afford to buy one later.
Did you find this review helpful?yesno
»
Read the 13 user reviews on the Squier Affinity Jazz Bass »