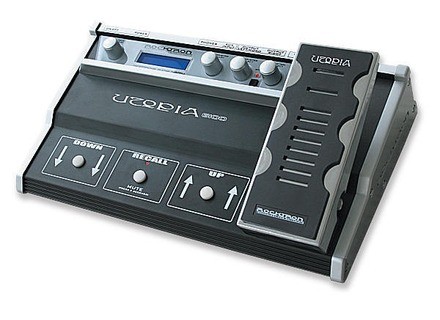 Anonymous 's review (This content has been automatically translated from French)" getting better but ..."

The manual is not always very clear, but we found it quickly. (There is not much pag
Editing sounds facile.On turns a button then another and then a third to rgler. On pressing store and it's over.

Effective effects, GPs, excellent. The Utopia offers 64 presets and 64 ditables such non ditables.
some factory presets j'vois how one can play with: irraliste.les others are used on or change qq little.
Clean sound that is top, like a lot of multi efffets are top. In the metal has sounds a bit plastoc.Mieux is keeping his amp / prampli and disto.Avec simulation hp / microphone with headphones, it's the best that everything I heard.
I love the sounds and cleans trash presets lord.La wah.La solidit.La simplicity.

Test mag in total music, bought on. I test Boss ME70 ME25 LINE 6 POD Digitech rp 150500 GSP 11O1 Rocktron prophesy and Digidesign Eleven Rack.
Lack a tuner !!! Presets and change the foot ncessite confirm.
To improve the device and make it the best of the best: put a tuner, an excellent metal distortion and change presets in one shot.
Did you find this review helpful?yesno
»

trudjer's review (This content has been automatically translated from French)

Rocktron Utopia G100
5
Come on, if you really want to know everything about this pedal: www.rocktron.com
They will explain everything better than me.


- Own sounds quickly create One arrives FROM THE SONS pr enregistrs (prsets these are also all well-pr-rules, which can be used as unlike a lot of other brands), one can find incredible sounds by modifying barely prsets, which quickly pass 3:00 edit its effects. Easy rgler (for basic rglages least)

- HEFTY: The pedal is designed to accomplish to last and endure massive (much bigger than I imagined) in any Mtal ...

- GOOD POINT: even if the amp simulations are trsrussies, we can put all counters to zero back on the legendary tone of the amp (I did not want to have 50 amp simulations while I love the sound of my own!)
So it is really a good point to create your own sounds FROM the original sound of the amp, just by adding a touch of a particular purpose.

The sound quality is up to its reputation, out of this world !!!
Well above anything I've test including my old pedal, yet not bad at all (ZOOM G2.1u)
The effects are almost all very soigns, it sounds very professional, nothing to do with its competitors: We are no longer in the same GRADE!
I play a little amp Blackheart lamps with a Strat (Lace Sensor single coils), or an Epiphone Wilshire (PAF humbuckers), although both sound very diffrentes beautifully with this pedal.
The effects are well doss, it's beautiful ... HOWEVER I regret just a little as 64 prsets, we stuck with a good 50aine distortions (admittedly very good) and very few clear sounds ... SNIF!
I like clean sounds that hover and distortion crunch / blues, and one has a majority of distos hard / Mtal ...
HAPPILY: after qqes minutes hacking one begins to find everything you want, and YOUPIIIIIIIIIIIIII !!!
I put 9 because only with more clean sounds pr-enregistrs, I would have had more bases from which I would have said my personal sound.
I have gained a little time, but it happens when even have the sounds you want, that's the main!

I use this pedal 8 months ago
The sound quality is by far what I better test multi-effect, really beautiful.
I possd ZOOM 4040, a Digitech a ZOOM G2 and quality ("extrieure and intrieure") is well above.
160 Euros bought secondhand, it's a great deal. That said we can now find new less than 230 Euros and even that price was the worth the shot, if only for the hard life that seems long enough

It is true that there are glitches in design ergonomics (qqes rglages avancs not easy to do without the manual), but forgets completely ds Premi re rating out of this magical little bote ...

With experience, I would do this choice eyes closed, plugs in the ears and feet and fists reading!
Did you find this review helpful?yesno
»

It is doing very well if you can read.

Many sounds without interest, as with many multi-effects, but you can create the 3 basic sounds: clean, crunch, big distortion.

For my part, used vehicle purchased new; I relisted a month after purchase on Le Bon Coin, then I RAVISE. Indeed, when his wife and children sleep, the machine becomes indispensable.
Either through headphones, but mostly just in a pair of computer speakers base is perfect for work in very small volume (cover blink-clang ropes ...) on a backing track You Tube.
Sound clean, crunch, a big distortion and Guingamp forward, as we say in my house!
However, the machine is poorly suited to stage performance; So, for this purpose, I strongly advises.

Fabio's review (This content has been automatically translated from French)

Rocktron Utopia G100
5
- 4 types of amp simulation (channel): Clean / Texas / British / Mega
- The effects of "basic": Chorus, Flanger, Phaser, Tremolo, Wha, Whammy, Delay Reverb. Here of 40 dozens of useless and unusable effects.
The effects are not cumulative (except reverb + delay that can be applied to each patch)
- The Hush: noise-gate house at Rocktron
- A compressor ... that compresses

No lamp in Utopia ... and not need it!
No MIDI or PC editor ... and no need either!
The connection is too basic: Guitar In, Stereo Out, Aux a (for an mp3 player for example), a headphone output.

The config is very simple, especially since the manual is very well done).
The setting is still accurate, efficient and sometimes requires subtlety, the parameters are still quite numerous.
Everything happens with only 3 knobs editing (section / parameter / value), it is far from the headlock of some competitors: the grip is really intuitive!
You can assign one or two parameters to the expression pedal, or else to a pedal and a knob to change preset (helpful during hacking sound)

Be careful to change system patch: there is no concept of bank / preset, just 3 buttons Up, Down, and Recall. Think playing "prepare" the next preset in advance and press to change its recall.
But in practice, it does not prove more difficult than juggling buttons to change bank and preset selection (IMHO).

At construction: the Utopia is built like a tank, all metal.
Pedal like a rock-solid. The 3 footswitches for switching patches are kind of rubber, small and flat, it is surprising but it is ultimately comfortable and less fragile than a basic inter plastoc.
The display is quite small, but very readable white on blue.
The editing knobs seem fragile, but are protected from inadvertent kick by a recess in the body of the beast.

So there ... I was on the ass! (But I think Raphhh has already said that lol)
This little trick there, with three buttons and the pedal I was completely amazed!
Live on the sound system (and stereo), the sound is monstrous: o)))

The effects are small but excellent and really does not "puff" no sound, and the whammy wha are also excellent (the whammy is 4 in 1: pitch shifter, detune, and Octaver harmonizer).
The Hush is devilishly effective: the channel Mega, a 10 gain can drop the guitar: no noise.

The clean sounds (clean channel) are beautiful, transparent, the texture of the Air Norton I particularly like is respected.
The British Channel is very good too, good hard-rock distortion of the heavy-metal.
The distortion channel is just monstrous Mega, especially by using the Scoop which as its name suggests widening the mediums.
I have not tested the channel from Texas to the factory presets, so no reviews yet ...
The simulation of HP seems very good too (I have little experience, but given the results ...), with a lot of settings to change the sound reproduction (HP type, position the microphone , reactance ,...)

Big plus for the factory presets are for every exploitable and often very good (long live the Recto-Fried!): Just a little down sometimes the effects and / or gain and that&#39;s it.

I was looking for a small multiFX / simulator that I can stroll around without a trainer and a rack 4 * 12 50 kg. I bought a little blind, have found little info and was not able to try it.
I use it for two months, connected to anything and everything (PC, HiFi, PA) ... it sounds, it makes you want to play, it&#39;s a real treat!
I play mostly prog-metal, I use an Ibanez RG7620 with DiMarzio Blaze rise and Air Norton and with my Swiss Cheese, I am extremely satisfied! (Actually, I do most of the rack is used almost lol)

What I like in Utopia: "only" 4 channels and effects "basic" but all of excellent quality, rather than simulations approximate 50 amp that does not interest me and 312 cumulative packet of twelve that useless ...
And a sytème editing simple and intuitive, rather than a gas plant.

Weakness: The changing system type patch up / down will not suit everyone. I did some point before ordering and I realized finally that I do that six or seven different sounds, which is very manageable with this type of interface.

Price / quality ratio, I think all the buried Utopia multi / simulators down to the edge of € 400/500. I would buy without hesitation (unless in the meantime a lot Rocktron "improved" version with a few more footswitch)
In two words: it&#39;s solid, it is easy to use and it sounds that you ask for: o)
Did you find this review helpful?yesno
»
Read the 9 user reviews on the Rocktron Utopia G100 »

Other Rocktron multi-Effects for Electric Guitar