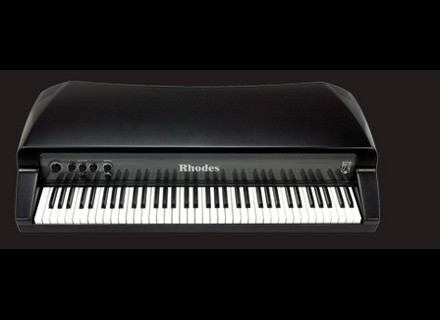 Rhodes Mark 7 Stage 73 A
The Rhodes Mark 7 is a modern design of the classic Rhodes electric piano. It has the look and sound of the classic pianos, but has the look of a modern instrument and shares the luxuries you would get when you get a newer instrument. In terms of tone control settings, the Rhodes Mark 7 has knobs for volume, three knobs for EQ, and a knob for controlling the tremolo effect. All of this is enclosed in a very well made and sturdy casing and I would think that one would have a pretty tough time breaking this instrument. It comes in three different sizes in terms of the number of keys, coming in with either 61, 73, or 88 keys. No matter which option you choose, the feel of the keys is awesome and is really always a pleasure to play because of its easy to play feel. The sound quality of the Rhodes Mark 7 is everything you would think it was and then some. It does just about a perfect job of getting the traditional Rhodes electric piano tones and then has more control settings than the originals do so you can get a wider array of different tones. The tremolo effect is awesome and I tend to have it on most of the time that I am using it because I like it so much. The price of the Rhodes Mark 7 is reasonable considering the great electric piano that you are getting that you can really have for a lifetime if it is treated properly. This instrument is designed for professional players looking for the best they can get regardless of the price, and this certainly fits that bill. All in all if you are a fan of the classic Rhodes piano series, you will not be disappointed by the Rhodes Mark 7.

olivier.peron.16's review (This content has been automatically translated from French)

Cause I have to duplicate divest me of my Rhodes Mark 7 (white) with stand
It almost never used ...
It is not guaranteed under (since 2 years already but is new!
Given the urgency I am ready to let him go 2800 euros,
Does this intresse someone
If you are interested I will send your pictures to show you the new condition
read
Did you find this review helpful?yesno
»

Rhodes Mark 7 Stage 73 A
Hello everyone,

I am stunned by the negative comments about Rhodes Mark 7 Many repairman Rhodes talk about it, without even having had a hands (enough to base their opinion).
The Rhodes Mark 7 I can tell you is that of the Series A (A for Active) Stage 73.
The clear advantage is that it is new, thus saving us a lot of trouble catering and other costly repairs. The other advantage is that it has a preamp configurable: you can work on three levels of EQ (bass, mid and treble) and tremolo (speed and depth). In addition, on the left side, there are several outputs (headphone, two XLR and two jack) and also for effects, a "send" and "return".
It is true that the structure that shapes the exterior of the Mark 7 is made of synthetic resin, the strength is not any proof. Inside was the same as the mechanical Rhodes Mark Mark I or II, for some wood pieces is replaced with plastic / resin. The keys are made of wood. Harp, tines, pickups are the same design as the Mark I and II.
This is in addition to a model, victim of prejudice purists and other nostalgic Mark I and II, is not widespread in France.
I think the models from Rhodes that made its prestige all have their peculiarities and their faults. Also, some were not appreciated in their time as much as their predecessors. It is true that Rhodes has exaggerated marketing of Mark 7 and created a huge expectation on a simple electric piano Rhodes 2000s that, the Mark 7 can only be different from its elders.
In use, I am fully satisfied: well rounded and deep (or fat) low airy highs, impeccable stereo tremolo.

14 of 16 people found this review helpful

The Rhodes 's Come Back

2 Published on 01/31/08
It's been almost 25 years since the legendary Rhodes brand disappeared from the scene. Now it's time for a come back.