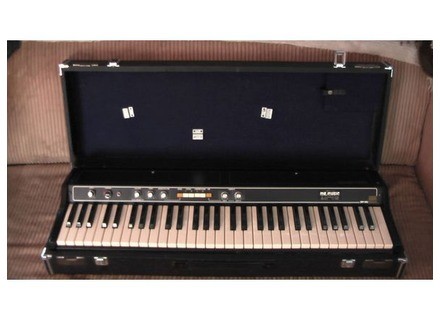 EP-30, Electric Piano from Roland in the EP series.

Roland EP-30
4
The Roland EP-30 is an electric piano that was made in the 1970's. There aren't too many of these around, but the studio that I work at has one of them that floats around from room to room. It's not an electric piano like a Rhodes or Wurlitzer, as it has it's own sound and goes beyond just being a traditional electric piano as it has a number of different preset sounds to choose from. For starters, the EP-30 has a series of 1/4" connections in the back for a sustain pedal, high and low impedance outputs, and for headphones. The keyboard itself spans five octaves and is fully polyphonic. It has it's own little suitcase that makes it easier to move around, although it is a bit heavy anyway. In terms of getting your sounds and all that, it's got a series of parameters and presets to work with on the front panel. It has separate controls for pitch (tuning), volume, tone, bass volume (for the bass preset), and preset buttons for two piano sounds, two harpsichord, a bass setting, and a vibrato effect that contains parameters for rate and depth. As you can probably tell from this description, it's a pretty simple keyboard to use, but at the same time it's kinda limited to the preset sounds on hand. While it definitely isn't the most flexible keyboard out there, the sounds that it does have are pretty nice sounding overall. The electric piano is it's own thing and isn't anything close to a Rhodes, but still sounds cool for what it is. The harpsichord and vibrato effects are also useful to have, but again not much room for changing the sound on the harpsichord. The EP-30 seems to be a pretty rare keyboard, but if you do come across one I'd say it's worth checking out. However, don't expect this to be a replacement for a full blown Rhodes or Wurlitzer electric piano.
Did you find this review helpful?yesno
»