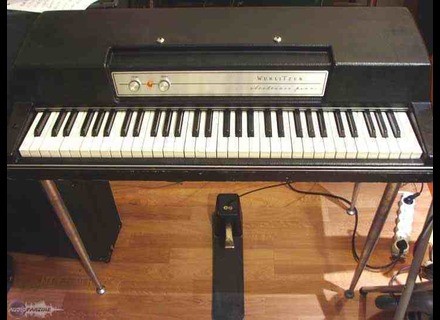 All user reviews for the Wurlitzer EP200

Wurlitzer EP200
5
The Wurlitzer electric piano was produced in various forms from 1955 to about 1982 and is one of rock music's iconic instruments; the keyboardist's equivalent of the Gibson SG or the Rickenbacker 4001 bass. In other words, not quite up there with the Les Paul (Hammond B3?) or the Fender Precision (Fender Rhodes piano?) but still a top-flight vintage instrument featured on hits from Ray Charles to Supertramp and beyond. Inside the instrument is a 64-key grand piano action whose hammers hit tuned steel reeds. The reeds' vibrations are amplified to produce the Wurlitzer's distinctive sweet yet punchy sound, more percussive and cutting than that of a Rhodes. The model I play is the EP-200, the first plastic-bodied model, produced between 1968 and 1975. I use it live and in the studio with an 11-piece ska band, The Skanx. I also play a Casio WK-3000 which I use for organ sounds, plus a Stylophone mini-synth.

My band, The Skanx bought the Wurlitzer early this year from a defunct band for about £500. This seems to be the low end of the price range; reconditioned ones can sell for as much as £2000. The original chrome legs and sustain pedal were included - a replacement set could easily cost £300. Previously I had been using a very good Wurlitzer patch on my Casio WK-3000, but when the real thing popped up we decided to try it out, initially on 6 months' loan. The first time the band saw and heard it they were blown away, and buying it became a priority. I used it on our debut mini-album and have been using it live and in the studio ever since.

It is my dream instrument. Let's face it - it's the real thing. It looks right, it sounds right, it feels right. The 64-note keyboard's action is fast and light yet responsive - like you wish a grand piano could be. I could play it for hours. And it's not trying to be anything it isn't. The controls are basic but sufficient - a volume/on-off control and a tremolo depth control. That's all you need. The two built-in speakers give plenty of volume for practice or acoustic jams, and there's a output jack underneath for an external amp. It's easy to set up too. Screw in the four legs, attach the sustain pedal's mechanical cable, plug in the power cord and you're ready to go. But most of all it's about the sound.

How can you criticize a 40-year-old instrument? Well, it is very sensitive to humidity - it can take up to 20 minutes to 'warm up' (i.e. burn off tiny droplets of moisture between the steel reeds and the electrostatic pickup plates), during which time it produces the most ear-splitting and unearthly screeches, buzzes, crackles and bangs. So you need to set up well in advance of the rest of the band! Also it's heavy - not like a real piano or even a Fender Rhodes, but you either need a strong roadie or two average band members to carry it. The legs are designed for seated playing rather than standing, but I have found a solution for this. Google 'elephant feet' if you want to know...

The keyboard and action are essentially those of a grand piano, scaled down; a marvel of woodwork. It simply wouldn't be cost-effective to make these things nowadays. The keys are slightly shorter than those of an acoustic piano but the same width. The shell is sturdy black ABS plastic on a thick plywood base. This thing is tough! The legs are chromed steel with small adjustable feet. The sustain pedal housing is made from black painted plywood with the pedal itself made from chromed steel. It attaches to the piano via a Bowden cable with a special adjustable clutch. The only vulnerable components are the steel reeds themselves which can reportedly become fatigued and eventually break as a result of hard playing. Replacements are fairly easily available, but fitting and tuning them is best left to an expert, so you will need to find a competent Wurlitzer tech if you decide to invest.

Ever since I started teaching myself to play keyboards at the age of 16 I have wanted one of these. I'm now 48 and I have finally achieved that dream. With all due respect to modern keyboard manufacturers, there is nothing like the real thing.