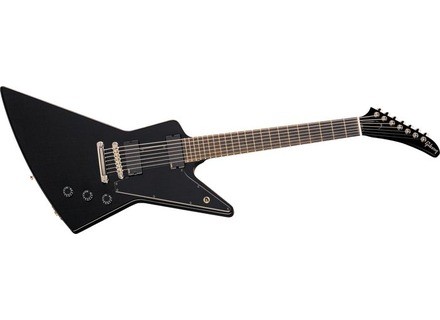 Gibson 7-String Explorer
5
Gibson was a little late to the party with this guitar and I think now it might be discontinued. This is the 7 string version of the Gibson Explorer. It has some good features and some bad features. Some of the good features is that it is pretty much a traditional Explorer. Two volume and a master tone with a 3 way switch. The fretboard is clean with no inlays which is cool but on a guitar this expensive they should have put on a ebony fretboard. The rosewood fretboard doesnt really fit with the rest of the black guitar. Gibson chose to use their traditional scale length which is not great for a 7 string. The neck 24.75 inch scale mahogany neck. Instead of trying to figure out their own 7 string pickups Gibson wisely choose to use EMG pickups. This guitar has a 707 in the neck and a 81 7 string version in the bridge. Because the pickups are active you will need to use a battery to power them. Gibson was nice to include a separate battery compartment so you dont have to open up the entire control cavity to change the battery for the pickups. The fact that it has EMG may be a reason why it might be discontinued now. I noticed that other Gothic models that use to come with EMG's have switched back to Gibson pickups.

The neck on this guitar is pretty big. Gibson decided not to use their 60s profile for this guitar. On 7 strings I prefer thinner necks to help compensate for the much wider necks. Gibson instead made the neck thicker. The Explorer shape gives great balance. When playing standing up the guitar will naturally come to rest in the perfect position for playing. I like fretboards with no inlays but it might be a problem for some people who have not been playing guitar as long. There are always markers on the side of the neck. The only problem with the EMG 7 string pickups is that they are so big they require a proprietary route. You would need major modifications to your guitar to change these pickups to another brand of 7 string pickups. The low B string on the stock set of strings is only a 59. I do not think this is enough for a low B on a 24.75 inch scale guitar. I have used a 60 low E string on 24.75 inch 6 strings before.

Thanks to the EMG pickups this guitar sounds great. The 707 in the neck is great. The 707 tonally is like a mix between the 85 and 81. It is nice and thick like the 85 but still has the top end attack of the 81. The 81 in the bridge is a grind machine. It brings the clarity. This helps make up for the short scale of the neck. With this short 24.75 inch scale on a 7 string the low B will be pretty loose and flubby. This would produce a muddy sound with anything but the tightest pickups. The 81 is really tight and has lots of high end bite. These good pickups and the large body of the Explorer makes this guitar sound huge. Explorers sound big as 6 strings and this is a 7 so it is gigantic. If you are feeling frisky you can do the 18v mod to the EMG pickups to get even more tone. The 18v mod helps give you more head room and will help the EMG sound more natural. This especially helps warm up the clean tones which are generally the weakest part of the EMG's.

I dont know why Gibson teases people like this. They will put out something great for a couple years then pull it without telling everyone. By the time everyone knows about it the guitar is out of production. Its like Gibson wants to make more metal guitars but does not want to commit to it. Oh well. If you have this guitar you are one of the lucky ones. If you are looking for a nice Gibson 7 string and you spot one of these you should grab it.

this type of guitar is dedicated only to metal with EMG results in a saturation and a big sound very quickly, a perfect sound with the microphone of the bridge for good rhythmic trash and a perfect sound for chorus neck pickup position,

I hate nothing in this guitar

I use this guitar for nearly a year and I can say this is the ideal guitar on stage and in studio for heavy metal TRILLGARD mdr not kidding aside, I think the price is resonable for a guitar of this qualitée, with this exploration, I learned to forget the other 7 string Ibanez I own in essential
Did you find this review helpful?yesno
»