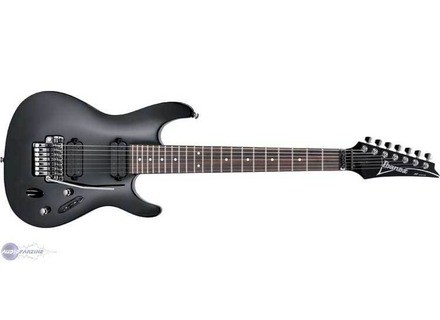 tongue's review (This content has been automatically translated from French)

origins of the strings are crap (the so-called Adario)

Excellent scratch
the pickups are actually surprisingly good!??
But the microphones on the AH row have a dirty sound if I remember correctly
new versions?
has confirmed
+ The main strength of this scratches the ZR tremolo
a floyd rose with all faults corrected
(Friction> wear> false not to mention the instability in the neutral position, design a knife absorbs a sustain block, normal)

only drawback in my opinion and size: only 22 boxes
from my point of view it's too bad I'm sorry ...

I have one for a week

the 24 cases have pointed their noses this year but in six strings ...

c not just a 'trick to metalheads'
Did you find this review helpful?yesno
»

synchronn's review (This content has been automatically translated from French)

The neck is really fast, access to acute is easy, nothing wrong with this level.
The balance of the set is nickel.

Metal for a game that's great, I used an old Vox AC30 model 74, with a big boss distortion is very warm and precise.
The microphone is very serious type, see too was used sparingly, more pleasant in his distotion clear that the micro Acute going very well both in solo rhythm.

I Aquis my S7320 since 3semaines, my first impression was his légertée, I have an old model S540 and the difference is obvious.
The ease of playing is very nice, extra fine handle adapted to fast play.
The two microphones and two INF1 deliver impressive power (surprising for microphones of origin).
The ZR tremolo is a delight, its adjustment system zero point, allows the spring tension free gallery and the blow in case of breakage of rope no disaster, the vibrato is not moving.
I play metal instead of mine and it is shaped to AC, but his reaction in his or light fuzz that is correct.
In summary, the value price of this guitar is very good for a 7-string of that quality, progress both tremolo and pickups are bluffing.
Feel free to contact me if you want further details.

I use it with a SansAmp GT2 plugged into the return of the effects loop of an amplifier all original lamp Soviet brand LM (100w with 4 Svetlana EL34 in preamp, the SansAmp is only on the last 12AX7, a Sovtek lps.). The baffle is a Framus 2x12 celestion v30.
I soon, after 10 days, turned the microphone acute. The pickups are ok but when I compared the sound of my esp eclipse (with seymour sh1 and 6) or my les paul standard and well, including distortion, the sound was much more poorly defined on the ibanez ...
I set up a bare Knuckles Nail Bomb in bridge is there .... it's huge, set, notes pierce the mix group and the grain is fantastic regardless of the use.

Purchased May 2, 2008.
This is my first 7 string, the adjustment period was very low!
It's a very nice guitar to play, the neck is fantastic, with its real microphones is huge ...
For the price I do not think there is a better 7 string.