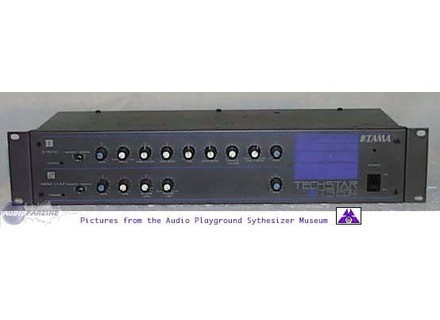 All user reviews for the Tama Techstar TS-204

nobazz's review (This content has been automatically translated from French)" a piece of history."

Tama Techstar TS-204
4
I've had it for about 2 years, I just sell it, need gold coins and lack of space. I used it in trig with a 2 BAR vintage that I have separate outputs, namely DDD1 Korg and Alesis HR16B, complementing the sound of them or Alesis D9 also driven by noon. I sent all in front of various effects in Ableton Sampler. I have tried Kamais on a drumkit ... I'm not a drummer.

I've never had a similar thing (analog modules drums) from the Simmons SDS8 sneak heard from a neighbor (thank you to you!) But that does not seem comparable (closest I think the Tama Techstar TAM500).

Instead it served me for two things:
> Give body to kick in addition to other bikes, what it does well without hyper hyper down low in infra. It sounds analog, somewhat unstable and very sensitive parameters even make what they call a synth and not a kick, so you can get the beep wooooooooooooooooooooow. After voila, used as kick himself must recognize that it is soft panty. impossible to get a quick attack and a powerful bass sound, to choose. It's a shame, I would have liked to have a kick with that slap. A échantilloner like bass sound, yeah ... blah. To double rhythmic it does. And we can play on the parameters to give a little life to the set.

> The clap ... Ah ... old school hiphop disco funky house clap. Synthetic, not realistic, but that sounds. I already regret having sold just for him, just because I should have done me a beast of samples that clap library. The reverb that goes with metal rings and it is very short, it's crappy to her character. Yeah, it's a good clap.

After must recognize that I am not necessarily a purist, and it took a lot of room for what I did. But the thing I liked, because his sound has him, his fine-tuning his living nearby.

+1 For the clap, unfortunately for me just for a little kick. But part of history.