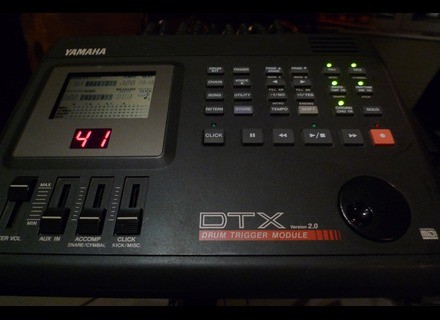 All user reviews for the Yamaha DTX V2.0 Module

Yamaha DTX V2.0 Module
4
I use this unit for several months. I bought a few months ago, OCCAZ of course, to sound with an Alesis DM5 Kit pads. So I do not have the original Yamaha pads, only controller charley. Attention controller charley requires a stereo cable.

According to the doc and forums, there was a first version before 1999, and the new V2.0 with additional kits. The model I use dates from 2001.

Honestly for a beginner, it's almost too simple: the module can be used on electronic drum pads on the sensors mounted on acoustic drums, but also with drum sequencer and MIDI interface. I was confined to the first function. The backing tracks are ugly but practical to learn to play. Once the operation assimilated, it is a good unit with lots of adjustable parameters that are not found on simpler modules "entry level" newer and more expensive (Roland TD3, TD6 ...), such as knobs for adjusting levels of support ...

I can compare it with what I know, so the modules and Roland TD3 TD6. The bank kits V2.0 is between the two: the richest TD3, unless the TD6. There are many kits sound very realistic and natural, less electronic kits and bizarre than Roland. It still feels that the synthesizer sounds embedded produces sounds less natural than some kits Roland, closer to the sounds of a real acoustic drums. There is a good generation gap. The feeling hi-hat controller seems a lot worse. But most of the kits sound sound good.

I was looking for a module OCCAZ cheap to train and play at night without disturbing my family. For this is good. If it again I would take one module but with more basic kits acoustic sounds better, so a newer module (Roland TD6 in particular).

In addition, there is the overall quality of Yamaha products: ergonomics, ruggedness, sound quality (for the time).
Did you find this review helpful?yesno
Cookies help us improve performance, enhance user experience and deliver our services. By using our services, you agree to our use of cookies. Find out more.