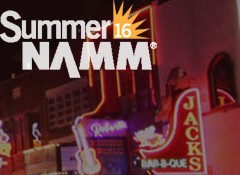 The audio world meets once again in Nashville for the new Summer edition of the NAMM Show. Audiofanzine is also part of the journey to cover the event and bring you the best of the new gear that is introduced during this hot weekend: music instruments, studio, DJ and live gear, you won't miss anything.