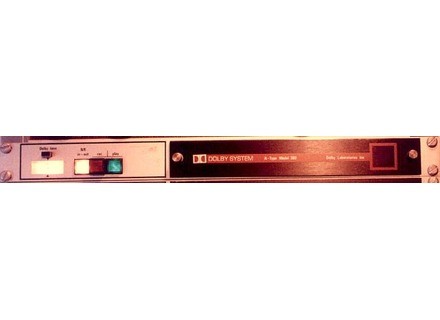 Dolby Model 360
5
The Dolby Model 360 is a simple noise reduction unit, that was originally designed for use with tape, and most likely designed specifically for tape hiss. I honestly don't know all that much about the origins of the 360, but we've got a pair of them in our studio A at the studio where I work. I must admit that I haven't seen them get used very much, but I have played with them a bit to see what they were all about. It's already hooked up to our patch bay, so I don't know the connections that it has in the back since I made all of the connections with the bay. It is a rack mountable piece of gear and will only take up a single space.

There isn't much at all to using the Dolby Model 360. There aren't any real parameters or anything, so it isn't like you can set what you'd like to be filtered here. Since it was designed for use with tape, the buttons that it does have are pretty much all for using it with a tape machine. It would be seriously hard to find a manual for the 360, nor would one be necessary.

The Dolby Model 360 is actually pretty good at getting out unwanted noise or tape hiss. Unfortunately you don't have much control over what you can do in terms of parameters, but in situations where you've got some simple hiss or noise, more times than not it will get it out. Still, I'd usually opt to use something where I have more control, or just use equalization to do the job. So while not as in depth as most modern day noise reduction units, these will still get the job done, especially if you're using tape.

While I can't say that I'd recommend seeking out a Dolby Model 360 noise reduction unit, if you have some around they're worth the space. They do the job fine for taking out simple tape hiss or noise, but aren't very in depth and certainly aren't flexible. If you could find one of these, they definitely wouldn't be too expensive. Even so, I'd only recommend picking one up if you're going to be using it in a professional studio environment, where you never know when something might be needed...