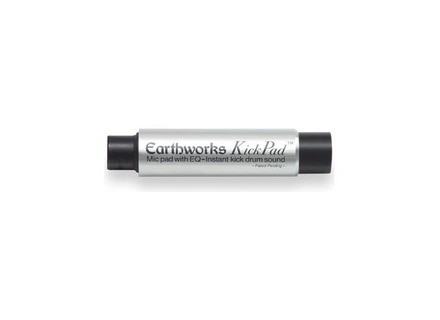 The KickPad KP1 works with almost all dynamic, ribbon, and condenser microphones but depending on how good the microphone is will still dictate how good the kick will sound.

When it comes to kick drum sounds it will always depend on the microphone and the microphone placement in correlation to the surrounding environment. So even the KickPad KP1 might not give you the perfect sound right out of the gate and you might have to do some experimenting with placement but it will not hurt to have this at all. Using the KickPad KP1 will give you ( with proper placement) a great thick kick drum sound with enough punch to slice right through your mix and if you are playing live with it, it could be just what you need to bring that kick out in front of all of the other sounds that may be going on. For the price that this cost it is a must have, I have seen similar devices cost almost double.

Earthworks KP-1 Kick Pad
5
The Earthworks KP-1 Kick Pad is a unique device designed to give you an 'instant' kick drum sound.  You simply place this in between your microphone and your console or audio interface and the built in EQ will color your sound in a way that gives you a tighter kick drum sound.  It has standard male and female XLR connections and is an analog unit.

The set up of the Earthworks KP-1 Kick Pad is easier than setting up pretty much anything.  Simply plug this on your microphone and run the mic cable to your console and you're all set to go.  While I can see why a lot of engineers wouldn't want to color your sound without getting a dry signal, I would recommend trying this out and comparing your sound with and without it as it will work better in some situations than in others.  I've never seen or paid attention to the manual to the Earthworks KP-1 Kick Pad because there isn't anything you need to know that isn't right in front of your face while you are using it.

The sound that you get with the Earthworks KP-1 Kick Pad is pretty great and is honestly a lot better than I thought it would be.  I know that Earthworks is a great company but whenever anyone tells me that I can get an 'instant' sound or instant anything I tend to be a bit skeptical.  However, from the first use I realized that the Earthworks KP-1 Kick Pad was a pretty nifty and cool little device.  It definitely makes your sound a bit tighter as it applies EQ to the right frequencies for a punchy and full kick drum.  Like I said earlier, while this does sound good for most things I would highly recommend trying it out on every session to see if you want to use it or not as you never know what will work and what will not work in certain situations.

I've had the Earthworks KP-1 Kick Pad for about three years or so and I'm definitely glad to have it in my rig as I tend to use it a lot.  The price is only $100 USD and I believe it is great for home studio owners who might not be privileged to the best sounding microphones or pre-amps as this will help to get you a cleaner and crisper kick drum sounds.  However, this isn't for everyone and I can definitely understand if you like to record your sounds dry and play with them later.  All in all though this is a pretty great little device.
Did you find this review helpful?yesno
»