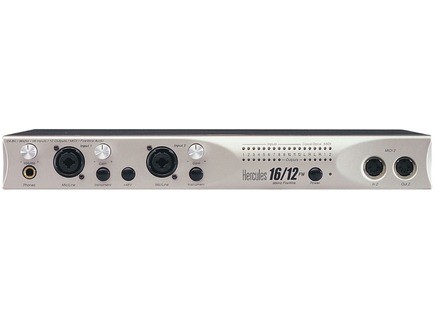 Cpierredon's review (This content has been automatically translated from French)

Hercules 16/12 FW
1
-What Technical characteristics have motivated your choice?
I do not achterais this sound card, even if it is exclente. The reason: its brand.
monitoring the isis card has told me a lot about the Manire guillemot which treats its customers.
So we just do well coupon of Enfert if there are no srieux technical, this card is not a toy.
- For what purpose?
not beyond 10 years after it is too large.
- What is your config (Map mother / CPU / Ram / Hard, ...)?

I would not dare to put on my computer
Guillemot took us for fools once, not two, thank you.

- Are the drivers stable?
- Are they often put day?

is still waiting guillemot gives dvellopeurs indpendant the secrets of his card for real dvelloppeurs working on a version of win xp or linux ...

- With the exprience, you do again this choice ...?

with the experience, I would not give advice to buy from guillemot has those I really want evil.

As we prten belly something 699 and we are ready to let go the less than 400, we can not ask questions ????
Did you find this review helpful?yesno
»

torronteranc's review (This content has been automatically translated from French)

Hercules 16/12 FW
1
Before purchasing this card, think, ask Watchlist how long you intend to keep it. I do not own this card, but I have acquired a top studio isis (of the same manufacturer) and when we see the follow-up agreement is their product, it would be this: Jupiter Card became opsolette within two years. In fact as you could see it on the forums isis attractive card, hercules (c guillemot same) do not find useful to follow her right product to create drivers for Windows XP. So think before you make the purchase of this card because if a new operating system (post XP) came to see the day (and this necessarily happen), you may find yourself in a bind because it would make etonant that hercules the effort to create the new drivers. A word to salvation.

I need regular.
Did you find this review helpful?yesno
»

klyg's review (This content has been automatically translated from French)

Hercules 16/12 FW
1
Former owner of Isis, I also have two graphics cards Guillemot. I have all poses problems of instability, boot, non-recognition, conflict ... I have trouble swallowing the sauce "Guillemauve & Hercules" now offers a Firewire card for professional paces. I've been trying but I abstain forever, and I can only advise to forget this SHAMEFUL brand, and turn to the safe brands. I personally have an m-audio Firewire 410 and I prepared my first CD with now, no need to Apogee or RME PROSONUS or because the quality is more than enough, what matters is the musician and music! Only regret with the 410, it was cool to have 10 inputs 4 outputs because that really serves 10 outings, home studio, with NUENDO?
Greetings to all creators.

Null
Did you find this review helpful?yesno
»

Hercules 16/12 FW
5
I mainly purchased this for its many among important as well as its price.
I use it mostly for MIDI recording. Sometimes audio with a condenser microphone.
I possde a laptop equipped with an Intel Core Duo (2x2 GHz) and 2GB RAM.

No problem during installation.
No problem of incompatibilits.
The manual is pretty clear and franais.

Drivers are stable with my configuration.
I mainly use this card with Sony Acid Pro 6 and I am thrilled.
Latency is almost zero (PS: I like ASIO).
I admit never having test more than 2 tracks simultaneous recording.
The pramplis are not as bad as I had heard.

I use this card for 2 years now.
What I like most: The simplicity the efficiency price.

The big downside of this card, it's food. Its power is well below what the card application to function properly. With pramplis branchs, 20 min from overheating diet. So I replaced with a universal laptop power (15 VDC, 3.5 A). From: happiness.

By consquent I have only give you advice: If you buy this card, change the power supply!
Did you find this review helpful?yesno
»
Read the 16 user reviews on the Hercules 16/12 FW »

Hercules 16/12 FW manuals and other files