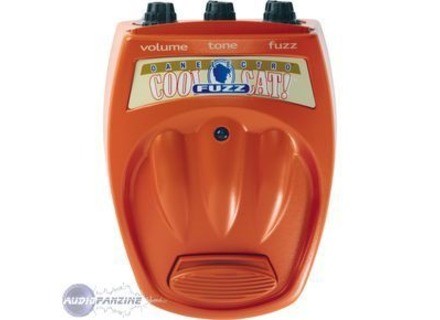 All user reviews for the Danelectro CF-1 Fuzz

Average Score:4.5( 4.5/5 based on 4 reviews )
Value For Money : Excellent
Not satisfied with those reviews?
Our members also liked:

Danelectro CF-1 Fuzz
4
Fuzz pedal with a big range in gain and plenty of output. 3 basic controls that shouldn't cause any problems. I assume it's an analog pedal. The look of the range might not be for everybody but I like how it is different from the norm.

Getting the most out of a fuzz pedal, you need to find the sweet spot for what you want and like with all fuzz-pedals, the gain and volume control have a big impact. With the gain low, you can get a sort of fuzzy od tone that works well to get more sustain and fattnes if you run it into a gain channel. With the gain flat out, there's huge gobs of sustain and distortion going on. Unlike other fuzz-pedals, the Coolcat fuzz works well with different amps and situations. It’s not a vintage correct fuzz, which is different for everybody, but just an allround, good sounding fuzz. With the gain dimed you can get that gated fuzz kinda sound, I have never been able to use it but it’s there if you want it.

I'm not a big fuzz user but I like it sometimes and the CoolCat fuzz is great fun to play with. I prefer running a fuzz into a dirty clean OR having the gain low on the fuzz pedal and run it into an od-tone to smooth things out and to get a big fat lead tone. Using it into an od-tone, you can get a wide range of tones from your volume control and that's no different with the CoolCat Fuzz. You could do an entire gig with this if you know how to work the guitar controls (everybody should know that!). Most of the time, I run it into an od pedal and then into a clean amp, this works best for me.

Big tone for big fun. Quirky looks that I like a lot and amazing tone for the money.
Did you find this review helpful?yesno

Danelectro CF-1 Fuzz
4
This is a fuzz box, nothing more, nothing less. It's old-school, so it can't be edited on the computer, or with MIDI. It's an analog pedal that isn't rackable.

I really like the classic fuzz sound that this thing produces. My only complaint is its lack of diversity in tone. But that's not that big a deal. The main selling point of this pedal is that it's almost dirt cheap. I've never seen it go for more than fifty bucks. I'm pretty happy with this. THere's certainly better distortion pedals out there, but none as cheap as this. For you guys who are hurting from the recession, this is a great temporary (or who knows, perhaps permanent) solution.
Did you find this review helpful?yesno

Danelectro CF-1 Fuzz
5
Fuzz pedal basic analog input and output jack, power supply or battery Three knobs: volume, gain, tone It lacks a bass control that are very (too?) Present, and tone of knob crachouille now even lowered strongly overall volume if not properly set (perhaps a simple dismantling and slagging enough, I'll think about it). For the rest, it's solid you can not say otherwise. I really enjoy the retro look is fun.
edit: I spent the product in the tone of knob, crachouilli problem solved.

This is obviously a simple arch. The volume is never fully, three-quarter is already very heavy. The headroom is also consistent and the tone is mostly a sharp filter that is also effective. Overall, there is a sound and do not say we arrive at the change of masses in fiddling. I still think is the case with all pedals in general, if we know what we love as his, we should never have needed three hours to try a product, I think.

So my opinion is different. I have long had a bias on the fuzz (his screaming makes bzzz), I had never even looked at them, and then one day ... but it's like oh I love that tears actually it's a fuzz! It could have very fat sounds! Ooh there will have to stick to it. So buying at random from this pedal really cheap. In the end, all alone I like it with very little gain (or almost not) for a clean sound: it gives the consistency is really nice. With more gain, well there's still this side of garish (it is perhaps not the right word, but speaking anyway) that I stuck with the image of fuzz, plus as the j have said lots of bass but ... I find it super precise side of the attack (the inverse of a biff muff for my taste) and the like having a built-in noise gate. Once you touch the strings a bit, the sound stops immediately. So where this pedal is great is when it is coupled with an overdrive. The jekyll my Jekyll and Hyde, loaded medium, with a gain resonance, and the cool cat fuzz behind: DEADLY! Potato, fat is raging, is warm, well balanced ... With my telecaster baja in the bridge position, it's terrible. The rock sound I wanted. The only drawback on my Les Paul Majesty (super Korean brand in passing) that has more bass, the problem of bass pedal is felt, and I can not really change just guitar without changing the EQ setting .

I've had two years I think I tested the big muff, but without more, the price / quality ratio is excellent, and I use that fact, she is mortal, nothing else to say .

I've had two months and I'm glad trs, push button started to walk
is fairly easy and I look strong and knobs derrire is less convenient than it is good but it made the world Danelectro!

Dcrire difficult since it is a fuzz the very first time I have a fuzz, but I think it's rather a fuzz sixties seventies garage that's big muff or fuzzface must be said that the price for 28 Euro adchire still okay, the cool cat pedals (metal fuzz distortion overdrive chorus) have a trs volume (power) and a trs's warm enough diffrent of pedals a boss who's thinner, but colder, with the cool cat fuzz I add a bit of a super overdrive boss to refine the sound and you get a sound of the cramps poison ivy or have a sound the sonics litters of the garage or the sixties note that I play on an old amp Giannini 70's 50 watt transisitor and a layer of luxury to us lacks a bit of fishing and spends too much has with these pedals boosts a lot

Trs good fuzz pedals but will not please everyone SERIES I like this cool cat because I also distortion, metal, transparent and drive chorus frankly for the price I am a bit derrire the rest, to stay polite, I also have the pedalboard that goes with it for 5 pedals and is handy with cables and power supply provided
Danelectro I think they were very cool with the cat and I think I'll order the rest of the series! but not immediately because next week I'll reevoir my new guitar, a Danelectro Longhorn blackburst I ordered on the net without having to try but good for the price I might not have much if it's as good the pedals!

has been over a month since I returned I reu the longhorn yet I paid 285 euros on the net and the price of one in his amazing garage rock and excels in surfin with a good reverb and a good drive transparent
Did you find this review helpful?yesno
Cookies help us improve performance, enhance user experience and deliver our services. By using our services, you agree to our use of cookies. Find out more.